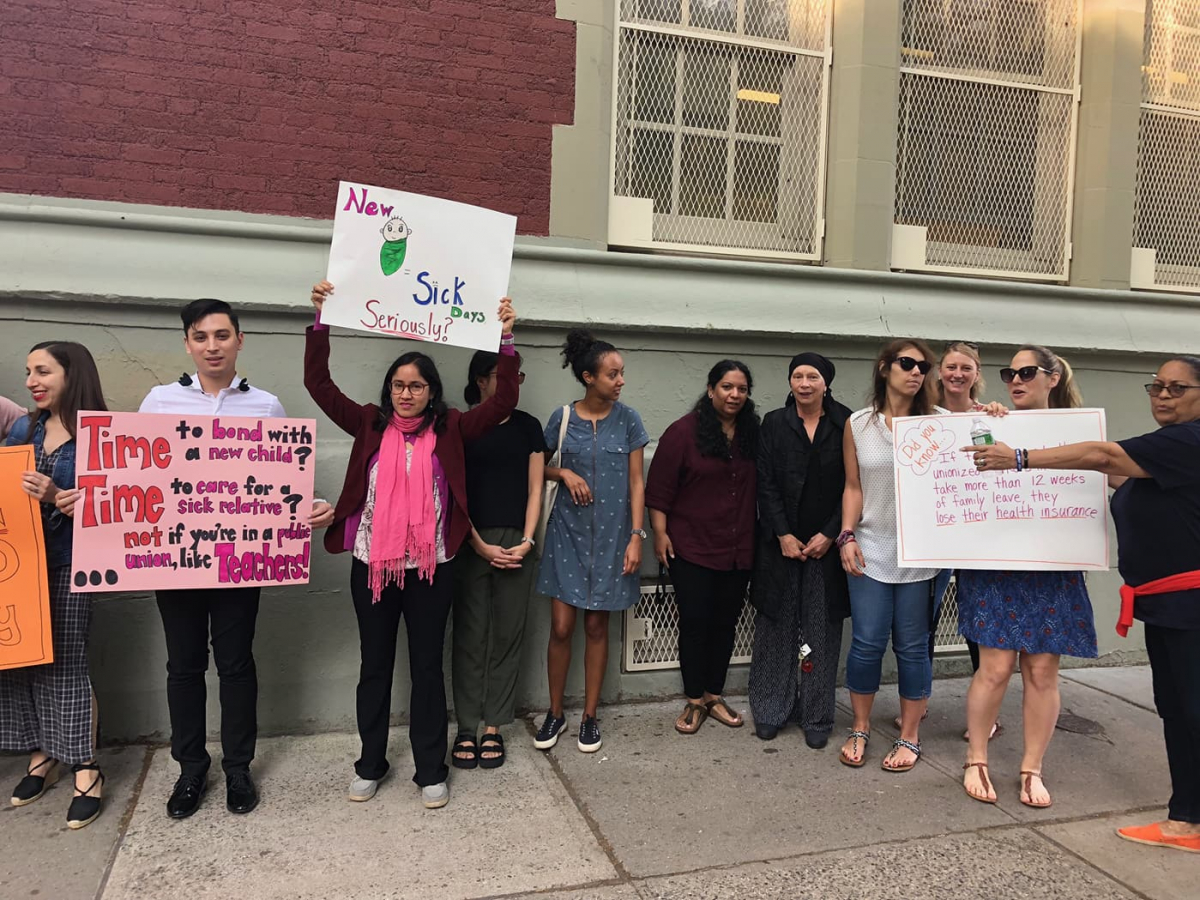 The good news: this contract codifies a family leave plan, something rank-and-file teachers had pushed for. The bad news: Teachers, not the city, are footing the bill. Photo: MORE UFT

My union, the United Federation of Teachers, representing 80,000 active school employees, has reached a new three-year agreement with New York City. It was announced over the weekend that the contract had been approved by an 87 percent vote. The Occupational and Physical Therapists chapter, however, voted it down.

This year the UFT had a tremendous opportunity to capitalize on the momentum of last school year’s wave of teacher militancy across the South. Our union could have mobilized members, developed a bargaining platform with the community, and built alliances with other public sector unions that are feeling the squeeze on their health care and wages after years of concessions.

Unfortunately, the union chose instead to rely on a familiar strategy of closed-door negotiations with “friendly” politicians, in a Democratic city with a progressive mayor who depends on support from the city’s unions.

These are the two possible directions that teacher unions can take in the wake of the Janus decision. One path is to come out swinging and use workers’ economic power to strike, building community alliances and organizing a citywide working-class movement. This is the approach of United Teachers Los Angeles, currently mobilizing for a citywide strike.

The other path is what the UFT is doing—cozying up to politicians in hopes of finding “win-win” solutions, which always end up favoring management over workers.

To put this year’s contract in context, we have to go back to the last bargaining round between New York City and its unions, in 2014. Under the previous mayor, right-wing billionaire Michael Bloomberg, city unions had reached a bargaining stalemate. By the end of Bloomberg’s term, every single public sector union in New York City had been without a contract for years.

His replacement, Democrat Bill De Blasio, campaigned under the slogan “A Tale of Two Cities” and promised to confront runaway income inequality in one of the country’s most unequal and expensive cities. Despite having endorsed one of De Blasio’s more conservative challengers in the Democratic primary, the UFT welcomed the new mayor as a friendlier face for the labor movement.

However, years without contracts meant thousands of city workers were owed, cumulatively, millions of dollars in back pay. De Blasio and the teachers union worked out a deal—thousands of dollars would be doled out over the next five years in small, regular payments, including the two largest payments after the contract expired.

Those who resigned from the system—a substantial number, considering the increasing rate of turnover in the profession—would forfeit their remaining back pay. In the meantime, the city could hold onto the money, earn interest, and wait for teachers to resign, thus lowering its overall price tag.

What’s more, wage increases would barely keep pace with inflation, and city unions jointly agreed to ongoing cost savings in our health care plans, with unions tasked with finding places to cut. This has resulted in a whittling away of health care options for teachers and an increase in co-pays.

Then came “Red for Ed” this past spring. Starting in West Virginia, then spreading to Arizona and several other states, educators mobilized statewide strikes and job actions against mostly Republican state legislatures, demanding increased funding for public schools and higher wages for educators in states that rank near the bottom in per-pupil funding and teacher wages.

Teachers in New York watching the inspiring struggle of our colleagues across the South hoped some of that energy would come to New York in the shape of a dynamic, energized contract campaign.

The Movement of Rank-and-File Educators, a reform caucus in the union, had been organizing around the issue for years, including bringing a petition to the delegate assembly in 2016. As James’ petition began to pick up steam, MORE organized forums and marches, pushing the union to take up the issue and mobilize members.

For a workforce made up mostly of women caring for and educating over a million students every day, the lack of a civilized parental leave policy was a widely and deeply felt injustice. Many teachers had to save up their sick days in order to stay home with their babies. Often it took new mothers years to earn back enough sick days to replenish their sick-day bank.

The good news: the city and union were able to negotiate a family leave plan, which this contract codifies. This is an important reform for teachers.

The bad news: Teachers, not the city, are footing the bill. The program actually takes in more money than it gives out, under a complex system of contributions, payments, and reimbursements. And its launch will be funded by delaying the start date of the new contract by several months, thus delaying wage increases.

RUSHED TO A VOTE

Eager to head off any rank-and-file opposition, the city and the union reached a memorandum of agreement early and fast-tracked the vote by calling an “emergency” delegate assembly less than 24 hours after the ink was dry. Delegates got no time to read the more-than-60-page document.

The previous contract wasn’t set to expire for months. There was no justification for rushing the new one past the membership.

The new contract continues a number of patterns established with the last one, starting with a disappointing 7.5 percent wage increase over three years. While this sounds good on paper, it falls behind the projected local inflation rate, which means a slight reduction in teachers’ actual purchasing power over the life of the contract.

New York’s affordable housing crisis, with ever-escalating rents, makes the increase even more inadequate—all while the city sits on a multibillion-dollar budget surplus.

We will also be giving up $1.1 billion on health care, primarily by introducing a new second-tier health plan that all new teachers will be in for one year. Incoming teachers will also have a harder time attaining salary increases by furthering their education, because the agreement limits the options available for new teachers to earn extra credits beyond their master’s degree.

Contrast this meager package with the gains Arizona teachers made last year after their historic statewide strike. Inspired by the explosive statewide teacher strike in West Virginia, rank-and-file teachers organized a massive campaign to demand increased school funding and pay increases. Going up against a hostile statehouse filled with Republican lawmakers, they were able to win a 20 percent wage increase.

The new UFT agreement also builds on another problematic aspect of the last contract, which is the creation of even more out-of-classroom positions for teachers.

These “teacher leadership” positions offer bonuses of thousands of dollars for taking on jobs such as mentoring new teachers, coordinating professional development, and doing various administrative and bureaucratic tasks. It amounts to a sort of backdoor merit-pay scheme—administrators at the school level will choose a select few to receive pay differentials, while wages remain stagnant for the vast majority of classroom teachers.

Merit-pay schemes are prone to favoritism. By introducing this kind of competition into the workforce, these schemes undermine union solidarity, which is why teacher unions have traditionally resisted merit pay. Most of these ideas have been pushed by the corporate school-reform lobby. The UFT is continuing the traditional business union practice of adopting aspects of school reform as its own.

What’s more, because these tasks remove teachers from the classroom, the net effect is to increase class sizes. New York City teachers have not had a class-size reduction in 50 years, and this contract is no different.

The contract also offers a $5,000-$8,000 annual pay differential through its “Bronx Plan” to incentivize teachers to fill shortage areas in designated “hard to staff” schools.

New York City’s schools are grouped into 32 community school districts, all covered by the same union contract. The UFT has reported that six out of the 12 districts with the highest resignation rates are concentrated in the Bronx, one of the poorest urban counties in the country. The same week the agreement was released, the New York Times reported that homelessness in New York City schools had reached a record high of 114,659 students, roughly 10 percent of the student body, with a high concentration in Bronx schools.

By using such a small-bore method as a pay differential instead of trying to rectify larger economic issues affecting the community, the UFT is missing an opportunity to organize with the community around these deeply felt injustices, which affect learning every day.

“One Bronx school I worked at leaked and flooded when it rained,” said Anne Looser, a UFT delegate at High School of Fashion Industries in Manhattan.

“In terms of basic staffing, nearly all of the schools in the Bronx are broken into small schools of less than 500 students,” she said. “This makes creating programs for high-needs learners very difficult. In order to provide special education services to my students, I literally had to do something different every period. These issues are not addressed by the Bronx plan.”

A more ambitious union might have reached out to people in the Bronx who were struggling to find housing and built a campaign for affordable housing, or to raise the minimum wage. Instead the UFT is merely negotiating small advantages for specific teachers among its own membership. This is a far cry from the sweeping visions promoted by more militant unions in L.A. and Chicago for economic reforms to lift up the entire city’s working class.

While the contract was ratified by most of the membership, the one chapter of the union that voted it down was the Occupational and Physical Therapists.

These highly skilled workers have had longstanding grievances about their lack of pay parity with teachers—they top out at less than 60 percent of teachers' top pay rate. They have been organizing for months on social media. They demanded—and got—a meeting with UFT President Michael Mulgrew, where they brought signs demanding pay equity and pressured the leadership about their disappointing wage package.

“He said the city was intransigent, that the OT/PT chapter was singled out and the city was as determined to give us nothing,” said Judy Loebl, a physical therapist. “We have master’s [degrees] and doctorates, it makes no sense that we are paid less.”

Mulgrew told them in no uncertain terms that if they rejected the contract, the UFT would not be renogotiating on their behalf. Essentially he told OT/PT staff that they would have to go without a contract in this round if they voted no.

The danger of such arrogance from the leadership in a post-Janus environment is clear. It’s demoralizing for members and provokes anti-union attitudes.

“Members have all sorts of ideas in response to this,” says Marilena Marchetti, an occupational therapist. “People are looking for ways to apply pressure on the leadership, and some think by withholding dues, they might be able to do that.”

Marchetti moved to New York from Chicago, where she had organized as a member of the CORE caucus, which led the union’s historic strike in 2012.

“The Chicago Teachers Union popularized the slogan ‘Our working conditions are our students’ learning conditions,’” Marchetti said. “That experience taught me a lesson: when unions fight in solidarity with people who share their class interests against institutionalized greed and the starving of public services, we can win. That seems to be a better way of doing business with the boss than the UFT’s approach.”

Kevin Prosen is a middle school teacher in Queens, New York, and a member of the Movement of Rank-and-File Educators, a social justice caucus in the UFT.

CORRECTION: This article originally stated that OT/PTs on average make half what teachers do. It has been corrected to state that their top pay rate is less than 60 percent of teachers' top pay rate.