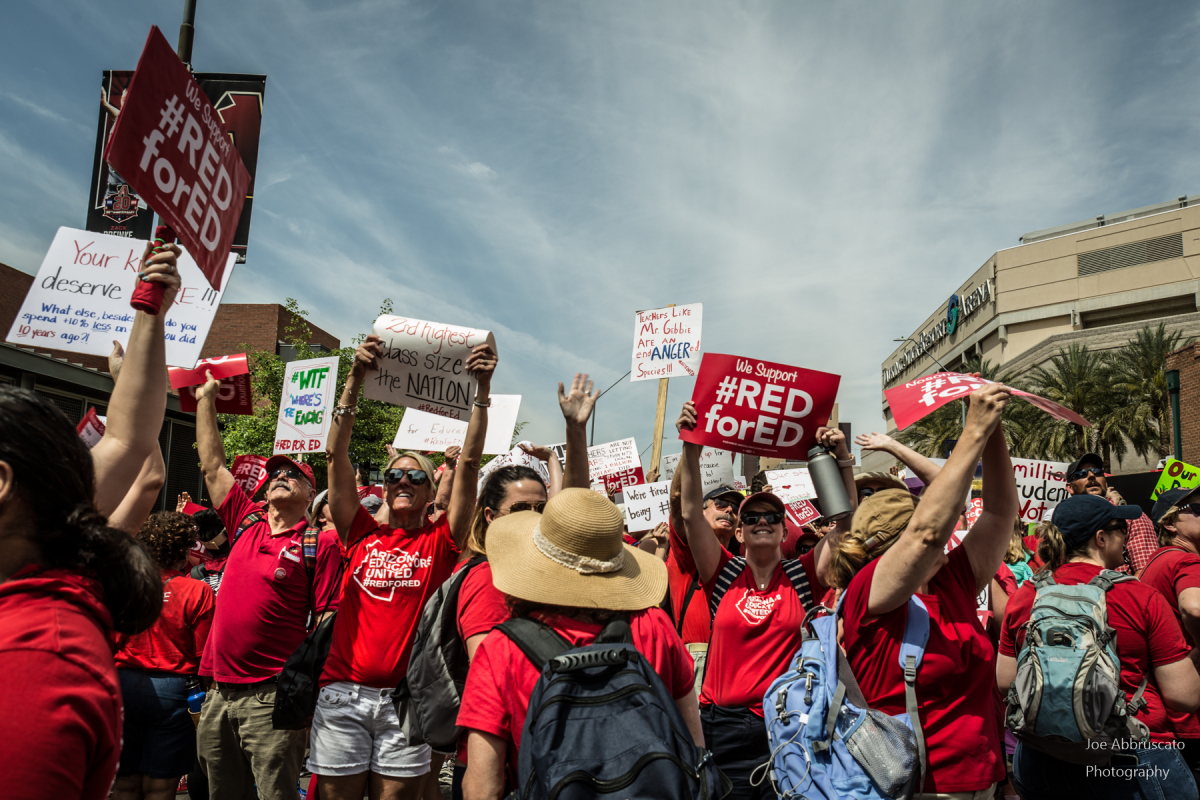 What can we learn from the teacher uprising that’s drawing national attention to the devastation wrought by budget cuts? Photo credit: Joe Abbruscato, Creative Commons

Teachers Make Gains When They Make Trouble, by Samantha Winslow

What can we learn from the teacher uprising that’s drawing national attention to the devastation wrought by budget cuts?

The scale is unprecedented, but the nation’s poorest-paid teachers are following the same playbook that Chicago teachers did in 2012: build power at the workplace, tap into issues members care about, think big.

These lessons have been a long time coming. The 2008 economic collapse created a crisis for state and local governments—and for public sector workers.

Anti-union politicians took immediate advantage of the crisis. Democrats and Republicans agreed: lazy, out-of-touch workers would to have to give up their benefits to get us all out of debt.

Public sector unions were caught flatfooted, even in traditionally blue states like Michigan and Wisconsin. Union leaders excited about the possibilities of the new Obama administration weren’t prepared for the conservative backlash. The attacks worsened after the 2010 midterms flipped many statehouses red.

The grassroots resistance to Wisconsin Governor Scott Walker’s anti-union bill in 2011 was inspiring: teacher sickouts, a paralyzing occupation of the state capital, hundreds of thousands of protestors. But unions opted to offer massive concessions in the hopes that Walker wouldn’t go for everything. He did anyway.

Where unions were already weak, legislatures took a hatchet to what rights were left—exclusive representation, dues deduction—and to public budgets, particularly for schools.

The focus on electoral politics hasn’t helped. Neither has the “keep your head down” strategy. Many unions tried to wait out the recession—give concessions, partner with privatizers, and hope they won’t go full Wisconsin on us.

We saw teachers unions cut deals to mitigate the damage, hyping two-tier concessions as “victories” in Newark and Baltimore. Statewide union leaders in Massachusetts, scared to face off against corporate education reformers at the legislature, instead backed a “less bad” package that restricted collective bargaining rights.

But all the while a different current has been gathering strength, as teachers make Chicago-style trouble in unexpected places.

Reformers won leadership in a number of teachers unions, including in Los Angeles, Hawaii, and Boston. Massachusetts teachers elected a president who worked with a caucus to build members’ leadership district by district. When privatizers came back with a ballot initiative to expand charter schools, the union chose to fight rather than compromise—and teachers defeated the privatizers 2 to 1 at the polls.

A national network has taken shape. Teacher activists—some leading their unions, others operating as caucuses, as in Baltimore, Philadelphia, New York, and Denver—troubleshoot tactics and develop a shared vision for the schools their students deserve. Many compared notes with West Virginia, Arizona, and Kentucky teachers at this year’s Labor Notes Conference.

After Chicago teachers stuck their necks out, Mayor Rahm Emanuel tried to make an example of them. Instead, their spirit of resistance is spreading.

Teachers are rooted in every city and state. They can easily connect the dots from their workplace issues to the lives of their students and communities.

Still, teachers aren’t unique. Don’t forget—10 years ago they were public enemy number one. Their uprising should inspire workers across the board.

To underpaid teachers (and workers) everywhere, Arizona’s Brittani Karbginsky offers this advice: “As a starting point, share your story. Tell people why you’re angry, and why it’s not getting better.

Samantha Winslow is co-director of Labor Notes.samantha@labornotes.org
Related
As Omicron Rages, Teachers and Students Fight for Safety Measures in Chicago and Elsewhere »
Teachers Strike against a ‘Heartless’ School Board in Biden’s Hometown »
How Oakland Teachers Took Control of Our Return to School »
Jordanian Teachers Union Leaves Behind Legacy of Wins »
Pandemic Discrimination Against Asian Americans Has Long Roots »