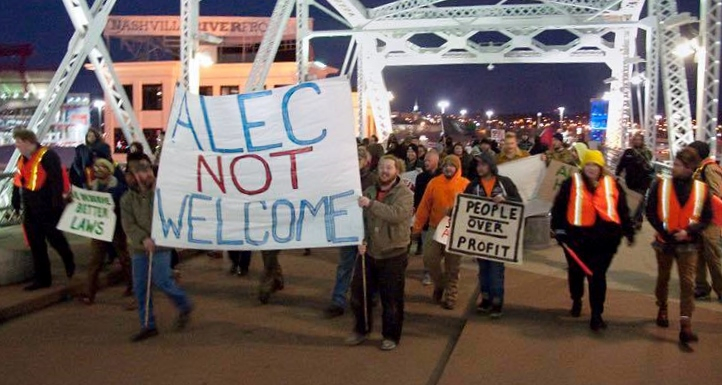 ALEC's visit to Nashville was an opportunity to educate, agitate, and mobilize rank-and-file union members together with an array of progressive organizations. SMART 177 stewards were front and center carrying the banner over the pedestrian bridge. Photo: Alvine.

A year ago, when local union leaders and activists gathered at our Central Labor Council of Nashville and Middle Tennessee strategic planning meeting, we learned that the right-wing policy group the American Legislative Exchange Council (ALEC) was hosting its big annual conference in our city in 2018.

So we saw the organization’s visit to Nashville as a unique opportunity for organized labor, one that often gets overlooked—an opportunity to educate, agitate, and mobilize rank-and-file union members in conjunction with an array of progressive organizations. We immediately set out to organize a demonstration at the conference, which took place December 6-8.

“Labor is a target for ALEC. They’re trying to dismantle public sector unions and workers’ rights,” said Vonda McDaniel, president of the Nashville Central Labor Council and a member of Steelworkers Local 1055L at the Bridgestone tire plant. “Just because ALEC comes to a right-to-work-for-less state, that doesn’t mean that you’re not going to run into angry union members!”

ALEC brings together Republican state legislators and representatives with several hundred of the world’s largest corporations. They meet several times per year to draft corporate-friendly model bills, which are then introduced in state legislatures across the country.

Since its inception in the mid-1970s, ALEC’s practices have remained largely secretive. Yet the group estimates that 200 of its laws are passed every year.

A large number of Tennessee legislators participate. In 2015, Bill Ketron, the Senate Republican Caucus chairman, bragged that the state’s delegation of legislators to ALEC’s national conference was the largest in the country.

To educate members about ALEC, the Central Labor Council encouraged local unions to share a short article by Gordon Lafer, author of The One Percent Solution: How Corporations Are Reshaping America One State at a Time, via social media, newsletters, and at membership meetings.

“We talked about it quite a bit at our hall, about how they have that cookie-cutter legislation that they pass around to bring working people down,” said Kim Sansom, who’s been a member of Electrical Workers (IBEW) Local 429 for 22 years. “I pay attention to things like women’s rights and LGBTQ rights, but I didn’t realize that it was all one group that writes bills on all these different issues.”

Sheet Metal Workers (SMART) Local 177 member activist Adrian Mizell spoke to a meeting of 80 apprentices about ALEC’s dangerous agenda. “I think it’s really important to teach people about activism while they’re young,” Mizell said. “If they get involved early on in their union career, they’re more likely stay involved in the future.”

Mizell’s efforts paid off—eight apprentices attended the rally. For most it was their first demonstration. “I think I had seen something about it on Facebook but didn’t think much about it until Adrian came and spoke to us,” said second-year SMART apprentice Patrick Goolsby.

Would he attend another action in the future? “Definitely! If we continue to fight for what’s right, we’ve got to win.”

Overall, the rally against ALEC on a frigid night drew about 150 people, including 28 members from eight unions. Despite the low temperature, energy was high. The crowd chanted non-stop as it circled the Omni Hotel, where ALEC members were arriving to attend an awards dinner. Although we had anticipated a higher turnout, a new, broad-based coalition has cemented to fight ALEC bills in the next legislative session.

“I’ve never been somewhere that had union people standing together with environmental people and Planned Parenthood people,” Sansom. “When we come together like that, it makes us all stronger.”

Anne Barnett is campaign and community coordinator with the Central Labor Council of Nashville and Middle Tennessee.

Related
Why the UAW Lost Again in Chattanooga »
Volkswagen Declares War against Works Council and German Union »
On Eve of Union Vote, Chattanooga VW Workers Describe Rampant Workplace Injuries »
Injured VW Worker: ‘This Is Why We Need a Union’ »
As VW Election Nears, CEO Stokes Fears over Plant Closing from 1988 »