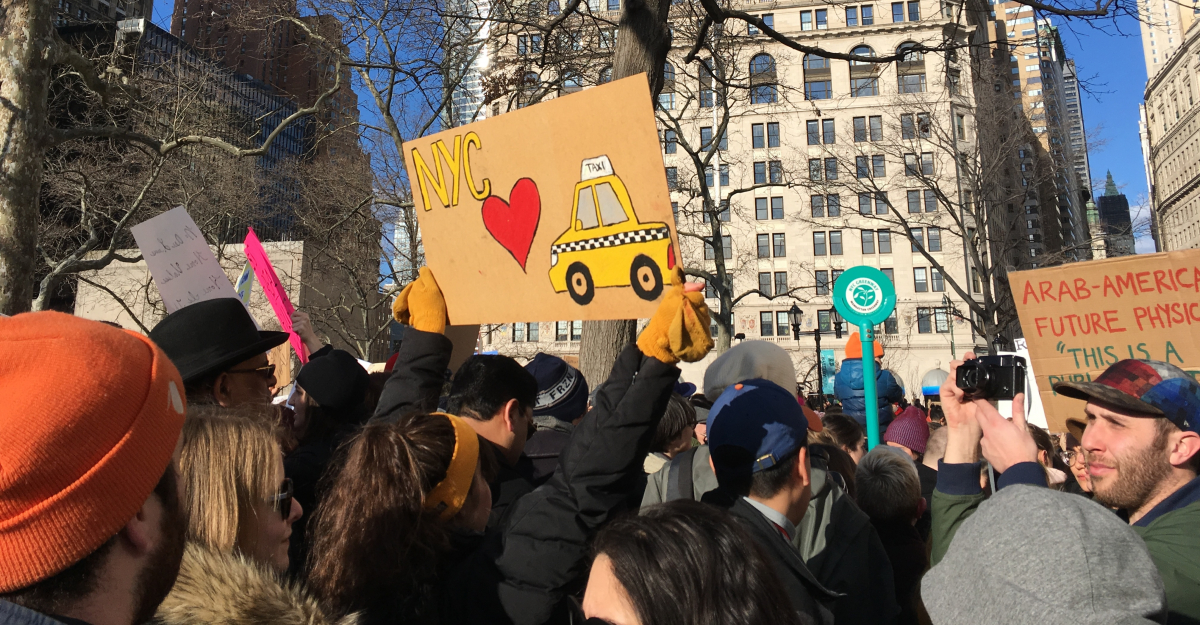 In solidarity with a massive protest that erupted at New York’s JFK Airport January 28, the city’s Taxi Workers Alliance organized a one-hour strike at the international terminal.

Hundreds of immigrants were detained that day by border agents upon arrival at international airports across the U.S., including dozens at JFK.

The New York Taxi Workers Alliance represents more than 19,000 drivers in the city. “Ninety-five percent of cab drivers are immigrants, from over 100 countries,” said co-founder Javaid Tariq. “Sixty to 70 percent of our members are Muslim.”

“Since President Trump signed the Executive Order, there was a bombing of a mosque in Texas, and we are worried that there is going to be more violence against drivers.”

The Taxi Workers organized quickly to get the word out to members in just a few hours.

“We sent a robo-call and email blast and sent messages to our members,” Tariq said. “Our members and organizing committee members went to the dispatch lot—where they dispatch cabs to the different terminals—and asked drivers to not go pick up passengers there for the duration of the strike.”

The work stoppage was a success. The airport’s taxi cab pickup line sat empty during the 6:00 hour.

No cabs in this line at JFK terminal 4. #NoBanNoWall #RefugeesWelcome pic.twitter.com/ZX5BycRTie

That night the app-based ride company Uber conspicuously announced over social media that its “surge pricing” pricing was no longer in effect at JFK, in essence lowering the cost of a ride from the airport during peak hours.

Surge pricing has been turned off at #JFK Airport. This may result in longer wait times. Please be patient.

Almost immediately #DeleteUber started trending on Twitter, as protestors around the country decried the company for encouraging drivers to cross a picket line. Though the announced strike had technically just ended, there were still no taxis around, and the protests were still growing.

Don't just #deleteUBER from your apps. Follow these steps pic.twitter.com/xbVkrMfJRb

By the next day, Uber was backpedaling. The company claimed it wasn’t attempting to break the taxi strike. Kalanick even issued a statement offering to provide three months' compensation to Uber drivers impacted by the ban.

But taxi workers aren’t buying what Uber is selling—and they don’t think you should be either. “Uber is a greedy company with very close ties to Donald Trump,” said Tariq. “Everyone should delete Uber and give their business to professional drivers.”

Looking to the future, Tariq believes that the overwhelming member participation and public support the strike attracted are clear signals that unions should escalate their actions against the administration.

“In the future, we might engage in similar strategies,” he said. “We need to keep working against these unfair executive orders.”

Chris Brooks is a staff writer and organizer with Labor Notes.chris@labornotes.org
Related
Here's What's in the New Bill Jointly Backed by Uber and the Teamsters in Washington State »
Viewpoint: Gig Workers Deserve Real Labour Rights, Not Backroom Deals Like This One Between Uber and UFCW Canada »
BREAKING: Draft Legislation in New York Would Put Gig Workers into Toothless 'Unions' »
It Took a Boatload of Uber Cash to Beat Self-Organized Drivers »
Workers and Unions Must Remain Vigilant to Prevent Trump from Delegitimizing the Election, and to Stop Trump’s Desired ‘Coup’ »