At the Birthplace of Auto Workers' Sit-Down Strikes, Locked Out for Eight Months and Counting 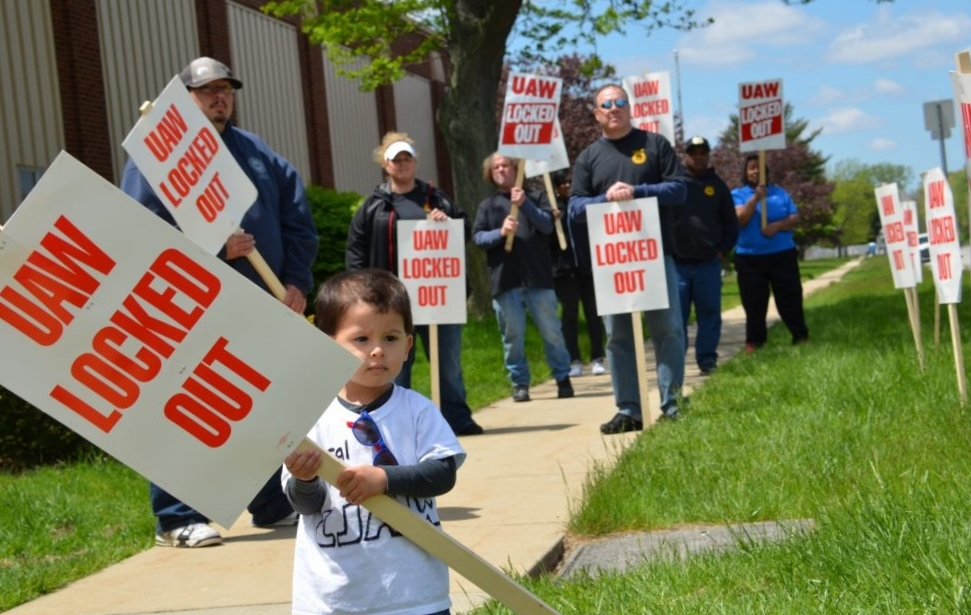 Last week auto workers from Chicago and Detroit made a pilgrimage to the birthplace of auto workers' sit-down strikes to lend solidarity to workers who’ve been locked out for eight months and counting.

Honeywell locked out 320 aerospace workers with Auto Workers (UAW) Local 9 in South Bend, Indiana, on May 9 after they voted 270-30 to reject the company’s offer. Another 40 Honeywell workers with Local 1508 at in Green Island, New York, are also locked out.

The company’s 2015 profit of $4.77 billion set a new record. Yet Honeywell claims it has to rein in costs because declining demand is producing “turbulence” for plane manufacturers.

Honeywell is a major defense contractor. The two plants produce wheel rims and braking systems for commercial and military aircraft, including the Boeing 737, the Boeing B-92, and Lockheed Martin F-35.

Indiana’s UAW Local 9 asked the Navy not to renew the company’s $18.3 million contract as long as the lockout went on. But the contract was renewed.

The average wage of Local 9 hourly workers is $21.83—while Honeywell CEO David Cote, one of the top-paid corporate executives in the country, makes $15,865 an hour.

After he retires in March he will receive an estimated $908,712 every month for the rest of his life.

Honeywell had prepared for a lockout carefully, hiring Strom Engineering to provide 150-200 scabs, who shadowed workers inside the plant in the lead-up to the contract vote.

For months the locked-out workers went without their unemployment benefits, because the state agency that handles unemployment—part of the administration of Indiana Governor Michael Pence, now vice president-elect of the United States—classified the case as “under review” and sent it to an administrative law judge. Eventually the workers got their benefits.

From May until September, negotiations ceased. When the company finally came back to the table, it offered to move on health care. The bargaining committee brought the new, still concessionary proposal to the membership without a recommendation on how to vote.

This time, as unemployment benefits ran out and the holidays approached, the company’s proposal passed in the smaller Green Island unit—but Local 9 voted it down by 70 percent.

Meanwhile another Honeywell facility, in Minneapolis, has a contract deadline of February 2. The corporation is using the same tactics to try to scare workers there into accepting a concessionary contract.

In several other Honeywell facilities, the membership is composed of Steelworkers and Teamsters.

Last summer the community of South Bend—particularly members of UAW Local 5, who make Mercedes there—turned out for rallies and pickets.

Members of UAW Local 551, who work 80 miles away at the Ford plant in Chicago, have made trips to the picket lines and raised funds. For Christmas they raised $7,500 for Local 9 members.

A dozen autoworkers and retirees from Detroit and Chicago, members of the Autoworker Caravan group, drove through the snow on January 5 to be at Local 9’s split-shift union meetings and talk to officers and members. We brought a check for $525.

Locked-out workers told us what it’s like to survive on just the $200 a week they get in benefits from the union (plus basic health care). Some have found work in other plants and industries.

Local 9’s recording secretary told us that when he had toured the plant with safety inspectors just a few days before, it seemed there were only about half as many scabs as pre-lockout workers. Parts-making has apparently been outsourced; the scabs merely assemble.

Some workers told me the plant was old and they thought Honeywell might want to shut it down. On the other hand, the facility is profitable enough that over the last five years, the corporation has invested $27 million there.

WHERE THE SIT-DOWNS BEGAN

The Honeywell plant in South Bend was originally a Bendix plant. A thousand workers sat down there in November 1936, making it the first U.S. auto plant to employ the sit-down tactic. Their eight-day occupation eliminated a company union and won UAW representation.

Following their model, workers at Kelsey Hayes Wheel Company on Detroit’s west side organized a series of sit-downs, which ended with an agreement for higher wages (but not union recognition) just before Christmas that year.

And by the end of December, autoworkers occupied General Motors plants in Flint, Michigan. Their historic sit-down ended on February 11, 1937, with UAW recognition and a commitment from the company to negotiate a national agreement.

Over the years the UAW International has asked its members to honor that victory by wearing white shirts to work on that date. This symbolizes that “blue-collar” workers, just like “white-collar” workers, are individuals who deserve management’s respect.

Autoworker Caravan members have pledged to go back to South Bend on February 11. We hope that event can be both a celebration of the 80th anniversary of the Flint victory and a support rally for the locked-out workers.

Dianne Feeley is a retired auto worker in Detroit’s UAW Local 22. Donations and solidarity messages can be sent to UAW Local 9, 740 Michigan St., South Bend, IN 46601.

CORRECTIONS: This article has been updated to correct the number of locked-out workers in South Bend (320, not 340) and title of the union officer who toured the plant, recording secretary, and to clarify that the Bendix sit-down was the first in a U.S. auto plant, not in any U.S. plant. We regret the errors.