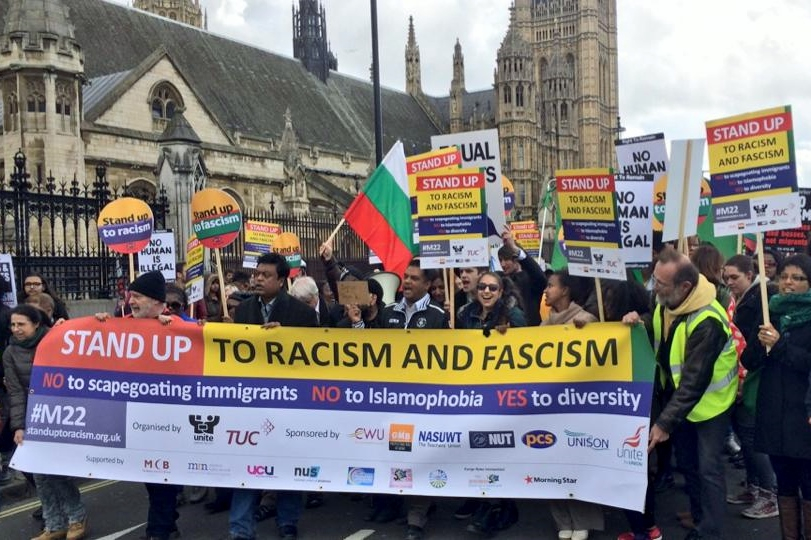 Union members in London marched against racism in 2014. The "Brexit" referendum has escalated anti-immigrant sentiment and aggression. Most unions urged members to vote to remain in the EU, to protect workers’ rights. Photo: Unite.

On June 23, Britons voted by 52 to 48 percent to leave the European Union.

For decades Britain has dithered on the edge of the EU, like a swimmer getting up the nerve to plunge in. When Prime Minister David Cameron announced a referendum on EU membership, many on the political scene found it a puzzling decision at best.

Now that the voters have decided on “Brexit” (Britain + exit), many have condemned the move as a disaster. And no wonder.

The day after the vote, Britain’s currency, the pound, dropped to the lowest exchange rate with the dollar since 1985. Stock markets also slumped, with some of the country’s leading banks losing 30 percent of their value.

Prime Minister Cameron resigned, throwing his Conservative Party into a leadership crisis. The Labour Party, which also favored staying in the EU, created its own crisis. Its more neoliberal Members of Parliament moved to unseat left-wing party leader Jeremy Corbyn, who had been elected by two-thirds of the membership—with the backing of most union leaders—only nine months earlier.

Sharp political divisions in British society, having little to do with previous party loyalties, now emerged. The issue of Scottish independence was raised again, as Scots voted by 62 percent to stay in the EU.

The details of the vote have revealed a chasm of political differences between the educated elite, based mainly in London, and the much more deprived areas of the Midlands and the North of England.

In those areas, mainly white working-class voters chose “Brexit” as a revolt against those political elites, including many Labour Party politicians, who had ignored their plight for decades.

Many of these working-class people have seen their jobs lost and their communities devastated as industry left, real wages fell, and governments of both parties introduced austerity. “Brexit,” it seems, was their revenge.

But the immediate target for many was not so much the austerity policies or the politicians who implemented them as it was the immigrants who these voters believed were taking their jobs and crowding schools and the National Health Service.

Interviews on TV and in the press showed mostly white working-class men and women naming immigration as their reason for voting to the leave the EU, which requires freedom of movement for workers.

The divide also showed up in exit polls, in which 65 percent of “leave” voters thought immigration “bad” for the country, compared to 62 percent of “remain” voters who saw immigration as “good.” Polls taken a few days before the vote showed that 53 percent of those classified as working-class thought immigration was “bad,” while only 34 percent of middle- and upper-class people said this. In the aftermath of the vote, reported incidents of abuse toward people thought to be immigrants increased significantly.

This is not to say that all working-class, or even all white working-class, people voted to leave—or that those who did formed a majority of “Brexit” votes. Another poll showed that only about 40 percent of leave voters could be classified as working-class.

Many young workers voted to stay in the EU. Some large cities with big working-class populations, such as Liverpool and Manchester, voted to remain. So did majorities in Scotland and Northern Ireland. One of the ironies was that the “Brexit” vote was often highest in areas where there were few, if any, European immigrants.

Anti-immigrant sentiment is not new—and is certainly not limited to migrants from the European Union. In fact, non-EU immigrants outnumber Europeans.

The ultra-right, anti-immigrant United Kingdom Independence Party (UKIP, pronounced U-kip) has been making gains among working-class voters for some time by blaming Britain’s economic and social problems on immigration, regardless of its origins. For years the daily tabloid press, too, has been blaming immigrants for almost every setback faced by Britain’s beleaguered workers.

It was UKIP, along with many “Euro-skeptic” Conservative politicians, that set in motion the demand for a referendum on the EU in the first place. The referendum itself, however, has escalated anti-immigrant sentiment and aggression.

What of the Unions?

Most unions urged members to vote to remain in the EU in order to protect workers’ rights like limits on working time to 48 hours a week, equal treatment of full-time, part-time, and agency workers, paid vacation days, and paid maternity and paternity leave, all currently guaranteed by EU directives or laws.

A letter from the leaders of 10 of Britain’s largest unions warned, “If Britain leaves the EU, we are in no doubt these protections would be under great threat. After much debate and deliberation we believe that the social and cultural benefits of remaining in the EU far outweigh any advantages of leaving.” The threat was that the Conservative government would move to eliminate these and other labor rights once EU standards no longer applied.

To what extent these union leaders actually campaigned among their members for a “remain” vote is not clear, and the unions did not appear central to the national debate.

The debate in the labor movement, however, was not a simple one. Three unions usually associated with the political left supported “Brexit”: two railroad workers’ unions and the bakers.

The joint statement from these unions argued, “The EU is anti-worker and cannot be reformed. We support a Leave vote in the forthcoming referendum because we believe the EU acts overwhelmingly in the interests of big business and against the interests of workers.” At the same time, referring to the mounting immigrant crisis on the borders of the EU, they opposed the idea of “fortress Europe,” stating, “We profoundly regret that children and families fleeing poverty, persecution and war are not being allowed in to Europe.”

Unfortunately, such sentiments missed the real terms of debate and were drowned in the flood of anti-immigrant reaction. In the wake of the leave vote, Dave Prentice of UNISON, the public employees’ union, bemoaned that “the campaign has been typified by hatred, vitriol and misinformation.”

The day after the vote, a statement by 12 union leaders, including two of those who favored “Brexit,” pointed to the political crisis and the danger of “a more right-wing Tory (Conservative) government.” Turning their hopes to the Labour Party, they argued, “In the absence of a government that puts the people first Labour must unite as a source of national stability and unity… The last thing Labour needs is a manufactured leadership row.”

Their appeal to stop the internal fight in the Labour Party, however, fell on deaf ears, as a majority of Labour Members of Parliament moved to dump party leader Corbyn. These MPs used the leave vote as an excuse to do what they had planned from the start—to remove Corbyn as party leader—saying that he hadn’t fought hard enough for a remain vote. That this was a bogus excuse can be seen in the fact that only 19 percent of leave voters identified as Labour voters, according to a poll. The vast majority were Conservatives and UKIP members. This leadership fight is likely to go on for some time.

The Brexit vote has encouraged the already-advancing far-right nationalist and neo-fascist anti-immigrant parties of continental Europe. Like Britain’s UKIP, these parties have been attracting angry working-class voters on an anti-immigrant basis. Major far-right parties in France, Italy, and the Netherlands are calling for similar referendums.

With events moving rapidly, and divisions coming to light within Britain—and, indeed, within the working class—it is difficult to see where things are headed. It seems clear, however, that unless unions rally their members to action against the gutting of worker rights that’s already at the core of the Conservative government’s agenda, and in defense of immigrants’ rights as well, the immediate future is bleak.

Anti-immigrant feelings stirred up among deprived working-class people by the massive blunder of the referendum can be countered by the kind of working-class unity found in big industrial cities like Manchester, Liverpool, Leicester, and Glasgow, which voted strongly to stay in Europe.

Sheila Cohen and Kim Moody are members of the National Union of Journalists in the U.K.