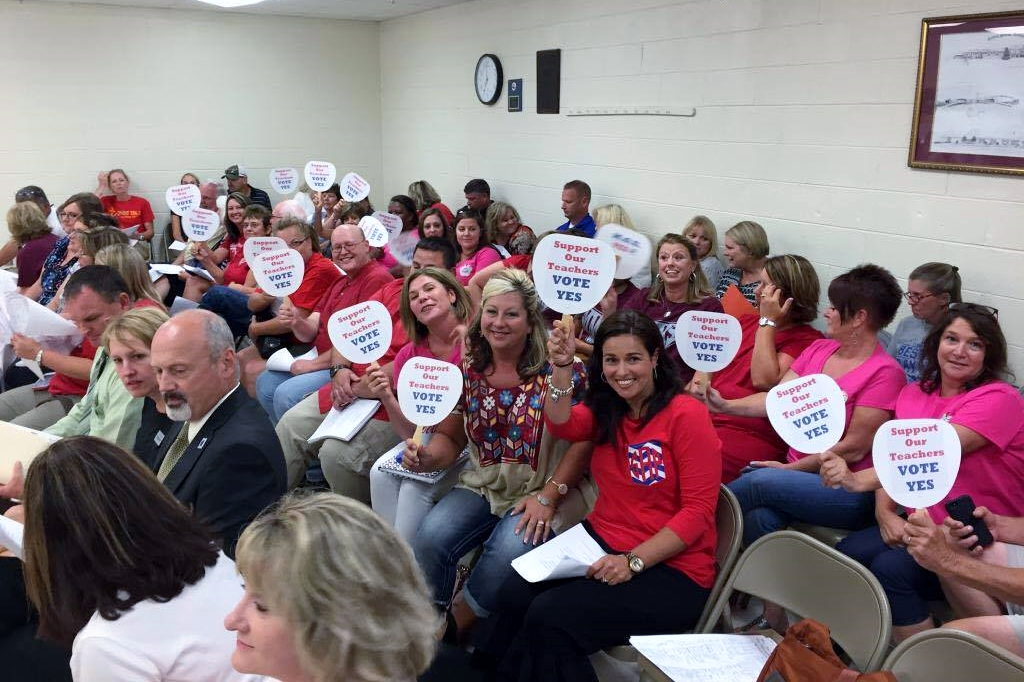 In Tennessee, the teachers union isn't obliged to represent non-members. But activists are discovering that the best way build solidarity and union strength is still to be there for everyone—regardless of membership. Photo: Chris Brooks.

With more than half the states in the U.S. now open shop, anti-union forces are aiming at their next target: exclusive representation.

Take my home state of Tennessee, where until recently I was an organizer for the teachers union. A 2011 law bars the union from being the exclusive representative of school employees.

That means, while non-members still benefit from union contracts, the union has no obligation to represent them on the job. It also means that, besides fighting the boss, the union has to fight a rival—an employer-friendly “yellow union” headed by a privatization advocate.

The yellow union offers liability insurance and professional development at a fraction of the cost of union dues. Its staff has lobbied to repeal collective bargaining rights and ban voluntary dues deduction.

During joint negotiations under the state’s unique multi-party bargaining process, I saw firsthand how the yellow union would advise teachers against fighting for even such basic rights as just cause.

Frustrated union leaders and activists would often remark that losing exclusivity was a good thing. They were tired of representing “freeloaders” anyway. Why should people get the milk without paying for the cow?

But that only makes sense if you see the union as a provider of services, rather than as a way to take action on issues members care about. Open-shop laws and attacks on exclusive representation are both meant to divide us so we can’t fight the boss.

It’s an easy trap to fall into: writing your co-workers off, instead of working to win them over. But teacher activists in rural Monroe County, Tennessee, have found a better way. The union builds solidarity by being there for everyone—regardless of membership.

When the district quietly tried to change the pay scale so that teachers’ lifetime earnings would be diminished, the union organized educational meetings in every school and had teachers bring their paychecks in. After teachers rallied at the next school board meeting, the district backed down.

“When you have people who have been done wrong, even if they aren’t a member, we do the right thing,” said activist Sarah Amos. “It’s in our blood.”

Recently the union has made impressive membership gains during a fierce contract campaign. The district director offered an ultimatum: either take concessions on the grievance process, such as removing arbitration, or he would ensure the district would never ratify a contract.

Union activists responded by organizing with all teachers, not just members. Reps talked with teachers one on one. They held small meetings at every school. They asked every teacher to sign a support petition. And they worked to mobilize everyone to school board meetings.

The contract remains un-ratified, so the union’s next move is campaigning to elect pro-teacher school board reps.

Activists are banking that teachers will eventually become members if they first get involved by fighting on meaningful issues. And it’s working. The school where the director was formerly principal has rocketed from just a few union members to nearly 100 percent.

Amos never gives up on her co-workers. “There is one teacher who has been teaching since I was 12 years old,” she said, “and she just became a member this year.”

In fact, this longtime non-member has become a building rep and union activist. “Someone who for 24 years wouldn’t even think about joining is now red hot and one of our most active members,” Amos said.

How’d that happen? “Sometimes people think that union members are lazy and that we need a contract to protect us,” Amos explained. “But then she saw us fight, and recognized that lazy people don’t fight this hard.

Chris Brooks is a staff writer and organizer with Labor Notes.chris@labornotes.org
Related
Minneapolis Strikers Demand a Living Wage for the Lowest-Paid Educators »
Richmond Educators Are First In Virginia to Win Bargaining Rights »
Twin Cities Teachers and School Employees Gear Up for Strike »
As Omicron Rages, Teachers and Students Fight for Safety Measures in Chicago and Elsewhere »
Teachers Strike against a ‘Heartless’ School Board in Biden’s Hometown »