Fight for What We Deserve, Not Just What We Think We Can Win 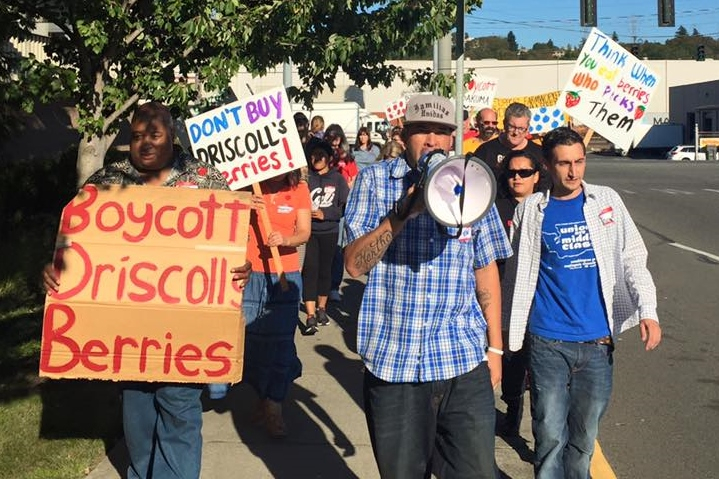 Unions that are willing to aim high might win something worth having. Puget Sound Troublemakers School attendees September 12 joined a rousing picket at Costco, pushing the store to honor the boycott of Driscoll's berries. Farmworkers are fighting for $15 an hour. Photo: Edgar Franks.

It’s hard to top the timing of Labor Notes’ Seattle Troublemakers School. More than 200 activists gathered September 12 just as a citywide teachers’ strike was heading into its second week. The backdrop was fitting, in a town that was ground zero for global justice during the 1999 WTO protests and home of the first concrete victories in the “Fight for $15.”

Listening to the strikers talk about their demands, which included tackling racial disparities in student discipline and spending time on classroom instruction instead of standardized tests, I was struck by how much their fight was about raising expectations—for their own members, for parents, and for the public.

Following their counterparts in Chicago, St. Paul, Portland, and Los Angeles, Seattle educators spelled out a vision of the schools their students deserve, and were willing to go to the mat for it.

It’s these high-profile fights over what we deserve, not just what we think we can win, that are key to changing common sense around what’s possible.

The same is true for Seattle’s breakthrough $15 minimum wage. As someone who spent more than a decade working with living wage campaigns around the country before coming to Labor Notes, I find the success of the “Fight for $15” staggering.

It took years before living wage ordinances routinely surpassed $10 an hour, and activists regularly tied themselves in knots debating a 25- or 50-cent increase in their living wage proposal, worried whether such a jump would make or break the campaign.

But in three short years—thanks to hundreds of strikes by thousands of low-wage, mostly fast food workers—$15 an hour has become the new normal when people argue about the minimum wage, more than twice the federal $7.25.

When politicians like New York Governor Andrew Cuomo—who’s made a career out of attacking union workers—start jumping on the bandwagon, you know we’re winning.

In mid-September Cuomo approved a $15 minimum wage for the state’s fast food workers, phased in over three years in New York City and six years in the rest of the state. He announced plans to raise the state minimum to $15 for the rest of the workforce, too.

We know politicians will lean any way the wind blows.

The 2008 Republic Windows and Doors factory occupation, also in Chicago, drew inspiration and tactical advice from similar plant takeovers in Canada. And although it didn’t start a prairie fire, the occupation’s impact showed up in some inspiring and unlikely places.

My favorite example came a few weeks after the sit-down strikers won the 60 days’ wages guaranteed them under the WARN Act that governs plant closings.

A friend called me after meeting with a dozen childcare workers whose fly-by-night employer had closed its doors and stiffed them on their last two paychecks. Inspired by the factory occupation, the workers spent the evening at a McDonald’s making signs demanding WARN pay, even though, since they were classified as state workers, they weren’t legally entitled to it.

Those same childcare workers, along with everyone from Washington state’s berry pickers to UPS part-timers, have now taken up the banner of $15.

Unions that are willing to aim high might win something worth having.