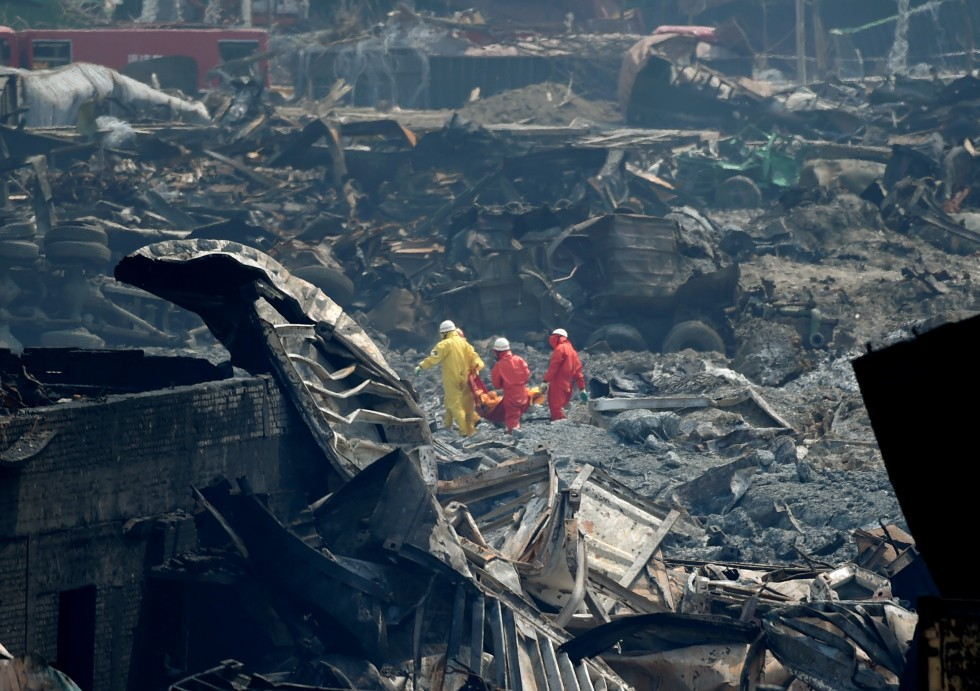 A series of chemical explosions on August 12 at a warehouse in Tianjin is shining a spotlight on dangerous workplace conditions and precarious employment relations in China. Photo: Xinhua.

A series of chemical explosions on August 12 at a warehouse in the northern city of Tianjin is shining a spotlight on dangerous workplace conditions and precarious employment relations in China.

The accident began with fires at a warehouse owned by Rui Hai International Logistics. The company was storing illegal quantities of sodium cyanide—a highly toxic and volatile substance. Investigators at the site have also found hundreds of tons of fertilizers and other hazardous chemicals.

Firefighters reportedly sprayed water on the flames, which may have contributed to a chain reaction. Two gigantic explosions were large enough to register as minor earthquakes. Fires and secondary explosions raged on for days, creating serious concerns about air and water contamination.

The accident has already claimed 145 lives and injured more than 700. Some are still missing. The casualties include employees of the logistics firm, other workers near the blasts, firefighters, and local residents. Apartments miles from the industrial park suffered broken windows, while poorly constructed dormitories nearby simply collapsed, injuring rural migrant workers inside.

What began as an industrial accident has quickly become an environmental disaster. The week after the blasts, when the first rains came, residents reported a white foam covering the streets and a stinging sensation on their skin. Thousands of dead fish floated to the surface of the nearby Hai River.

For fear of contamination, authorities evacuated residents near the blast site. Military units and biochemical specialists were sent to clean up the area.

Hundreds of displaced residents took to the streets to call for compensation. The families of dead and missing firefighters demonstrated to demand more information and transparency.

This is one of China’s worst industrial accidents in recent years, but it’s by no means isolated. Three decades of breakneck industrialization have produced a long trail of disasters.

The government does not publish statistics on industrial accidents. But the Hong Kong-based China Labour Bulletin’s Work Accident Map has recorded some 370 industrial accidents since December 2014. The majority are in construction, mining, and manufacturing. Most include fatalities as well as injuries.

Such incidents rarely receive the public and media attention that the Tianjin blasts have gotten. Few are thoroughly investigated, and it’s rare that workers or their families are fairly compensated.

Until recently, mining accidents were the most notorious source of workplace injury and death. Six to seven thousand miners died each year in the early 2000s, in accidents caused by dust explosions, mine collapses, and floods. After a 2005 disaster, authorities cracked down on illegal and unsafe mines, and the death toll declined. Even so, in 2013, 1,000 Chinese miners died on the job.

Many more suffer from lung diseases. Six million workers have pneumoconiosis, and in the majority of cases it’s probably caused by dust inhalation in coal mining. They face huge costs for medical treatment, with little compensation from management and the government.

Factory fires and explosions are common too, particularly in manufacturing, where management and local authorities routinely ignore safety. A 2013 fire at a poultry plant in Jilin Province killed 121 people. Last year, a dust explosion at an auto parts plant in Kunshan, Jiangsu Province, killed 146. The China Labour Bulletin reported 26 workplace explosions this year before Tianjin, causing 65 deaths and 119 injuries.

Most of these companies lack effective union representation, so workers have no way to report and address problems.

China is the world center of wildcat strikes—given that no strike in China is officially allowed under the law. The government doesn’t issue statistics, but one source found 1,171 strikes and worker protests from June 2011 through 2013.

Strikes are on the rise since 2008, but they all take place outside the official channels of the All-China Federation of Trade Unions. China labor scholar Eli Friedman, who speaks Mandarin and has spent a great deal of time in the country, shows us throughout his book Insurgency Trap how the ACFTU takes a “passive repressive” response to worker unrest—and sometimes not so passive.

His case studies show how in even the supposed best examples—the ones that ACFTU officials show to visiting foreign unionists—workers find their union worthless and contracts go unenforced.

Eighty-eight firefighters were killed in the Tianjin blast. Even as the government hails them as national heroes, the casualties have called attention to their precarious employment conditions.

Many firefighters in China are employed on “dispatch labor contracts.” In theory this means they’re asked to sign a one- to two-year contract with a labor contractor, then dispatched to work for companies. In practice, companies often recruit workers directly, then force them to sign dispatch contracts afterwards.

This setup allows employers them to avoid establishing any legal contractual relationship with their employees. Workers on dispatch contracts receive lower salaries and fewer benefits than those on regular contracts. When accidents like this happen, they often receive much less compensation—and it’s not always clear who’s even responsible for paying it.

This particular form of casualization has expanded since the Chinese government passed the 2008 Labor Contract Law, supposedly designed to protect workers’ job security. To bypass the law, employers started using more dispatch labor. The central government, responding to public criticism, amended the law in 2014 to reduce casualization—but there’s no evidence the amended law has been forcefully implemented.

Most of the Tianjin firefighters who died were on such contracts. So were many of the workers in the warehouse that exploded.

There is no union specifically for firefighters in China. The district trade union that’s supposed to represent those in Tianjin responded to the disaster by passing out a self-help handbook.

The public backlash has forced the Chinese government to launch a nationwide investigation into businesses that produce and store hazardous materials. Linking the disaster to corruption and a failure of regulatory oversight, the government is also investigating the company and local authorities. Already it has detained 11 high-level local officials and 12 senior company managers, and the chief of the State Administration of Work Safety has been sacked on suspicion of “serious breaches of discipline and the law.”

The government’s actions are a tacit acknowledgment of public concern for the environment, and of China’s emerging environmental movement. Over the past decade, urban residents in Xiamen, Dalian, Maoming, Kunming, Shifang, and most recently Shanghai have protested petrochemical and incineration plants that were slated to be built near concentrated residential areas. Usually they’ve won, getting the plants relocated or cancelled.

Although they come at tragic human costs, the new investigations and stepped-up regulatory enforcement are steps in the right direction. But ultimately, to fight for better health and safety standards and to avoid any more tragedies, workers will need to build strong, democratic unions.

China’s official union, the All-China Federation of Trade Unions (ACFTU), has sought to set up unions at more and more companies. But even in most of these unions, workers cannot democratically elect their representatives. Recent experience suggests the most effective unions are those elected by workers after successful strikes.