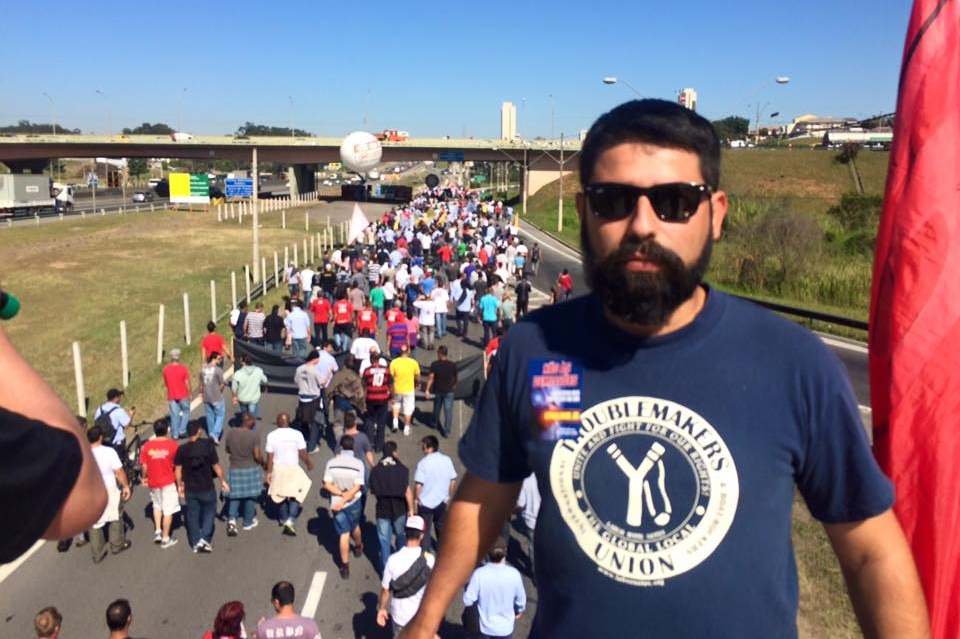 Four thousand workers at a GM plant in Brazil started an indefinite strike August 10, after the corporation announced hundreds of layoffs. Photo courtesy of Herbert Claros.

UPDATE, August 25: Workers at the General Motors plant in São José dos Campos, Brazil, ended their 12-day strike August 24 when they voted up an agreement that converts the 798 permanent layoffs into temporary ones with pay. If there are layoffs when they return, they will get four months' pay as severance. GM will pay half the wages for the strike period. The union vows to continue to push for national legislation to boost job security by reducing the work week to 36 hours and nationalizing companies that lay off workers.

Four thousand workers at a General Motors plant in Brazil started an indefinite strike August 10, after the corporation announced hundreds of layoffs. It’s the latest volley in an ongoing battle to preserve jobs in Brazil’s auto industry, especially its most militant plants.

Workers at the same plant struck for six days in March—and turned 800 permanent layoffs into 650 temporary layoffs with pay:

By the end, the strike was creating parts shortages at the plants of São Caetano do Sul and Gravataí—threatening production there too.

Workers launched the strike after GM said it would lay off 800 workers immediately and make the layoff permanent in two months. Already since 2012 the plant has lost 2,000 workers, out of its former workforce of 7,500.

With auto sales declining and production down, in the past 12 months Brazil has lost almost 13,000 auto jobs. Volkswagen and Mercedes Benz workers too have struck this year against permanent job reductions….

The settlement provides that there will be no retaliation against the strikers. Some provisions would surprise U.S. workers: full pay for days on strike, no deduction from profit-sharing, and full pay for workers throughout their temporary layoff.

In 2012, after GM announced 1,840 layoffs, workers from the São José dos Campos plant occupied one of Brazil’s most important highways, blockading the road with burning tires and shutting down traffic for over an hour. Their action brought enough pressure on the company and the Brazilian government that those permanent layoffs were rescinded, and GM decided to convert the strike day into a paid leave.

The Metalworkers Trade Union of São José dos Campos is affiliated with the Popular and Workers Center (CSP-Conlutas), which is independent of the country’s ruling Workers Party.

The workers are appealing for messages of solidarity from unions around the globe. Below is a model:

Solidarity with the GM autoworkers Strike in Brazil

We express solidarity with the strike of the metalworkers of General Motors in São José dos Campos which started this Monday, August 10th, against the layoff announced by the company last Saturday, August 8th.

On the eve of Father’s Day, GM laid off, cowardly, via wire, hundreds of workers.

Once again, the automaker has acted with no flexibility whatsoever to carry out the layoff without seeking the dialogue with the Union, who is willing to find alternatives to the job cuts.

The job cuts takes place one month after the automaker lays off 500 workers at São Caetano do Sul plant and at the time when a local metalworkers group returns to the São José dos Campos factory after five months of a temporary layoff (temporary suspension of the employment contract).

Brazilian workers have already been harshly penalized by the rise in inflation, taxes, by the withdrawal of work rights and by the layoffs in several sectors. The current layoffs will worsen even more this scenario.

The automaker ranks second in the ranking of sales in Brazil and recorded profits of over a million dollars in the second half of this year. This profit is 302% higher than the same period of last year.

In addition, automakers like GM have received over recent years more than R$ 11 billion in exemption of the IPI (Tax on Industrialized Products) and are still being benefited by the payroll tax exemption. Rather than guaranteeing the jobs, automakers sent R$ 27 billion in profits abroad while dismissed 7,600 workers this year.

In view of the billions of Reais (R$) granted in tax breaks, it is imperative that federal, state and municipal governments make intercession in favor of the dismissals cancellation.

We demand that President Dilma issues a provisional measure establishing the employment stability as well as the reduction of daily working hours without wage reduction.

Send this motion to: