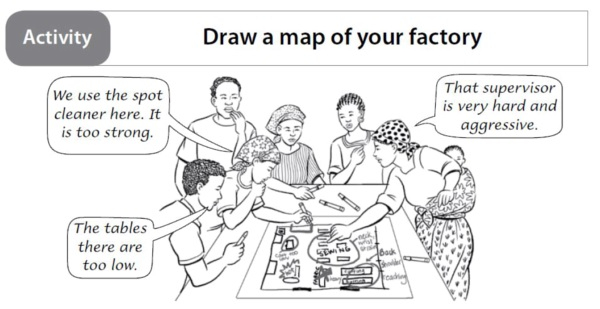 For plenty of workers, health and safety is about as boring a subject as there is. They don’t want to hear about this “crap,” many will say—they just want to get the job done.

Yet health and safety issues are as important as it gets, and a new book argues that organizers can use them to build power on the shop floor to “encourage” bosses to do the right thing.

“The most important product of any factory,” the authors argue, “is the health and safety of its workers.” Production schedules and profits should come second.

The comprehensive Workers’ Guide to Health and Safety, published in May, is based on 10 years of work. It’s been field-tested by workers in a number of countries. This book shows how to advance workplace health and safety from a worker-centered, pro-union, organizing perspective.

Designed for Shop Floor Use

The Workers’ Guide is intended for workers on the shop floor, both union and non-union. It’s primarily oriented to those producing for world-market factories, particularly in developing countries.

The writing is simple and clear, with good illustrations. The images are mainly from East and South Asia. Even the cover is enticing. The book’s stories are drawn from the lives of individual workers such as “Juanita,” a sewing machine operator who suffered from repetitive stress, and from collective struggles such as that of electronics workers in the Philippines who have fought for 20 years to build the NXP Workers’ Union.

The only limitation is that it’s just in English—although the publisher, Hesperian, is trying to raise money to translate it into other languages. (More below.)

While the Workers’ Guide focuses on shop floor conditions, it also puts those issues in a broader perspective, noting “to solve workplace problems, we must address the social, political and economic issues that cause them.”

A graphic below this statement shows a woman backed up against a wall with “poverty,” “disability,” and “unemployment” written on it. She’s surrounded by feral dogs: “long hours, low pay,” “no other job,” “work dangers,” and “no education.”

As I said, the book is presented from an organizing perspective. “A single worker cannot change the most important problems harming the health of factory workers,” the authors observe, “such as what chemical to use as a cleaner, whether to enclose a dangerous machine, or how to make sure that no worker or group of workers is always stuck with a particularly dangerous, dirty, or boring job.”

Solving any of those problems takes organizing together to pressure the boss.

A look at the Table of Contents gives a sense of the book’s wide scope:

Part 1, “Organizing for Safe and Fair Workplaces,” starts by putting production in a global context. It argues that health and safety issues need to be solved at work. It then walks through the steps of identifying an organizing issue, getting your co-workers involved, and planning escalating tactics to make the boss address it.

Part 4, “Social Dangers and Solutions,” includes chapters on working too much, too fast, for too little; doing factory work at home; discrimination; violence; workers who migrate; children who work; access to health care; reproductive and sexual health; stress and mental health; eating well for health; access to safe water and toilets; Human Immunodeficiency Virus (HIV); tuberculosis (TB); a decent place to live; and pollution from factories.

All this is followed by two appendices, “Laws and the struggle for decent, healthy and safe work” and “Common chemicals and materials,” and a reference section.

You don’t have to have much experience in factories to recognize that these topics aren’t only important for workers overseas. Many chapters should be of immediate interest to factory workers in the U.S. and Canada.

In fact, parts could be helpful for North Americans who work in services, too. And the book should be of interest to everyone who educates workers, no matter where you live.

A number of chapters are available online. Check it out, and see if you think your co-workers might find it of use.

Support Workers around the Globe

Hesperian is selling the Workers’ Guide for $25 apiece, which is a good price for a book of 564 pages. I have no hesitation in recommending it (and no, I’m not getting a cut).

Importantly, the publisher has also established two “solidarity funds” to support translating the book into languages other than English, and to subsidize distributing it to workers in developing countries around the world. (If you work in a developing country, contact Hesperian to see if you can get a copy sent to you.)

What I’d like to ask is this: that workers in EVERY workplace buy at least one copy, and then once you get it and show it around, that you ask co-workers to donate. It’s a concrete way to support global labor solidarity.

Having just returned from visiting workers of the Kilusang Mayo Uno (May First Movement) Labor Center of the Philippines in April and May, I know the issues in this book are so very salient. The day before I left, 72 workers were burned to death in a factory making slippers in Manila. I hope workers around the world will join the efforts to make work safe for everyone.

Kim Scipes is the author of KMU: Building Genuine Trade Unions in the Philippines, 1980-1994 and “Building Global Labor Solidarity Today: Learning from the KMU of the Philippines” (online) and former chair of the Chicago chapter of the National Writers Union, UAW #1981. His new book on “Building Global Labor Solidarity” will be out in the spring. He can be contacted through his website.