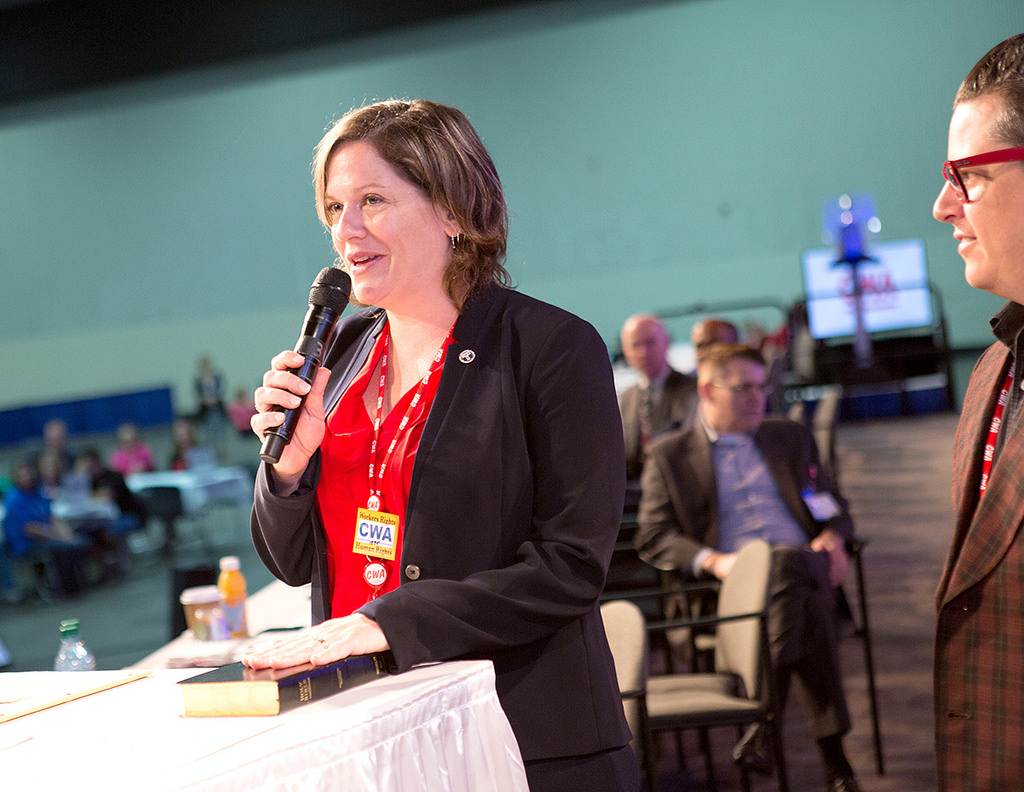 New CWA Secretary-Treasurer Sara Steffens was sworn in at the convention. Photo: CWA

Over four often-contentious days in Detroit in June, delegates to the national convention of the Communications Workers (CWA) chose new leadership, upheld the rights of strikers, and grappled with racism and police brutality.

But the union’s number two position was contested. Incumbent Secretary-Treasurer Annie Hill lost by a wide margin to Sara Steffens.

Steffens, who ran on a joint ticket with Shelton, has a strong union-building background. She got fired from the Bay-area Contra Costa Times while leading a successful 2008 organizing drive.

Now an official of CWA’s Newspaper Guild sector, which represents media workers, she has become known for her efforts to reach out to young aspiring journalists and freelancers.

The leadership changes come as CWA faces major challenges. Its telecommunications sector is about to enter bargaining for a new contract with Verizon, to replace the one reached after a two-week strike in 2011. State workers in New Jersey are trying to make Governor Chris Christie live up to his promises to fully fund their pension system.

On the bright side, over the last couple years the union has built up its strike fund and won a major organizing victory at American Airlines.

Shelton remains something of an enigma. His inaugural speech stressed many of the progressive themes CWA leaders have embraced in recent years: new organizing, member mobilization, and resistance to givebacks.

He denounced the corporate elite’s accelerating offensive against workers, and pointed proudly to CWA’s history of militant strikes in the telephone sector. He emphasized skepticism toward labor’s often faithless “allies” in the Democratic Party, and embraced union efforts to organize independent electoral vehicles like the Working Families Party.

However, Shelton has been associated with District 1’s top-down, old guard leaders, who opposed reformers’ efforts to revitalize New York City’s Local 1101. His nomination and election had something of the feel of a coronation.

And while he trumpeted CWA’s opposition to the Trans-Pacific Partnership, he put little or no emphasis on single-payer health care or Social Security expansion—which could go a long way toward easing the intense employer pressures on pension and health benefits in telecommunications, the newspaper industry, and the public sector.

For example, Newspaper Guild’s Local 31003 fought a yearlong battle in 2011-2012 against the New York Times’ demand to terminate its pension plan and replace it with an enhanced 401(k).

Before losing her reelection contest, Secretary-Treasurer Hill was put on the spot.

President Don Trementozzi of New England’s Local 1400 rose to challenge the report of her Credentials Committee, which establishes how many votes each local gets at the convention. The report had reduced his local’s voting strength because many members had been unable to pay dues during last winter’s four-month strike at FairPoint.

Delegates chanted, “Let them vote!” Hill offered only a halfhearted defense. The convention voted by a wide margin to give Local 1400 its full per-capita strength.

Later, delegates voted up a permanent change in CWA rules to provide that striking locals will not see their voting rights reduced.

Perhaps the most controversy arose over a Black Lives Matter resolution offered by CWA Local 6355, which represents Missouri public workers.

Members of that local were active in last summer’s protests in Ferguson after Mike Brown, an unarmed black teenager, was shot and killed by police. The resolution was submitted to put CWA on record against police brutality.

Local President Bradley Harmon, speaking for the resolution, said that intervention by CWA and other labor groups in the Ferguson protests helped build bridges to the community that in turn helped to defeat right-to-work legislation in Missouri’s legislature.

Delegates from the Newspaper Guild’s Denver local offered a motion to strike the “all lives” language throughout, but the amendment was defeated in a floor vote, and the committee’s version passed.

Donna Cartwright is a retired member of CWA Local 31003 and a longtime Labor Notes supporter.