Review: Can Labor Save Itself? 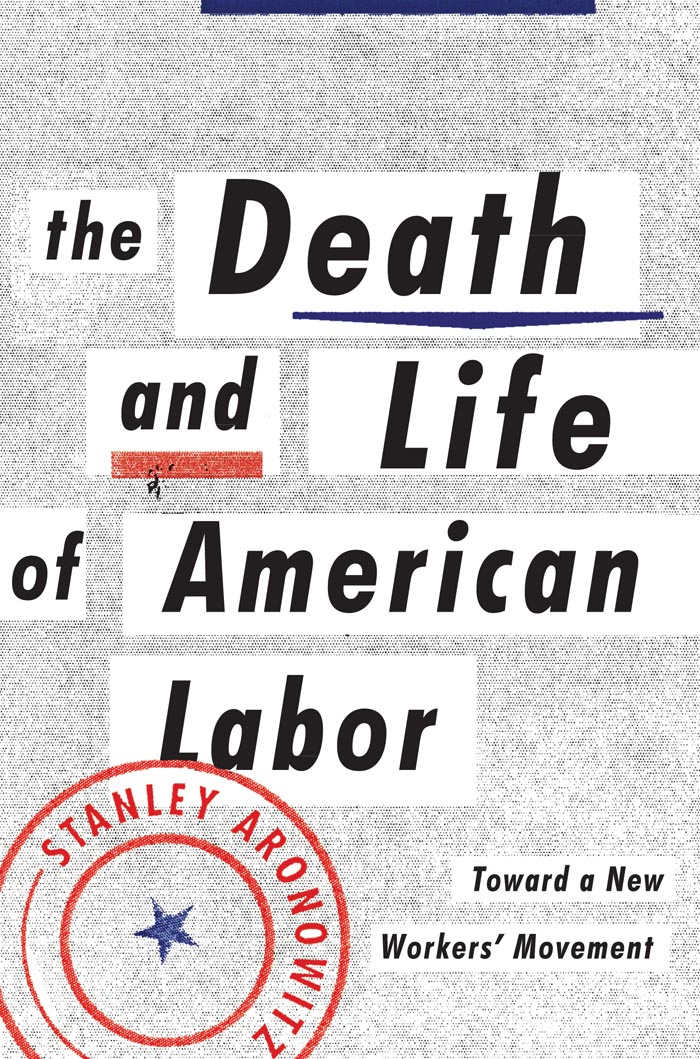 The Death and Life of American Labor: Toward a New Workers’ Movement, by Stanley Aronowitz, Verso, 2014.

How do we save our declining U.S. labor movement? The problem is clear: union density is down to 11.1 percent overall, and only 6.6 percent in the private sector. Union membership peaked at one-third of the workforce in the 1950s, then began a long decline that’s accelerated since the 1970s with globalization, automation, and a renewed corporate anti-union offensive.

Of course there are still organizing victories, and 14.6 million union members with better wages, benefits, and working conditions than most non-union workers get. But every year organized labor becomes a smaller, less important part of society.

What went wrong? Within the labor movement, the mainstream view is to blame poor enforcement of labor laws. The two accepted solutions: develop corporate campaigns to boost organizing, and push the Democratic Party to deliver legal reforms. But clearly these strategies aren’t working.

In his new book The Death and Life of American Labor: Toward a New Workers’ Movement, Stanley Aronowitz is a strong proponent of a competing view: a left critique of labor’s own structure and culture.

According to this perspective, after its dramatic growth in the 1930s and ’40s, the movement grew too conservative and staff-dominated. Labor evicted its radical wing, halted shop floor militancy, and focused on the bread-and-butter administration of contracts in partnership with capital. These changes left us too weak to fight.

A former factory worker and union organizer, and a longtime sociology professor, Aronowitz has been a critical observer of the labor movement for decades. He also draws on his experiences as a union member and leader at the City University of New York.

The book has two parts: the development of labor’s problems, and possible new directions.

In the first part, Aronowitz outlines labor relations since the Great Depression. The purpose of the New Deal reforms, he argues, was to incorporate organized labor into the prevailing political and economic system.

A period of wildcat strikes and anti-capitalist politics had bosses worried they were on the brink of losing control altogether. That brought them to the table for what’s often called “the class compromise.” In exchange for recognition and the right to bargain contracts, unions agreed to rein in strikes and let the bosses run the workplace—and the economy.

For Aronowitz, that’s where labor took its wrong turn. He describes how in subsequent decades, a labor movement that used to have all manner of radical currents almost completely lost its militancy and class perspective and stopped fighting for any alternative economic system.

Once strikes during contracts were prohibited, shop floor direct action—historically the main source of labor’s strength and power—dried up. Instead, unions handled workplace problems through the grievance system.

“prisoners of the doctrine of ‘management prerogatives,’ which prohibits workers from challenging investment decisions, price policies, or profits. Private property and the law became sacred, subject neither to collective bargaining nor to labor’s broader program. This doctrine put organized labor in a narrow position on the shop floor and in politics as well.”

Any concept of workers controlling the work process disappeared. Unions gave up on dealing proactively with the technological changes that often automated their jobs away. Outside the public sector, they’ve neglected to organize most skilled technical, professional, and office workers.

With the loss of labor’s natural power in the workplace, the labor movement has increasingly turned to the political system for assistance. But the Democratic Party is a reluctant and unreliable friend, at best.

Chapters 6 and 7 outline Aronowitz’s expansive vision for a new labor movement. His suggestions can be broken into three categories.

The first is a platform of progressive policies he argues unions should fight for: shorter hours, a guaranteed basic income, and single-payer health care. He proposes that unions create producer and consumer co-ops and credit unions. He wants to see labor lead campaigns in all important areas of life, not just workplaces—including housing, education, health care, transportation, and climate change.

But after the war, labor abandoned the field to private developers who drove mass suburbanization. Social projects in housing, health care, and recreation were largely discarded. This seems like a remarkable missed opportunity.

Second, Aronowitz proposes big changes in how unions fight in the workplace. His overall vision is a more participatory, politically radical, rank-and-file-controlled unionism based on direct action in the workplace.

Perhaps most provocatively, he suggests that we stop bargaining formal contracts, since they almost always prohibit strikes. Without contracts, workers are free to take direct action whenever it’s needed. That’s common practice in the Industrial Workers of the World and some worker centers. If workers must sign a contract, he says, it should not bar the right to strike—or it should be for a short time period.

Aronowitz advocates organizing minority unions, where the union starts up with less than a majority in a worksite. This approach was common before the National Labor Relations Act.

He argues for unions to fight harder against racial and gender discrimination in hiring, especially in the skilled trades. He says they should focus more on organizing precarious workers—meaning those who have temporary, part-time, low-wage, or insecure jobs—because this is a growing segment of the labor force.

He puts high priority on strengthening union democracy, and on international solidarity and alliances with workers’ centers. And he argues for reviving the fight to control the work process.

Third is a longer-term political project. Aronowitz wants labor to embrace the “radical imagination” that’s so crucial for social movements. He believes labor should take the lead in articulating a vision for a better, post-capitalist world.

That kind of vision isn’t just for union officers and staff. Aronowitz urges comprehensive, widespread worker education—going beyond the usual collective bargaining and labor history to take up broader issues of culture and political economy.

The growing ranks of radicalized union members would become a militant minority in the labor movement. This new “political formation” on the left would envision and enact the “cooperative commonwealth”—a concept the labor movement promoted a century ago, which Aronowitz wants to revive. It means a worker-controlled, self-managed society, anti-capitalist and genuinely democratic.

This idea of a radical political formation, I suspect, is his main passion. He implies that it has a political program, but isn’t necessarily a political party. Occupy or the Social Forum could be examples—or, perhaps, the Labor Notes community.

Radicals in the labor movement will likely agree with many of Aronowitz’s suggestions, including the need for a social vision.

However, many who are struggling just to defend what we have will retort that it’s easy to complain and compile wish lists—and that Aronowitz’s program is simply too risky to embrace. If there’s a weakness in the book, it’s the quick coverage of many issues, and lack of attention to how all these different fights can be waged and won.

But with this book, Aronowitz challenges the labor movement to decide what it wants to be. Is a union’s job to cut the best deal possible for some workers under prevailing circumstances—or could we once again lead the way to transforming our whole society? That’s a debate worth having.

Eric Dirnbach is a union staffer and labor activist in New York City.

Related
Review: On the Line: A Story of Class, Solidarity, and Two Women’s Epic Fight to Build a Union »
Walkouts Hit Amazon’s Last-Mile Stations »
Review: How Labor Can Stop ‘The Privatization of Everything’ »
Work Saturdays, Huh? How UPS Drivers Resisted by Complying »
The Strike Wave Shows the Tight Labor Market Is Ready to Pop »