Rail Workers and Environmentalists to Teach Each Other 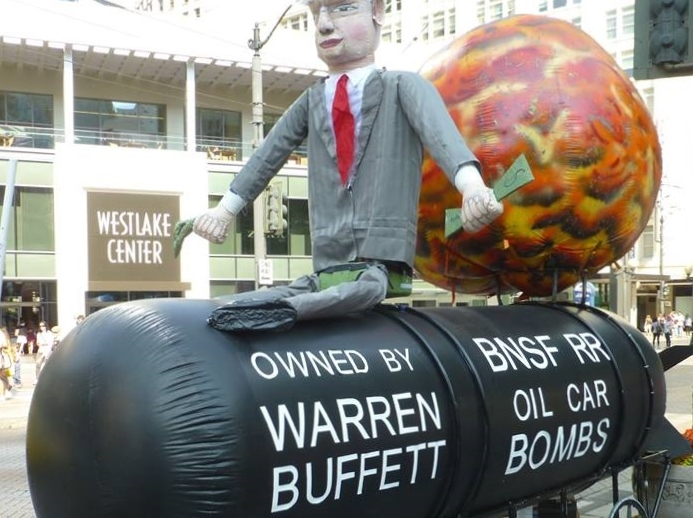 With public attention focused on the railroads in a way it hasn’t been for decades, the cross-craft solidarity group Railroad Workers United is seizing the opportunity to teach the general public “railroading 101”—and teach rail workers “environmental politics 101.”

Both those workshops, among others, will be offered at one-day conferences on “The Future of Railroads: Safety, Workers, Community, and Environment,” March 14 in Richmond, California, and March 21 in Olympia, Washington. (See box for details.)

“My excitement about the conference is having railroaders, who on a daily basis are moving these really dangerous, volatile, flammable materials, having a dialogue with communities who want it to be made safe,” says activist Gifford Hartman.

“To my knowledge it’s never been done,” says Seattle switchman-conductor Jen Wallis. “Rail labor hasn’t worked with environmentalists to the degree that steelworkers and longshoremen and Teamsters have. It’s all very new.”

RWU is partnering with the Backbone Campaign and other groups to organize both events. The idea is to bring together rank-and-filers, environmentalists, and the general public.

Just as important as learning each other’s issues, Wallis says, is that “we get to know each other… So we have people we can call on when we have an issue on the table, and they can do the same with us.”

In the wake of the Lac Megantic disaster and other derailments, the public is alarmed about oil trains—and about the movement of trains in general through their communities.

Hartman points out these trains often run through working-class communities of color, exposing the local populations to “incredible risks.” For example, many oil trains originate in Richmond, California, a company town dominated by a giant Chevron refinery.

Just like rail workers, Hartman said, “I think people in that community also feel isolated. When people contact me about the conference they’re excited to talk about these issues.”

Environmental activists are up in arms about the amounts of fossil fuels moving by rail. Farmers and other shippers are concerned about the congestion that has occurred in recent months, due in part to the oil boom. All this attention gives railroad workers a golden opportunity to educate the public about the railroad’s efficiencies, its value to society, and its potential.

It also gives the workforce an opportunity to inform non-railroad workers about the situation that we face on the job every day. The public generally has no idea what goes on daily on America’s railroads. “When they hear about our issues, the schedules we have to endure, the stress—it opens their mind up,” Wallis says.

“And in return this is an opportunity for us to learn more about the fossil fuel industry. We don’t really have a say on what we move, but we do have a say in how we can move it safer.”

The Future of Railroads: Safety, Workers, Community, and Environment

These safety issues are of concern not just to railroaders, but also to environmentalists and the community at large. Non-railroaders who attend will come away with a deeper understanding of our workplace and a greater appreciation of the issues we face—and are sure to become valuable allies in our future fights.

And railroaders will gain a better insight into the environmental movement, environmental politics, and how to better forge alliances and work with public citizens’ groups.

Tentative workshops and discussion topics at both conferences include:

Ron Kaminkow is RWU’s general secretary and a working engineer in Nevada.

Related
Viewpoint: As the West Coast Burns, We Don’t Need Unity. We Need to Point the Finger at Those Responsible »
The Australian Green Bans: When Construction Workers Went on Strike for the Environment »
Lessons from the First Union Climate Strike in the U.S. »
How Seven Thousand Quebec Workers Went on Strike against Climate Change »
Viewpoint: A Green Transition Is Inevitable, But Justice Is Up to Us »