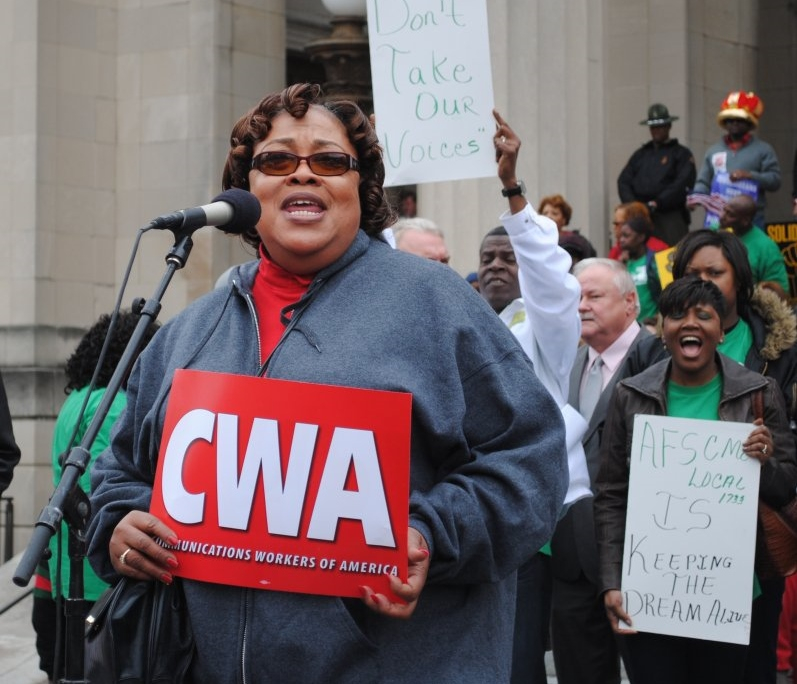 United Campus Workers Vice President Thelma Jean Rimmer spoke at a 2011 rally. The non-majority union runs on a shoestring budget, relying on members' creativity. Its latest battle is to block the University of Memphis from replacing temporary workers' Social Security with a privatized version, the "FICA alternative plan." Photo: UCW-CWA.

Though we don’t have a union contract, workers at the University of Memphis last month took quick action and backed management off its plan to privatize our Social Security—for now, anyway.

The university made the announcement December 12: on just a week’s notice, almost 2,000 temporary workers, including one of the authors of this article, would be laid off. We could reapply in hopes of getting our jobs back.

The affected workers included many long-term temps, such as people working as data and lab techs, custodians and groundskeepers, and lots of adjunct faculty.

Public employees are denied our right to bargain in Tennessee, but that hasn’t stopped us from organizing. As a non-majority union, United Campus Workers (UCW-CWA) runs on a shoestring budget and relies on member activity and creativity to win.

The mass layoff was part of a new temporary employee policy. If rehired, we would no longer participate in Social Security. Instead, we would be enrolled in a “FICA alternative plan.”

The university implied this new plan would amount to a pay raise and give us more flexible retirement options. We were, of course, skeptical.

First off, we wondered, how is this even legal? Normally an employer is required by law to deduct 6.2 percent of an employee’s paycheck for Social Security, and match it with an equal employer contribution.

With the FICA alternative plan, the employer would instead deduct 7.5 percent, hand it over to a private financial firm—and make no employer contribution.

It turns out that Congress created this type of plan for public employers in 1990, overturning previous regulations that had ensured that public employees could not be exempted from Social Security. These FICA alternative plans can only affect temporary seasonal workers in new positions, which is why the university had to fire and rehire us. They’re used by various public entities, particularly in the South.

Effectively, it’s privatization. Through these plans, millions of dollars annually are cut from Social Security and handed instead to private banks to manage. (The banks, of course, take their cut by charging fees.) Net compensation to workers is reduced.

For decades the financial sector and its Republican allies have dreamt of privatizing Social Security. When George W. Bush proposed a privatization plan in 2005, he ran up against a maelstrom of protest from senior citizens. Yet FICA alternative plans snuck through without a whisper of dissent.

A MEDIA STRATEGY THAT WORKED

When the layoff policy was formally announced, we formed an ad hoc communications team. Honestly, our primary goal was to bruise the administration, to weaken it for future battles. We weren’t that confident that we would win.

But we got ahold of a professional communications staffer from another union, and got some great advice. Once we had the ball rolling, we received additional media and political support from our international union.

It also changed the tone. Instead of a story about cuts to workers’ retirement plans, we made it a story about the university attacking Grandma and Grandpa’s income. Once administrators faced the possibility of opposition not just from workers, but also from senior citizens, they balked.

Just five days after announcing the plan, the university reversed course. The plan to privatize our Social Security was suspended—though the layoffs went ahead.

MORE THAN JUST OUR MEMBERS

We know a media strategy alone typically isn't enough to win. But this experience showed us it’s part of a winning mix. In a world where corporate media play the dominant role in producing opinions, we need to be savvy.

We also responded quickly, and held administrators personally responsible. They probably thought the start of winter break would be a slick time to push through a contentious policy; we turned the timing into an opportunity. The slow news cycle increased our chance of coverage. Plus, it meant that whatever headache we caused would ruin administrators’ Christmas plans.

We’re still waiting to see that all temporary workers are hired back. Unfortunately, other parts of the new temporary worker plan are still going forward, primarily to skirt the Affordable Care Act.

And we haven’t permanently defeated the Social Security privatization scheme, yet. It’s on hold for now, but the university president has already announced plans to formally propose it to the board of regents in March.

But we’ll work to make his position untenable by leveraging the lessons we learned: sometimes you have to pick fights even if you don’t think you’ll win; always ask for help; and make sure our message appeals to a broader constituency than just our members.