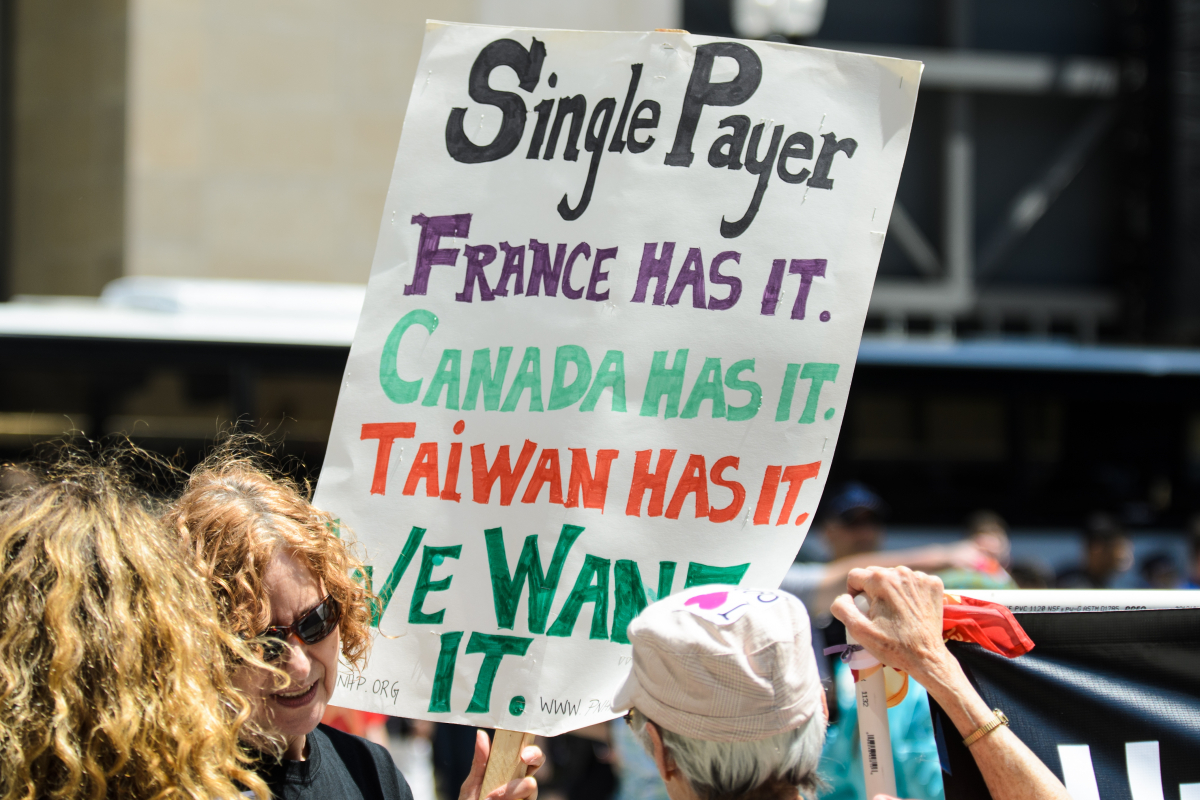 Supporters of a single-payer, Medicare-for-all health care system in the U.S. were puzzled September 27 when Swiss voters rejected a reform proposal by 62 percent.

The new law would have replaced the current system, where about 60 insurance companies offer mandatory health coverage, with a single insurer, the government. It would have offered all medically necessary care, paid for by taxes adjusted to each person’s ability to pay.

To Americans who’ve worked for such a system here, nationally and state by state, it was a blow. What’s not to like about single payer?

Swiss and American media, academia, and business sectors rushed to interpret the results. Virtually all crowed that the Swiss people had rejected government-run national health insurance because they preferred private insurers.

But these convenient interpretations rely on false assumptions to justify a model of health insurance that is unraveling—less conspicuously in Switzerland, but dramatically in the U.S.

Let’s look at what’s wrong with these pro-business interpretations, and see what lessons the Swiss referendum has for single-payer advocates here.

He notes that in 1996, the Swiss voted for an individual mandate that compels everyone to buy a basic package of health services. That law eliminated discrimination for pre-existing conditions, meaning companies have to sell equal plans at equal prices to all customers. The government subsidizes low-income people. In Millman’s view, the resulting Swiss system is very much like Obamacare.

Another policy reporter, Avi Roy from Forbes, asserted that Obamacare (and Romneycare before it) was modeled on the Swiss system: people shopping among competing private plans with little government interference.

Roy says the referendum demonstrates the “political popularity” of universal coverage via private insurance. He concludes that because the Swiss have rejected single payer, there’s good reason to believe Americans will reject it, too.

What’s Wrong with the ‘Official View’?

These interpretations are based more on ideology than on facts. Why?

First, Swiss health care is not a version of Obamacare. The differences are critical to understanding the implications of the Swiss referendum for health care reform here.

Third, the referendum does not prove that the Swiss don’t want government involvement in health care, nor that they like private insurance companies. Quite the opposite.

Indeed, an analysis of a series of referendums over several years shows that, like the U.S. population, the Swiss are increasingly unhappy with treating health care as a business, rather than a social good.

<  >1) Obamacare is not a version of the Swiss system.

The current National Health Care Law, known as LaMal, requires that everybody living and working in Switzerland carry health insurance—we call this an “individual mandate.” So the Swiss are required to purchase insurance for a uniform, comprehensive package of medical services.

The government also compels insurers to sell policies to everybody at the same price, irrespective of health status, medical history, gender, age, or location (within each canton, the administrative equivalent of a U.S. state). A 25-year-old and an 80-year-old pay exactly the same premium for the same plan. The only exception: those under 25 pay substantially less.

The government also enforces a “basic” package that is very comprehensive—in the U.S., some call it “Cadillac,” as if only spoilt Americans would dare demand it! Thus basic insurance, Swiss-style, includes outpatient care—essentially whatever a doctor prescribes—hospital care, mental health, all pharmaceuticals on the government’s list, some rehabilitation services, some dental care, some herbal medicine, and acupuncture.

Importantly, the government forbids insurers to make a profit from the sale of the mandatory package, and it compels them to contract with every single health care provider in Switzerland.

The government also compels mechanisms to deal with prices. Within each canton, prices must be negotiated between associations of providers and insurers, and everybody must abide by them. So providers within a canton are paid equal amounts for equal services, regardless of which plan the patient has.

Finally, the state also enforces limited deductibles (about $300 U.S.) in all plans, and a maximum out-of-pocket cost of about $700.

As you can see, this looks nothing like “no government interference.”

Nor does it look like a version of Obamacare. A few comparative points:

So the belief that Swiss health care and U.S. health care after the ACA are “more or less the same” is quite misguided.

At the center of the ACA is a well-oiled money-making machinery for the medical-industrial complex: insurance companies, Big Pharma, and for-profit (and many non-profit) medical establishments.

<  >2) Over the last decade corporate interests have hijacked the Swiss system, despite the strong government oversight.

This has led to increasing overall and out-of-pocket costs, making the Swiss system the third most expensive in the world.

To control costs, the Swiss government has promoted managed-care options and encouraged users to comparison-shop. So in addition to the classic comprehensive plans, insurers are offering narrower provider networks and higher deductibles and co-pays, and users are prompted to choose plans annually.

However, the Swiss appear not to like all these “new choices” after all, because in a 2012 referendum more than 70 percent voted against a dramatic expansion of managed care, proposed as a key mechanism to “control costs and improve the system.” And only a very small minority chooses to change plans every year.

Last, a growing number find health care unaffordable and are failing to pay their premiums.

Simply put, all the problems the Swiss are grappling with are rooted in the for-profit nature of the companies that participate in the system. As these companies become more financially successful, and hence more powerful, they get harder to tame—and their influence on the politicians who decide health policies grows stronger and stronger.

Clearly, even in the best-case scenario—the highly regulated environment of Swiss private insurers—entrusting them with the provision of health care is assigning a fox to guard the henhouse. The attempt to achieve justice in health care via competing private insurers is a pipe dream.

<  >3) The defeat of the single-payer referendum does not mean the Swiss people reject a government-run system and support private insurance.

The Swiss have rejected almost all referendums since 1891—only 20 out of 191 have succeeded, even when issues were popular.

Critically, one successful referendum was LaMal, the 1996 health insurance law that banned profit from the sale of medically necessary care. It also allowed the government to pass on money from companies spending less on patient care, to those spending more—certainly not an indicator that the Swiss shun “government interference” on behalf of ordinary people, nor that they trust private insurance to do well by them without supervision.

Also worth noting: in 2007 single payer was rejected by 71 percent, but the figure fell to 62 percent in 2014. Maybe the Swiss are beginning to cut through the anti-single-payer propaganda?

For a detailed comparison of the U.S. and Swiss systems, see my article “Is the Swiss Health Care System a Model for the United States?”

For a thorough, albeit ideological (i.e. supportive of “market forces”) review of the current state of the Swiss system, see the 2011 OECD report.

For a full “reality check” of the Affordable Care Act, see “Why do Americans still need single-payer health care after major health reform?”

To understand the single-payer movement’s recent setback in Vermont, and what comes next, read “Vermont Governor Backs Away from Health Care for All.”

Why, then, was single payer defeated? What can we learn?

First, we need to grant that the state of Swiss health care may be of concern for the Swiss (they seem to have lower tolerance than we do!), but it is still not as bad as in the U.S. People who experience the greatest barriers to care in Switzerland are the most politically disenfranchised—the young, poor, women, immigrants, much like here—so the problem has yet to affect the so-called middle class enough to pass a referendum.

Second, we can see the extraordinary power of corporate propaganda. The scare tactics deployed by corporate interests in Switzerland were quite extraordinary, both in 2007 and this year. Likewise, their interpretation of the results was designed to discourage supporters of public health care—to make us think we’re more alone than we really are.

The Swiss referendum teaches us that:

Claudia Chaufan, MD, PhD, is an associate professor at the University of California San Francisco and a member of Single Payer Now and of Physicians for a National Health Program.

Related
Viewpoint: AFT's Refusal to Challenge Democratic Establishment Leaves Every Teacher Behind »
On Medicare for All: Fight for What We Want, Not What We Think We Can Get »
Racial Disparities in COVID-19 Point to Need for Medicare for All »
The VA’s Fourth Mission and the Pandemic »
My Quarter-Million-Dollar Baby »

Thank you, Claudi Chaufan, for your excellent article.

You wrote that "scare tactics deployed by corporate interests in Switzerland were quite extraordinary."

As you probably know, scare tactics are used in the United States also. The result, multiple times, is that Americans vote 80% against universal health care types of questions at the ballot box. An exception is in Massachusetts where voters answered 67% YES on a non-binding (no impact) resolution at their ballot boxes.

Americans need to keep a few facts in mind:

-- All other free-market countries have universal health care.

-- They have health care for all and longer life expectancies than ours.

-- They have no huge medical bills and no medically related bankruptcies.

More about the Scare Tactics:
Polls document that an incredibly high 85% to 92% of Canadians LIKE their health care. The scare tactics that occur in the United States within very expensive professionally-produced media campaigns are partly based on the very small percentage of Canadians who have concerns about their health care.

Brace yourself, my fellow Americans, with the facts and be strong supporters of U.S. universal health care: Improved Medicare for All **.

** for which single-payer health care is
the associated detailed policy solution
for a national health program.

Summary of this set of comments:
--- Some corrections and explanation follow regarding the sign in the photograph.
--- The USA has an opportunity to have the best universal health care, health care for all.

ABOUT THE SIGN IN THE PHOTO. The photograph associated with the article shows a sign these words on it. "Single Payer ... France has it. Canada has it. Taiwan has it. WE WANT IT." Some clarifications follow:

The 3 countries all have universal health care, just like all free-market countries except the United States. That does not mean that they have single-payer health care.

That is, France, Canada, and Taiwan have universal health care.

Taiwan's universal health care includes a policy of what is called "single-payer" and has one of the most efficient methods for paying for health care.

France's universal health care covers French citizens / residents, but it does not have a single-payer policy, since it has hundreds of non-profit "sickness funds". (Germany and Swizerland also have non-profit health care funds.)

We in the United States want universal health care. More specifically, we want a policy of single-payer health care as part of implementing Medicare for All, a national health plan. The U.S. Medicare for those 65 years and older was single-payer between 1965 and 2003. It was very efficient. We have an opportunity to improve Medicare (including having it once again be single payer) and have it be for all Americans, not just 65 years and older.

A FANTASTIC OPPORTUNITY FOR THE UNITED STATES.

The beauty of this clarification of facts is this:
From a viewpoint of competitiveness across all free-market countries the United States has a chance to have the best universal health care, an Improved Medicare for All.