Review: How the U.S. Economy Was Built on Slavery 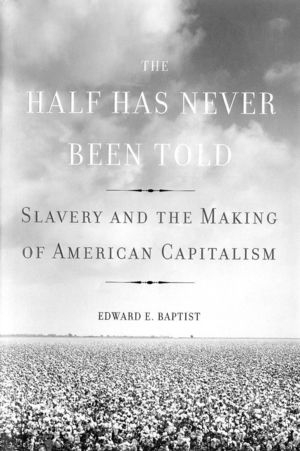 This young country’s economic expansion was fueled by the buying and selling of African people, and by the wealth their labor generated. The Half Has Never Been Told: Slavery and the Making of American Capitalism, by Edward Baptist, Basic Books, hardcover list $35, Kindle $16.99.

H. Rap Brown, coordinator for the Student Nonviolent Coordinating Committee, infuriated many well-meaning but historically uneducated white citizens in 1967 when he declared, “Racism is as American as apple pie.”

For those who still doubt Brown’s words, Edward Baptist’s rigorously researched book The Half Has Never Been Told may finally convince them. This young country’s engine of economic expansion was fueled by the buying and selling of African people, and by the wealth their labor generated.

Baptist’s book fluidly interweaves economic analysis of the slave trade and the production that came from it—principally cotton—with heartbreaking stories of the lives and suffering of the people who were enslaved.

After the U.S. Constitution was accepted, politically connected men of finance in the North and South—many of them Supreme Court justices, senators, and congressmen—borrowed money from the new, federally financed U.S. Bank.

These credit lines enabled them to buy up huge tracts of land in the new territories of Alabama, Georgia, Texas, and Louisiana. They bought slaves on credit as well, and then took out mortgages on their “property”—the slaves themselves—to finance their enterprises.

Demand for raw cotton thread exploded as new industrial technologies expanded the British manufacture of cotton cloth. And when Eli Whitney invented the cotton gin in 1793, he multiplied tenfold the speed at which cotton bolls could be converted into thread. That set the stage for a huge demand for farmland, and for slaves to clear and work the new farms.

Speculators bought slaves in the original Eastern seaboard colonies, shackled the men in heavy iron chains and the women in leather bonds, and marched them, in long lines called coffles, hundreds of miles to the new territories.

With money borrowed from the U.S. Bank, white Southerners of modest means became slave speculators and grew wealthy. Those who borrowed to purchase slaves and new land accumulated huge wealth.

SPEED-UP IN THE COTTON FIELDS

But even the transportation of a million slaves into the new territories and the clearing of endless acres of land could not meet the exploding demand. For a time cotton was the most commonly traded commodity in the world.

The slaveholders developed a brutal system for speeding up the work of the cotton pickers. Each day as the sun finally set, the men, women, and children who had toiled all day in the fields were forced to submit their baskets of cotton for weighing.

If they did not meet the growers’ production requirements, they were whipped, with a newly developed weapon that left open wounds. Slaves fled the weighing station in terror when they knew their baskets would be “light.” But they never escaped the punishment.

Once the slave laborers had shown they could pick the required weight in a day, the slaver would increase his demand.

In this way, the average weight picked in one day increased from 28 pounds to over 100, while the production of cotton increased from 1.4 million pounds in 1800 to 2.2 billion by 1860.

Opponents of slavery won a ban on owning slaves in the Northern states. But those regions did not support cotton production, so their loss to slavery was insignificant.

And because the constitution allowed slave states to count each slave as 3/5 of a person—even though enslaved people weren’t allowed to vote—the South dominated Congress and supplied the majority of presidents and Supreme Court justices.

Slave rebellions were brutally suppressed. Large numbers of slaves were hanged and beheaded, whether there was evidence against them or not. Since slaves had no rights under the constitution, everyday violence against them was accepted as legal.

Baptist explores many aspects of Southern culture that helped enforce slavery, including the objectification of black women as sexual objects. Male slave owners justified brutal abuse of enslaved women by characterizing black women as promiscuous and welcoming of violent sex.

Black men, meanwhile, were characterized as rebellious, untrustworthy, and violent. The slave owners who promoted this image were alarmed by the sporadic slave uprisings and especially the overthrow of Napoleon’s army in Haiti—yet apparently they never looked in a mirror, or they would have found those characteristics among their own kind.

Such stereotypes live on today. You can see them, for instance, in police violence and the media portrayals of protests in Ferguson, Missouri; Staten Island, New York; and countless other communities. The stereotypes endure, unfortunately, in the minds of too many white citizens as well.

Political leaders in the North and in Europe proclaimed their opposition to the slave trade. But at the same time they bought and sold mortgages and other financial instruments that were derived from the slave labor camps—plantations—and from the valuable commodities raised in those places of torture.

Its poignant and often horrifying stories make this book more than just a powerful historical analysis.

Using New Deal researchers’ recorded interviews with former slaves, memoirs by escaped slaves, and newspaper articles from the time, Baptist draws vivid portraits of the lives of the people in chains. Weaving the personal together with the didactic, he has crafted a powerful document.

The book enlightens the mind and pierces the heart. It should summon our collective will to finally redress the lingering injustices created by this most American institution.

Timothy Sheard is the editor of Hard Ball Press.

Related
The Sign Says It All: How Unions Can Stop Employers from Crying Poor »
A Life in Transit: ‘What You Can Get Is Set by How Far You Are Prepared to Go’ »
When Workers Swapped Segregation for Solidarity »
Chicago Passes Union-Backed Bill for Civilian Oversight of Violent Cops »
Review: White Workers Who Buy into Racism Are Shooting Themselves (and Everyone Else) in the Foot »

Another great book is "Ten Hills Farm: The Forgotten History of Slavery in the North." http://tenhillsfarm.com/Artist.asp?ArtistID=11315&Akey=3CTF7J7Z