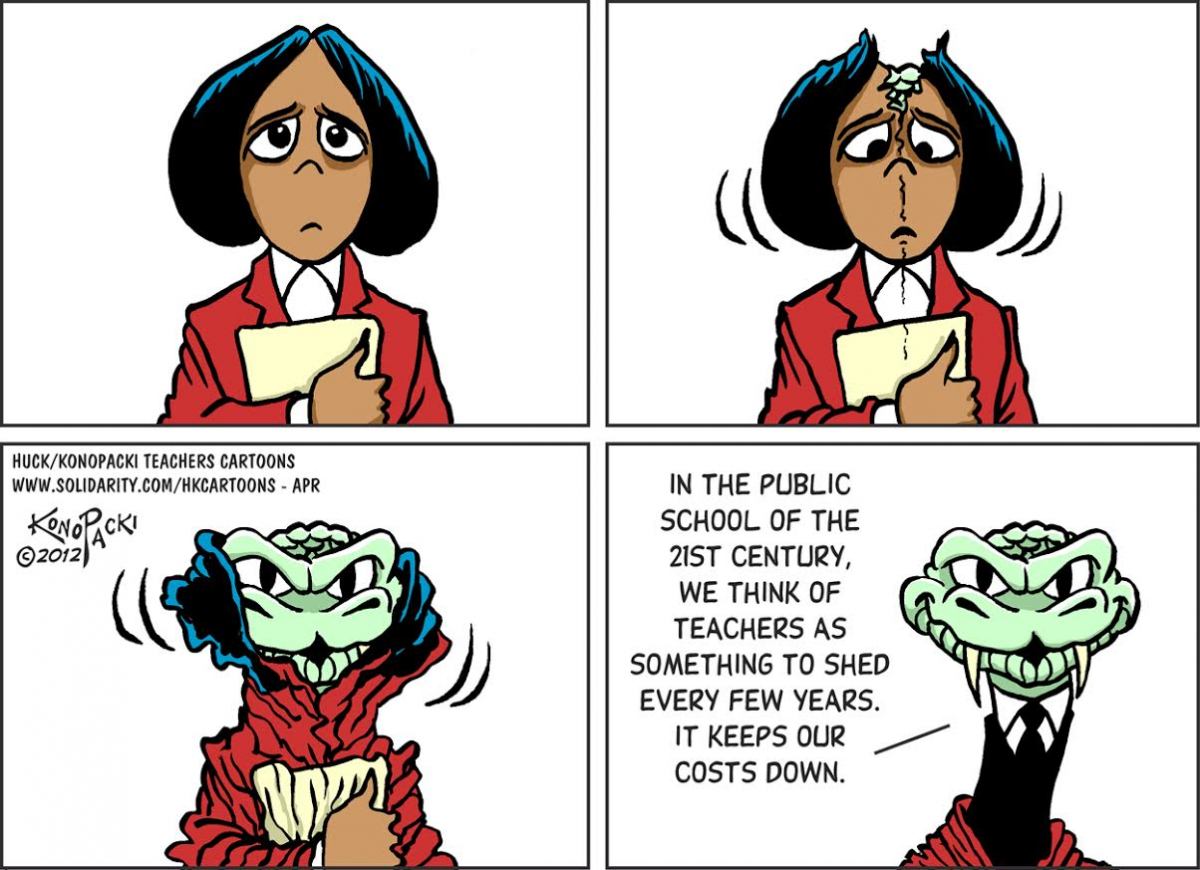 In my five years organizing with non-union health care workers who wanted to join the union, job security was always one of their top issues.

Firings were arbitrary, they said. Evaluations were based on favoritism. Experienced employees were fired just because they were more expensive.

So it always surprises me to hear regular people repeat the smears against teachers’ job security. They’re parroting the message of those trying to weaken one of the largest remaining sectors of unionized workers in this country.

When it comes to teachers’ right to job security, you have to look at why management wants to get rid of it—if you want to tell fact from fiction. A few common myths:

Teacher tenure is not like academic tenure, which is set up through each university. Faculty members jump through many hoops before becoming tenured.

But maybe the differences are beside the point. Both systems lay out clear grounds for dismissal. A teacher or professor can be fired—for cause.

K-12 teachers first won tenure rights over 100 years ago, but it wasn’t through collective bargaining agreements. The push for tenure systems came out of the desire to protect teachers and districts from the politically motivated firings that came with patronage politics.

It became a way to protect women, pregnant teachers, and people of color from discrimination. Also teachers with controversial views—read, “pro-union.”

In fact, today charter school teachers are organizing unions so they too can bargain for, you guessed it, job security.

Goldstein also looked at comparable private sector data. These jobs too were more secure than teaching.

If teachers violate policy or can’t do their jobs, it’s up to administrators to make a case to remove them. That’s what due process means.

Myth #3: Teacher tenure is too protective—unlike other sectors’ union protections.

Sure, the process could be tweaked—for instance, expedited, so it doesn’t punish the unfairly targeted and doesn’t draw out the appeals of those not equipped to do the job. (See Union Fights Teacher Jail to read how Los Angeles teachers get caught in a legal limbo.)

But that’s not what they want, the people pushing to get rid of due process.

Look at Chicago, where the unionized teaching force has shrunk by 20 percent, and black teachers dwindled from 45 to 29 percent. Teachers are facing layoffs year after year, while non-union charters grow.

Hard to make the case that teachers have too much job security, isn’t it?

Emboldened by anti-tenure rhetoric, Philadelphia, Chicago, and L.A. have been bypassing seniority provisions in district policies and in union contracts. When budgets are squeezed, districts push to replace veteran teachers with inexperienced hires at the bottom of the pay scale—or not replace them at all, and make remaining teachers do more.

That’s not about what’s best for students. It’s what bosses do, when they can get away with it, in any industry.

When people say, “Teachers may have needed tenure back then, but now things are different and they have it too good,” remember: you could easily replace the word “tenure” with “union.”

Samantha Winslow is co-director of Labor Notes.samantha@labornotes.org
Related
Minneapolis Strikers Demand a Living Wage for the Lowest-Paid Educators »
Richmond Educators Are First In Virginia to Win Bargaining Rights »
Twin Cities Teachers and School Employees Gear Up for Strike »
As Omicron Rages, Teachers and Students Fight for Safety Measures in Chicago and Elsewhere »
Teachers Strike against a ‘Heartless’ School Board in Biden’s Hometown »