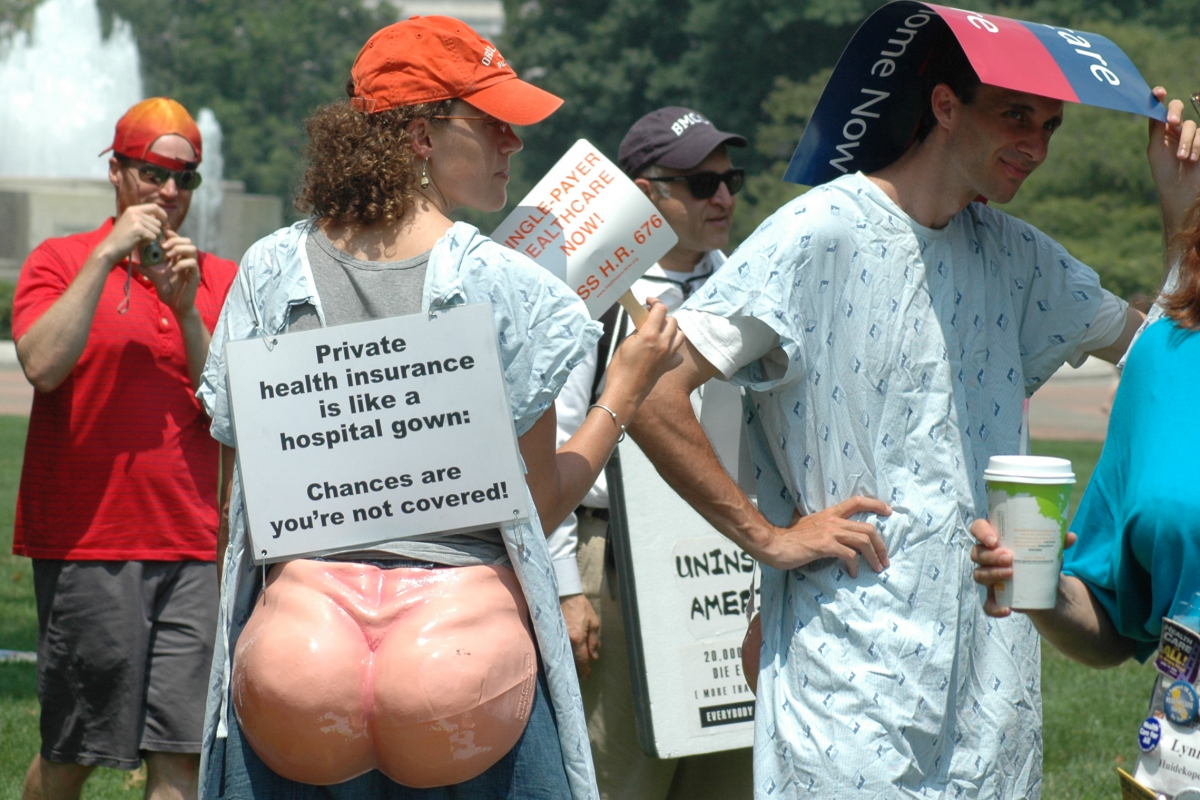 With for-profit insurance, coverage can be skimpy. Photo: Public Citizen.

Obamacare enrollment season is here again, and people with insurance through the Affordable Care Act’s marketplaces are being urged to look at their options.

It’s been a year since the exchanges originally opened. Despite spectacularly incompetent website design and poor management by the federal and many of the state exchanges, most of the glitches were finally resolved, and 7.3 million people signed up and paid for private insurance through the marketplaces.

Seven million more people also gained coverage under Medicaid in the past year—despite the fact that 23 states continue to refuse to accept federal funds to expand Medicaid to their own residents, affecting 11 million more Americans.

Late last year, the Labor Campaign for Single Payer posted our Briefing Paper, ”10 Things Unions Need to Look Out for When Bargaining Under Obamacare.” We asserted that, “because it relies on employment-based coverage to provide the lion’s share of healthcare insurance while, perversely, undermining key aspects of that coverage, we have concluded that the ACA will place new stresses and pressures on collective bargaining.”

Are you preparing to bargain health care? The Labor Campaign for Single Payer has just posted a new video, “How to Negotiate Healthcare under the Affordable Care Act,” a 30-minute tutorial for union activists and staff.

As we predicted, the assault on employment-based benefits continues unabated. A recent survey reports that 71 percent of Fortune 500 companies plan to raise employee contributions for their health insurance, and 73 percent have already moved or plan to move to so-called “consumer-directed health plans,” a fancy catchphrase for skimpy plans that shift costs onto the consumer.

In addition, 30 percent report that they plan to dump pre-65 retirees onto the health insurance exchanges, and 24 percent are moving to keep part-time hours under 30 per week. Employers are required to provide health insurance for all full-time employees (counted as those working 30 hours or more) or pay a penalty under yet-to-be-enforced ACA rules.

Walmart recently announced it was eliminating health care benefits for 30,000 part-timers who work less than 30 hours per week. It’s joined by dozens of other major corporations in the retail and hospitality industries who are eliminating employer-provided benefits for their low-wage and part-time workers.

These actions highlight the contradictory and unstable consequences of the ACA. Many of these workers may be able to access more affordable benefits in the health care exchanges, while Walmart gets away with a huge shift of its employment costs onto the backs of taxpayers.

Cost shifting isn’t only affecting low-wage workers. In Philadelphia, an unelected School Reform Commission unilaterally cancelled its contract with the Philadelphia Federation of Teachers, pulled out of the existing Health and Welfare Fund, eliminated retiree benefits, and imposed a 10 to 13 percent co-pay on working teachers.

Unions are wrestling with the new bargaining environment created by the Affordable Care Act. The Labor Campaign for Single Payer understands that the only long-term solution is to take health care off the bargaining table by making it a right for everyone in America. In the meantime, we stand in solidarity with workers everywhere fighting to defend hard-won benefits.

Getting ready for contract negotiations? The Labor Campaign for Single Payer has just posted a new video, “How to Negotiate Healthcare under the Affordable Care Act,” a 30-minute tutorial for union activists and staff.

The video was prepared by the United Electrical, Radio and Machine Workers union (UE), based on their extensive bargaining experiences under ACA. It includes recommendations for contract language, as well as language to avoid.

Mark Dudzic is National Coordinator of the Labor Campaign for Single Payer.

Related
Teamster Insurgents Plan for a Win—And What Comes After »
Countdown to a Strike Tonight at John Deere »
The Real-Life Auto Strike Behind the Runaway Netflix Hit Squid Game »
Interview: A Mexican Auto Worker on the Fight for a Real Union at GM's Silao Plant »
John Deere Workers Overwhelmingly Reject Contract, Could Strike Wednesday Night »