Protests Break the Silence of Grief over Turkish Mine Disaster 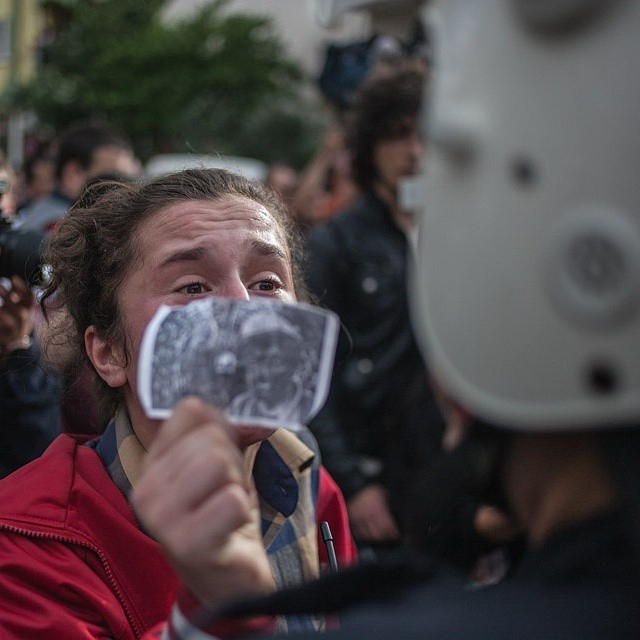 Since the Soma mining disaster there have been no new measures to prevent similar incidents. Instead there is a strict ban on commemorations, protests, and union activities. Nonetheless, protesters have returned to the streets. Photo: Koda Collective.

In one of my condolence visits in Soma, Turkey, I sat next to a young widow with children. She did not speak, she did not hear, but her house was full of all kinds of charity goods.

It’s been a hundred days since 301 miners were killed. Each passing day we understand better: what happened May 13 was no accident. It was the result of privatization, corporate negligence, and an indifferent government.

There’s been no prosecution. There are no new measures to prevent similar incidents. What has been imposed, instead, is a strict ban on commemorations, protests, and union activities.

Grief continues, but the fight has started as well. People are returning to the streets for meetings and protests. As I left town, a widow’s voice echoed in my ear: “Do not shut up. This silence killed my husband!”

A Dead End in the Mines

As part of the government’s push for privatization, public mines in Soma and other mining cities have been rented to private companies.

Each company sets up a patchwork of subcontractors. Workers’ wages and measures for occupational health and safety are just seen as budget items to be minimized.

The average miner’s salary of 1,200 Turkish lira (about $550 U.S.) is not much higher than the official hunger limit. Shifts can be as long as 12 hours. Time between shifts and days off are inadequate. Protective equipment and training are insufficient.

The saddest part of the picture is the frivolity of official inspections and the indifference of the government. The working conditions create death traps for miners. The mine inspectors spend time at luxurious hotels and then return to Ankara, the capital.

The government ignored warnings before the Soma disaster. Now it tries to cover its tracks by giving money, goods, and houses to workers’ families, while authorities try to subdue independent unionization activities.

In many sectors in Turkey, unions are compared with miners’ lanterns, they light your way and help you when you are alone.

Most miners in Soma are union members. The union building stands in the city center, right next to the administrative governor’s building and just as big.

But what the union does is similar to what a company’s H.R. department does. Union officials do not visit the mines. They do not let workers participate in decision-making. Right after the blast the union made an announcement that everything was normal in the mine—even before the government and the company did.

The incident has changed the union climate. The Progressive Union of Mine Workers’ (Dev Maden-Sen), an affiliate of a progressive union alliance, DİSK, has started to increase its membership and strengthen its organization in the region. Its goal is to create “a democratic and struggling union movement.”

Despite various barriers, DİSK has been holding mass meetings in the mines and mountain villages. Families participate. Miners are raising their voices about their own rights.

Miners in Soma visited the Parliament during talks on a proposed law to expand subcontracting, though some weren’t allowed to enter because they were wearing work uniforms and boots.

They are demanding that those responsible for the disaster be brought to justice; that the mines be nationalized again; that subcontracting be banned; and that occupational health and safety measures be enforced.

From Chile to Soma

We still remember the mine accident in Chile in 2010, where miners were rescued after 69 days. Chilean miners became the symbol of hope.

That mine’s foreman, Luis Urzua, and Rodrigoe Reveco from the rescue team, visited Soma. The Chilean mission got together with members of DISK and Dev Maden-Sen in the county of Kınık.

Brother miners held long emotional embraces. Turkish miner Mr. Ali Haydar asked, “They sent us imams instead of rescue teams, were you rescued by a priest?” The answer was obvious, but common grief had ended their conversation.

Kıvanç Eliaçık is director of the International Relations Department of DİSK, a progressive union alliance in Turkey.