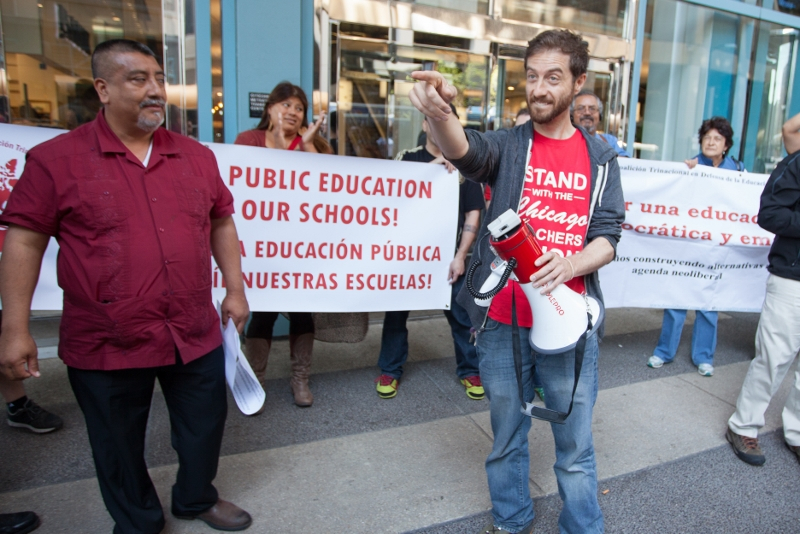 Teachers from Canada, Mexico, and the U.S. rallied outside the U.S. Department of Education's Chicago offices in defense of public education in May.

An elderly teacher from Greece approached her at a recent international teacher conference, recalled Kristine Mayle of the Chicago Teachers Union, and despite his lack of English, recited the lyrics to hip hop trio Rebel Diaz’s tribute “Chicago Teacher.”

Teachers facing similar conditions are inspiring each other across borders. A few years ago the Chicago Teachers were the ones getting their inspiration from teachers in Canada and Mexico.

It began with a conference of the Tri-National Coalition, a group founded in 1993 to unite teachers in the three countries, who would all be facing the North American Free Trade Agreement’s anticipated assault on public education.

A Different Kind of Union

Jackson Potter boarded a plane in April 2008 to attend the coalition’s conference, hosted that year by the United Teachers of Los Angeles (UTLA).

At the time, Potter was a history teacher at Englewood High on the south side of Chicago. He and other rank-and-filers and community members were fighting school closings across the city—with no help from their union officials or staff.

“The Chicago Teachers Union did nothing to stop the closures,” explains Pauline Lipman of the University of Illinois at Chicago’s Collaborative for Equity and Justice in Education. “Teachers were forced to operate outside the union, and work with the community and parents.”

She was the one who told Potter about the Tri-National Coalition conference, which would offer him examples from Mexico and Canada of a very different kind of teacher union.

“These are unions that exhibit tremendous courage,” Lipman said. “They aren’t simply going to fight for their teachers, but they are challenging the entire neoliberal agenda.” That meant battling against privatization and school funding cuts.

Potter wasn’t sure what to expect in L.A. But the conference exposed him to the Progressive Educators for Action Caucus (PEAC), the reform caucus that had just taken leadership of UTLA.

“It was a very different model than our union,” said Potter. And it gave him a way “to start thinking through how it would look different, and feel different, if we were able to shape the union policies and the approach to the membership.”

The three-day conference was jam-packed with workshops and speakers. Potter also met Jinny Sims of the British Columbia Teacher’s Federation. She had led an illegal strike, after the Liberal government refused to meet the teachers’ demands for improved classroom conditions, the ability to collectively bargain, and a fair pay increase.

A week into the strike, the BCTF was charged with contempt for violating a Labour Relations Board order, and its funds were frozen. But the community rallied around the teachers, providing them food and support. Two weeks later, victorious B.C. teachers returned to their classrooms with a new contract, though they still didn’t have the right to collectively bargain.

Sims “talked very honestly about the risks that were taken,” said Potter, “and the need to engage the broader community and the public around these vital issues. How do we resource classrooms, how do we ensure there is low class size, how do we connect the things that our members value that also resonate with the broader communities we serve?

“It was a moment that was obvious to me,” Potter said. “She was articulating something that we were trying to articulate in Chicago.” He returned home and proposed forming a caucus.

A few months later, Sims met with 35 Chicago teachers interested in doing just that. “There were light bulbs going off,” said Potter. “It was exactly what we needed to jump-start our union.”

The B.C. teachers’ story was an inspiration. “They shut down the city of Vancouver—because they made relationships with parents, communities, and with other unions,” said Karen Lewis, who would later become Chicago Teachers Union president. “[Sims] became the face of resistance to us in Chicago.”

Sims, who’s now a member of parliament in Canada, says she too was “incredibly inspired and excited” by the Chicago teachers and the caucus they formed, CORE. “They wanted to work to make a difference, even on top of teaching.”

She and the BCTF continued to provide guidance in the run-up to the 2012 strike in Chicago, where community support once again made the difference.

The Mexican teachers inspired CORE too. A documentary screened at the conference told about the 2006 uprising in the Mexican state of Oaxaca, where teachers led the city in a revolt against state corruption.

The uprising was led by the radical Sección 22 of the Mexican teachers unions SNTE and CNTE. Teachers had gone on strike to demand improved pay, and improved conditions and support for rural classrooms. The strike evolved into an uprising, with calls for the resignation of Governor Ulises Ruiz Ortiz after he deployed 3,000 police to forcibly remove the striking teachers.

“It was front and center that teachers were putting their lives on the line. Teachers were dying during a popular uprising,” said Potter. The Mexican teachers also talked how about corrupt leaders in their national unions were “undermining the interests of their own membership to secure benefits for themselves.”

He met Maria de la Luz Arriaga, a professor from the Autonomous University of Mexico, who has studied the impact of neoliberal policies on education. “Mariluz was very much open arms when I arrived as a representative of Chicago,” welcoming his group into the coalition, Potter said. She stressed how attacks on teachers and their unions, gutting of school funding, and standardization were all part of a global strategy to increase corporate power.

The two unions formed a connection that has remained strong. The CTU even sent a delegation to Mexico City in 2013 to join Mexican teachers in protesting the draconian education reforms of President Enrique Peña Nieto. Sección 22 led that protest, too.

Nancy Serrano, one of the founders of CTU’s Latino Caucus, was among the delegates. “I went to Mexico thinking this was a Mexican struggle,” she said. “But I left firmly believing this was an international struggle. There are so many commonalities.”

One common theme is using public money intended for education to enrich businesses instead. As Lewis puts it: “We are struggling against injustice that chooses who is worthy and unworthy of a quality education.”

The relationships with the B.C. and Oaxacan teachers are helping to fuel “the emergence of the CTU as a social movement,” says Lipman.

All three unions have relied on deep community ties to challenge anti-teacher and anti-student changes. The political strategies they’ve formed are grounded in “an understanding of what is going on,” Potter says, and “an understanding of how people are capable of solving problems.”

In the U.S., the Chicago example has inspired dozens of teacher unions and caucuses to take up versions of its approach. A national network has formed to share information and strategies. And after a setback, a coalition including PEAC activists recently won back leadership of the L.A. teachers union.

Meanwhile, the Tri-National Coalition itself is expanding, with delegates from Puerto Rico, Chile, Ecuador, and Japan. This year the teachers of Chicago hosted the coalition’s conference. And after that, a tri-national student coalition formed too.

The unions continue to reinforce each other. “The Chicago Teachers Union was built back up from the bottom,” said Jim Iker, current president of the BCTF. “We in British Columbia are inspired.”

Jeff Abbott is an independent journalist currently based in Guatemala. He has covered human rights, social moments and issues related to education, immigration, and land in the United States, Mexico, and Guatemala. Follow him on Twitter @palabrasdeabajo.

To learn more about how Chicago teachers transformed their union from the bottom up, and what they learned from the B.C. teachers, read Labor Notes’ new book, How to Jump-Start Your Union: Lessons from the Chicago Teachers.