“Them That’s Got Are Them That Gets”: Piketty’s Lessons for Activists 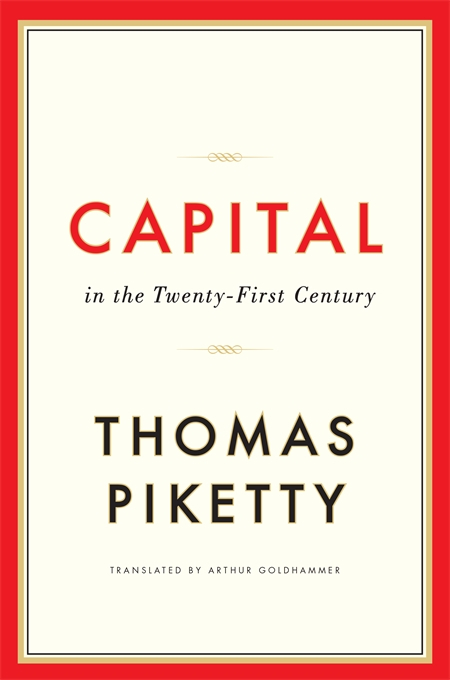 Economist Thomas Piketty's Capital in the Twenty-First Century (Belknap Press, 2014) offers plenty of ammunition activists can use to expose inequality's scope and force. But don't look to him for solutions.

By now perhaps you’ve heard the fuss about French economist Thomas Piketty’s big new book Capital in the Twenty-First Century, but haven’t been able to carve out time to read it.

Waiting for a movie version? It could be a long time coming (more on that below). In the meantime here are some critical takeaways, and omissions, for labor activists.

Inequality is bad now and getting worse: that much working people already know. But Piketty’s exhaustive data—with assistance from Occupy Wall Street—have obliged the rest of the world to take notice.

Nearly half of all income generated in the U.S. now goes to households in the top 10%. The richest 1% claims almost a quarter.

Piketty’s figures on wealth (income plus assets like real estate and stocks) are even more extreme: the top 10% controls 70 percent of the nation’s wealth. At the very pinnacle, the most affluent 1% owns over one-third of all there is to possess.

But if his book examined only our recent crisis, mainstream economists would insist (as they always do) that prosperity for everyone is just around the corner, only a market correction away.

What makes Piketty so difficult to shake off is his conclusion, backed by a trove of international data going back centuries, that in capitalist societies, ever-widening levels of inequality are the norm, not the exception.

Over the long haul, in good times and bad, privileged households with capital to invest have seen their assets increase in value, at rates far greater than overall economic growth.

So wealth compounds and concentrates in fewer hands, producing a growing chasm between rich and poor. Societies are dominated by elites, living large off inherited fortunes. It’s the statistical validation of Ray Charles’ observation that “them that’s got are them that gets…If ya gotta have somethin’ before you can get somethin’, how do ya get your first is still a mystery to me.”

So why are we still paddling along with the “experts” who insist that a rising tide lifts all boats? In part, Piketty argues, because the 20th century experienced a series of extraordinary “shocks”—two World Wars and the Great Depression—that temporarily altered capitalism’s course.

These events rebooted the economies of the Western world. Much dynastic wealth was wiped out. Redistributive public policies were ushered in. Economic growth (what benefits the entire population) was unusually high, while the return on capital (what behooves the wealthy) was uncommonly low.

So, for the first time in history, relative living standards for working people rose for a sustained period of time.

Influential American economists, during the Cold War in particular, took a look around and proclaimed it a self-evident truth that unfettered capitalism would allow everybody to live happily ever after. Public policy, from both political parties, from then on was guided by this presumption.

Just one problem, as Piketty notes: this view rests on an “excessive fondness for fairy tales” rather than long-view realities.

In fact, before the 20th century ended, capitalism began looking like its old self. Since the late 1970s the top 10% has swallowed up three-quarters of America’s economic growth, while the bottom 90% saw real incomes budge barely at all.

Fueled in large part by top management’s multi-million dollar salaries, income inequality in the U.S. is as bad now as it has ever been in our history—and if nothing changes, Piketty maintains, it can only get worse.

So what’s good in all this bad news? For labor activists, there’s much ammunition in Piketty’s book. His painstaking analysis makes clear that the free market, low-tax, deregulated economy we’ve been trapped in for decades has been merely a boondoggle for the wealthy.

He exposes the primacy of inherited wealth, demolishing the fiction that privilege is earned through hard work. He focuses on outsized executive compensation, emphasizing that such greed isn’t only unseemly—it’s destabilizing to our democracy.

But when it comes to how we might turn this all around, you won’t find any role for the labor movement.

Despite what you may have heard on Fox News, Piketty is no Marxist; he's concerned not with how inequality is created but in describing it once it exists. He avoids any class-based assessment of the relationships between workers and the owners of capital. He looks at how inequality is manifested through a maldistribution of income, but not of power.

It follows that Piketty’s solution to the yawning chasm between the haves and have-nots is a global tax on wealth—a top-down, wonkish prescription aimed at readjusting inequalities that have already been generated.

He’s a little vague about how this might be enacted. “Access to better data,” Piketty offers, “can influence political debate and perhaps push the process in a direction more favorable to the general interest.”

Well, maybe. But as a historian, I’m hard-pressed to think of an instance when “access to better data” brought about significant social change.

A different answer can be found in Piketty’s first chapter, when a recent South African miners’ strike and the 1886 Haymarket “riot” in Chicago get fleeting mentions.

These are about the only references to popular movements we get. So when Piketty examines the exceptionally egalitarian 20th century, he focuses largely on leveling effects brought about by the destruction of wealth. He acknowledges that public policies were also crucial, but provides scant detail about what they entailed or how they came to be adopted.

But think about the achievements from the last century that boosted living standards for the American working class: the progressive income tax, minimum wage and maximum hours laws, public education, civil rights legislation, unemployment compensation, and Social Security, for starters.

These were not gifts from on high, but hard-fought gains—secured through struggle waged, often over generations, from below. They were concessions wrested from the privileged by ordinary Americans whose power came through solidarity.

The essential victory was the right to organize. That’s what propelled the unprecedented wage and benefit gains of the post-World War II era, affording working people in vast numbers their first semblance of financial security.

When workers bargain collectively, they can affect the distribution of wealth at its source. That’s more effective than attempting to recoup what they’re entitled to once it’s already in the boss’s pocket and out the door.

It’s no mere coincidence that what Piketty calls the “explosion” of inequality in the U.S. since 1980 coincided with the destruction of organized labor. The first required the second.

That’s why a movie version is doubtful. The book doesn’t depict how ordinary people act in concert to improve their circumstances. No actors, no film.

Too bad. Haymarket anarchist August Spies, for one, could have been worked in. “The ground is on fire upon which you stand,” Spies told the industrialists who’d engineered his death sentence. “Here you will tread upon a spark, but there, and there, and behind you and in front of you, and everywhere, flames will blaze up. It is a subterranean fire. You cannot put it out.”

So by all means read Capital in the 21st Century, and invoke its powerful statistics on inequality. (You can see them all here, or in a condensed version here.) But when you’re talking solutions, let the pundits parse the data. Stay focused on power instead.

The most straightforward means to a more equal society is a vigorous labor movement. Piketty fails to note that the Haymarket affair was connected to a general strike, involving hundreds of thousands of workers across the country, for the eight-hour day.

We need a flame like that to blaze up again.

Toni Gilpin is an educator and labor historian, and co-author of On Strike for Respect: The Clerical and Technical Workers’ Strike at Yale University, 1984-85.

Related
Soak the Rich, Now More Than Ever »
Economics Brief: The Rise in Income Inequality in the United States »
Overturning Austerity 101: California’s Prop 15 Will Tax the Rich »
Not Simply a ‘Natural Disaster’ »
Bus Drivers Strike Reveals Inequality on Martha’s Vineyard »

Toni Gilpin wrote an excellent review and analysis of Piketty's book. But I would spin the conclusion somewhat differently. I expect an academic economist to provide useful arguments and data for the workers' movement to use, and NOT to propose an operative plan.

Thomas Piketty's book on inequality has gotten lots of press, but apparently the man is really writing from a liberal perspective rather than a pro-worker one. He doesn't like income inequality, but as Toni Gilpin says, he is clueless about what to do about it.