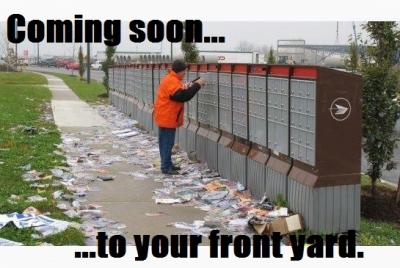 Letter carriers in the U.S. and Canada are battling to save door-to-door mail delivery. Switching to "cluster boxes" like those pictured above, they say, would generate heaps of litter, increase mail theft, and eliminate tens of thousands of jobs. Plus, daily check-ins at the door are a safety boon for many seniors. Image: Mike Palecek.

Despite telling local KATU news that it’s “just an idea… we’re not really pushing for it... it’s just a discussion… they’re just talking about it in Congress,” the Portland, Oregon, district of the U.S. Postal Service is soliciting property owners and managers to convert from at-the-door mail delivery to at-the-corner—a “cluster box.”

So Oregon’s Letter Carriers union (NALC) is encouraging its local branches to inform business and residential customers about the dangers of ditching door delivery.

One example was Royal Villa, a 55-and-over retirement community with about 250 door-to-door deliveries. “Postal management solicited the property managing firm and offered to install cluster boxes free of charge and maintain them at no cost,” said NALC Branch 82 President Jim Falvey.

A local mail carrier found out through a manager’s slip of the tongue and alerted the union president. Falvey was incensed that residents of Royal Villa, many of whom are elderly or frail, would be forced to walk some distance in the wind, rain, snow, and ice to retrieve their mail. Of course, he was also angered that letter carrier work would be reduced and jobs eliminated.

Postal managers do not have to ask or even inform residents that such a “conversion” is going to occur, if they get the cooperation of the manager or owner of the property.

Falvey contacted Royal Villa’s property manager and convinced her to refuse the Postal Service’s offer. If she hadn’t agreed, he was ready to knock on doors throughout Royal Villa.

Both locally and nationally, the union is mobilizing to fight cluster box conversions. Fortunately, postal regulations require that property owners, “owners’ associations,” or “managers” approve the conversion in writing. Unfortunately, the Postal Service can insist that any new housing, where delivery has not been established, can be forced to receive its mail at a cluster box.

Already, two-thirds of deliveries are either to cluster boxes or to curbside single boxes. One-third are still at-the-door—and if those all went to cluster boxes, it would eliminate 80,000 mail carrier jobs. According to a recently released Government Accountability Office report, such conversions could save the Postal Service up to 55 percent in wages per delivery.

Postmaster General Patrick Donahoe, President Obama, and committees in the House and Senate are all proposing legislation to allow this service cut without getting each property owner’s permission. The alleged postal financial crisis they use to justify it was created by Congress itself, through a 2006 mandate to prefund retiree benefits 75 years ahead. Without this mandate, the Postal Service would be profitable.

What’s wrong with cluster boxes? For one thing, at-the-door delivery is obviously a more convenient way to get your, or your business’s, packages and mail dropped off and picked up. But there are less obvious benefits, too. The Oregon Letter Carriers’ convention pointed out that direct contact with residential customers “protects the health and welfare of neighborhoods, especially looking in on the frail and seniors.”

The union also noted that “cluster box mail receptacles are less secure than at-the-door and are more often targets for mail thieves” and that “mail is more likely to accumulate day-to-day and more likely to be dropped on the ground, leading to litter problems.” You can see a snapshot of that kind of litter problem above, from Canadian postal workers facing a similar threat.

Active letter carriers “must not engage in campaigns for or against changes in mail service,” according to postal regulations. However, their unions, retirees, and community allies are not so restricted. Taking a tip from the Canadians, local unions plan to contact media and elected officials for support.

Jamie Partridge is a retired letter carrier and an organizer with Communities and Postal Workers United.