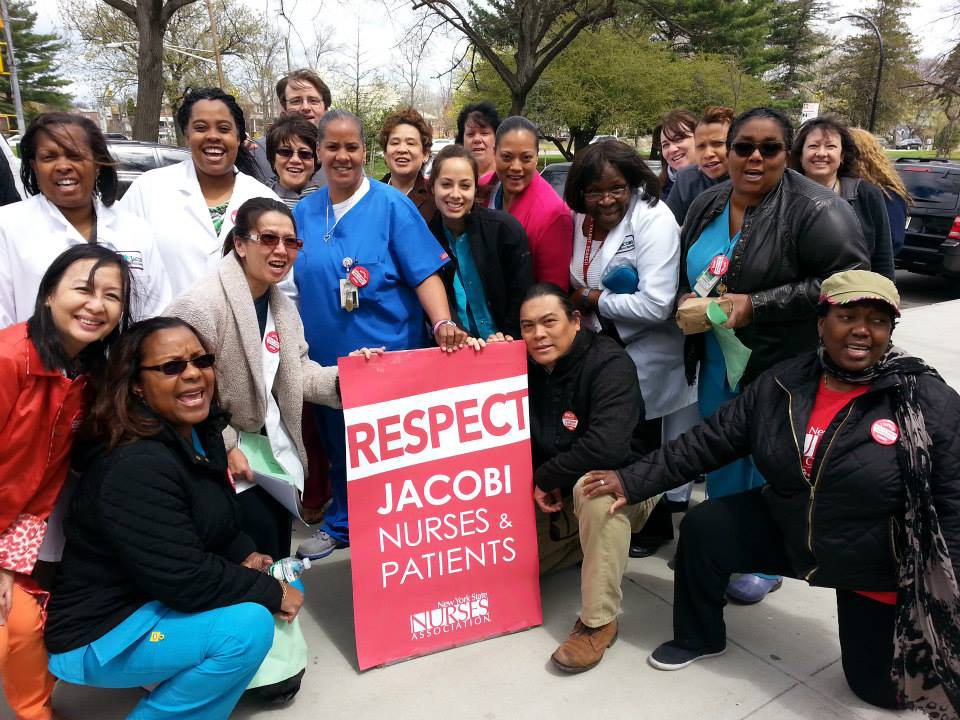 Hundreds of nurses at 10 New York public hospitals held speak-outs yesterday demanding a contract that will protect their patients. Their goal was to turn up the temperature on city officials the union is now bargaining with. Photo: NYSNA.

Imagine every single municipal worker in New York City—more than 300,000 of us, in 152 unions—negotiating our contracts simultaneously, against one boss.

Every single public service only a phone call away from being shut down. An entire city intimately connected to negotiations through family members, friends, and the services we rely on. It’s a mayor’s worst nightmare, and a union’s dream.

In theory, yes, but in practice, no. Rather than harnessing our collective power, most public sector union leaders in New York City are bargaining behind closed doors, fighting alone, and keeping members in the dark.

On paper, all the city’s union leaders are saying the same thing: their members want and deserve retroactive pay for the several years our wages have been frozen because of expired contracts. Though the city wants big health care concessions in exchange for retro pay, so far no union leaders have put givebacks on the table.

However, the union who settles its contract first will set the pattern for the rest—and New York’s unions have been on the defensive for decades, not only from employers but also from each other. Rank-and-file workers have been carrying the burden through frozen pay and increased costs for pensions and health, as the cost of living steadily rises.

The coalition organized a March 6 forum where 75 rank-and-file employees gathered to discuss how to organize—not only for fair retroactive raises, but also for better public services for New Yorkers.

When Mayor Bill de Blasio came into office in January, every municipal employee in New York was working under an expired contract. (Expiration dates varied; the teachers’ contract has been expired since 2009.) The biggest groups are educators in the UFT, various city workers in DC 37, and public hospital employees in Service Employees (SEIU) 1199 and NYSNA.

In addition to unions that negotiate with the mayor directly, other city-based public sector workers who technically bargain with state-funded agencies—such as the City University of New York (PSC) and the Municipal Transit Authority (TWU Local 100)—are also working under expired contracts (last week TWU reached a tentative agreement).

This is the first time this alignment has happened in New York City in more than 40 years.

Ideally, unions strategize and organize for years to have their contracts expire simultaneously, in order to negotiate with the united power of hundreds of thousands. We could take advantage of this accidental timing to fight for the good of all members and for city services.

The teachers union—the largest local in the city, representing more than 100,000 members—is paving the way in negotiations by demanding the same 4 percent raises that other unions received in 2009 and 2010, before their contracts expired.

The teachers are asking for this retro pay to date from November 1, 2009, when the UFT contract expired, through October 31, 2011. However, if they do win two years of retroactive pay, they may in return accept smaller raises going forward—which could set a precedent for smaller raises for other unions who follow. The mayor is reportedly seeking a nine-year contract with the teachers—to stretch from 2009 till after the next mayoral election.

“Most likely the UFT settles first and they can easily settle to get retroactive pay for the first few years,” since other city unions were still getting raises then, explained Peter Lamphere, a member of the Movement of Rank and File Educators (MORE) caucus in the UFT. But “I worry that the UFT could set a really weak pattern for the next set of unions who settle contracts with the new mayor.

“How would union members working in the same school building feel if the teachers walked away from negotiations with as much as a $20,000 to 25,000 check for some while the custodians walked away with nothing?”

Of course, it’s problematic that leaders are sitting back and waiting to see what another union gets, rather than organizing together.

After de Blasio was elected, members from Public Workers United collected more than 1,000 worker signatures on a petition demanding that the mayor negotiate full retroactive raises for all city workers and grant new raises in line with the increased cost of living.

The petition also demanded that the Municipal Labor Committee, the coalition of unions representing municipal workers, take a unified position making these demands. The Committee still hasn’t done this.

Lamphere believes “it will take serious membership mobilization on the part of municipal unions that goes beyond the sort of spring rallies that folks have done in the past for years.” He suggests “a united march, where large numbers of rank-and-file unionists actually took over the streets in a way that hasn’t happened since Occupy Wall Street.” The PWU is organizing a contingent at a May Day rally to put forward contract demands, together with demands for immigrant rights and for better services.

Union strategists often don’t pay enough attention to the advantages of organizing in the public sector.

Everyone wants great schools, quality patient care, and efficient public transportation. That’s the common bond that unites workers and community members. In fact, one way union members are connected to one another is that we use one another’s services.

In this era of austerity, making gains in any contract is not easy. Unions don’t just need unity among our own members—we also need coalitions with other workers and community members. To build those coalitions, union leaders have to put forth a more inspiring, big-picture vision—not only bread-and-butter contract issues such as retroactive pay, but also quality public services.

Especially in such a union-dense city as New York, we have the opportunity to work locally and build a grassroots base. For instance, workers from different unions, in the same neighborhood, could work together to influence their local city council members.

Our joint demands could include smaller class sizes in schools, safe staffing ratios for nurses and hospital employees, increased funding for City University of New York colleges, an increase in the minimum wage, and a decrease in transit fares. NYSNA, for example, is already pushing for safe staffing in its negotiations.

By organizing from the bottom up, we hope we can make union leaders move from the defensive to the offensive. We have to continue to raise the standards of what we expect—both from our city government and from our unions.

Rosie Frascella is a member of the Movement of Rank and File Educators and the New York Collective of Radical Educators. She teaches English at the International High School at Prospect Heights.