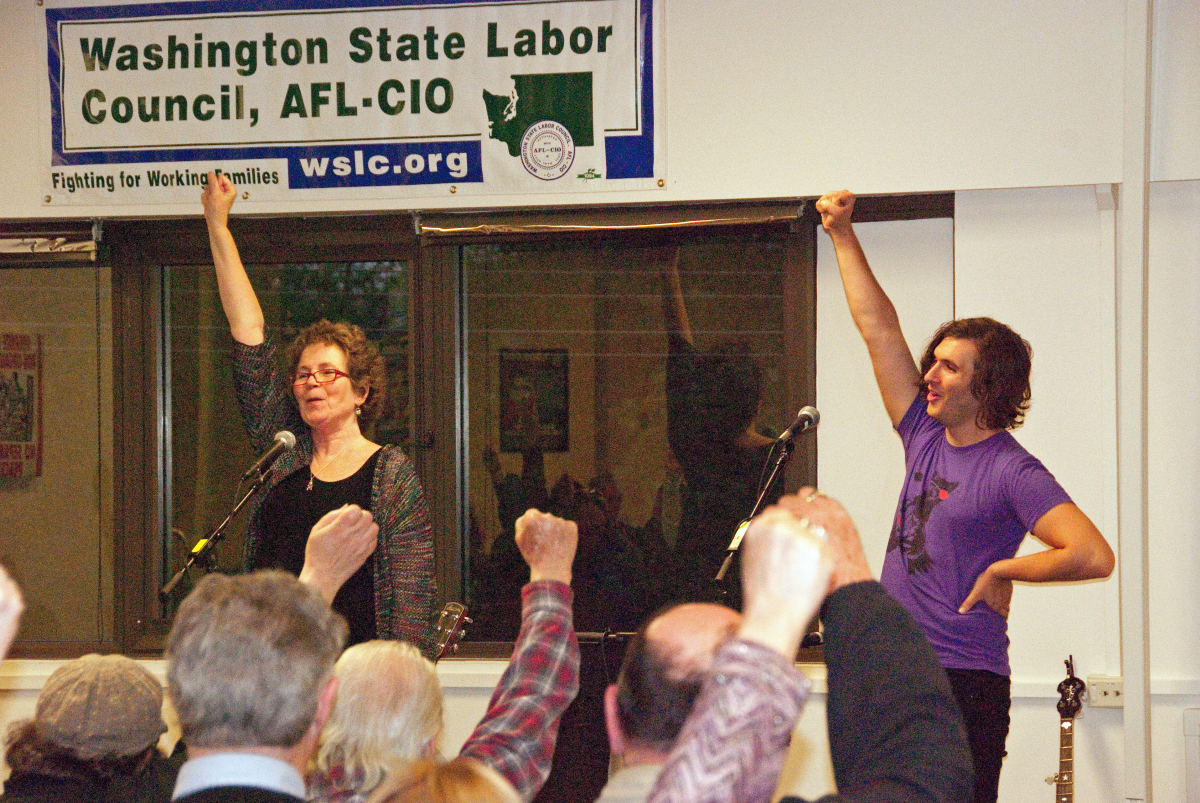 Audiences in Washington state and British Columbia can catch Anne Feeney and Evan Greer on their "Carry it On" tour this month, celebrating the legacy of Pete Seeger. The tour kicked off April 16 in Olympia, Washington. Photo: Daniel Bernstein.

The rabble-rousing spirit of Pete Seeger lives on—and we’re out to prove it.

We’ve both shared stages with Pete, and we’re doing our best to carry on his legacy: harnessing the power of music and making it irresistible for audiences to join in and sing along.

Audiences in Washington state and British Columbia who attend our multi-generational “Carry it On” tour this month will learn to expect the unexpected: high-energy concerts that range from Irish ballads to union sing-alongs to political punk anthems.

The Carry It On tour began April 16 and will culminate at a grand finale on May Day in Tacoma.

You Can Still Catch
Anne Feeney & Evan Greer's ''Carry it On' Tour:

The first time I met Pete Seeger was at a People’s Music Network summer gathering about 10 years ago. I was a bright-eyed radical teenager who had just stolen all of my dad’s Phil Ochs CDs and was ready for revolution, but I was new to the folk scene and was probably the youngest person at the gathering by about 30 years. In terms of looks, I didn’t know Pete Seeger from Frank Sinatra.

At lunchtime on the second day, I saw an older gentleman sitting by himself at an empty table. I remembered him because he had complimented me on a song I’d sung at the open mic the night before, and suggested a simple lyric change that improved the chorus.

I brought my tray and sat across from him. We ate, mostly in silence, for a bit, and then I noticed his very nice-looking banjo on the table. I asked him if I could give it a try, being at a point in my musical life where anything with strings was pretty much irresistible. He warmly handed it across to me, cautioning, “Be careful,” and then turned to chat with some people behind him.

I clumsily plucked the strings while trying to read the writing that encircled the head. There was something familiar about this banjo, like I had seen it somewhere before.

“Wow, lucky you! Pete must have really liked your song,” said an older woman as she walked by.

Lucky me? Pete who? I wondered.

That was when I remembered where I had seen this banjo before. I’m lucky I didn’t drop it the moment I realized what kind of history I held in my hands.

I gave Pete Seeger his banjo back, and we proceeded to chat for quite some time about climate change, transgender liberation, and what makes a song a good sing-along.

After that day, I had the honor to cross paths and share stages with Pete a few other times, and exchange a few letters with him. He was always ahead of his time, pushing the envelope within the movements that supported him.

Pete was a troublemaker through and through, but he made trouble for the ruling class with a degree of compassion and humility that few others achieved. Even on stage in front of thousands of people, Pete managed to make audiences feel like they were in a cozy room full of friends, and Pete was one of them. He never put himself above anyone, and he never stopped organizing.

Pete has set the bar for those seeking to use music as a tool and a weapon in the fight for justice.

In the course of my 36-year friendship with Pete he persuaded me to 1) host the 1989 People’s Music Network Winter Gathering in Pittsburgh, 2) convince the reluctant board of our folksong society to make the theme of the 1992 Smoky City Music Festival the 100th Anniversary of the Homestead Steel Strike, and 3) become more active in the Musicians Union (I ended up being president of my local for an extremely intensive two years).

When I attended Pete’s 90th birthday at Madison Square Garden, I spent a couple hours talking to everyone I bumped into. Every single person I talked to felt that they had such a strong personal connection to Pete that he would have been disappointed if they hadn’t been there. Madison Square Garden has a capacity of 18,200 people.

After the show, I was chatting with friends who had known Pete for decades, and we all started sharing stories of the various things that Pete had put us up to doing. Everyone had an anecdote of a protest or a campaign they had organized, a concert they’d held, a gathering they’d wrangled, or a cause they’d supported because Pete had put the idea in their head and asked them to take action.

Pete touched so many lives with his music and his activism, but when you start adding up all the things that other people did because Pete put them up to it, without a doubt he was one of the most influential people of the 21st century.

Anne Feeney, based in Pittsburgh, is the granddaughter of an intrepid mineworkers’ organizer, who also used music to carry the message of solidarity to working people. Since 1991 Anne has traveled to the frontlines in 42 states, as well as Canada, Mexico, Denmark, Ireland and Sweden. Her anthem “Have You Been to Jail for Justice?” is being performed by activists everywhere, and was recorded twice by Peter, Paul and Mary.

Evan Greer is an LGBTQ parent, organizer, and multi-instrumentalist who writes fearless and dangerously catchy original songs that inspire hope and incite resistance. Equally at home leading singalongs in a union hall or sweating at a basement punk show, Evan has developed a cult following across North America and Europe, and has had songs featured on NPR, in college courses and major independent films.

Tour dates and other upcoming performances are here for Anne and here for Evan.