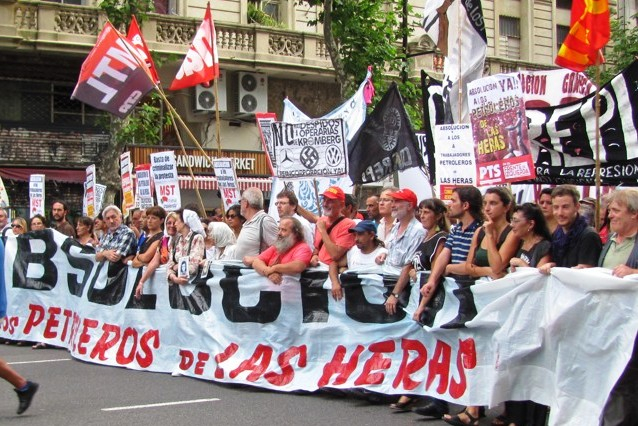 Ten Argentine oil workers have received prison sentences for the death of a police officer during a strike—though the case against them relied on torture and coerced testimony. Workers and supporters marched in protest, calling for their release. “They are being punished in order to intimidate the workers of our country,” said Daniel Ximénez.

The case echoes eerily of the Haymarket martyrs of 1886 in Chicago. Workers were demonstrating, policemen were killed, some innocent workers were singled out for blame.

Argentines are demanding the release of 10 oil workers convicted December 12 of killing a policeman during a protest.

“They are being punished in order to intimidate the workers of our country,” said Daniel Ximénez of the Labor Studies Workshop (Taller de Estudios Laborales) in Buenos Aires. “They were sentenced to severe punishment for a crime they didn’t commit.”

A movement of human rights activists, unionists, university professors and students, cultural workers, political parties, and elected officials from city and state government to congresspersons is calling for the oil workers’ release—saying they were falsely convicted.

Ximénez is among those working to exonerate them. “The most serious thing is that they were convicted in a case constructed by the prosecutors on the basis of torture, threats, and lies—without any evidence,” he said.

The police officer’s death occurred in 2006 during a strike at Las Heras against a new income tax and against outsourcing.

During the weeks-long strike, a union leader was arrested. A thousand co-workers and family members, in a town of 9,000, went to the jail where he was being held to seek his release. The police then attacked those who had come to the jail. In the melee, a police officer was shot and killed.

“The prosecution was never able to present evidence against the accused,” Ximénez said, “but they acknowledged that they had used torture in the interrogations in an attempt to get the evidence they wanted.

“False witnesses were also forced to testify under threat, but they later complained to the judges that their testimony had been coerced and proclaimed the innocence of the accused. For these reasons the initial judgment was annulled, though it was later upheld upon appeal to the provincial government.”

The strike, meanwhile, was defeated. Twelve workers who went to trial spent three years in prison but are out now, on appeal.

“This case is comparable to many of the crimes committed by the military dictatorships we lived through in past years,” said well-known journalist and screenplay writer Oswaldo Bayer. Under the dictatorship that carried out a “dirty war” from 1976 to 1983, at least 30,000 citizens were murdered or disappeared, including unionists.

Bayer also compared the Argentine oil workers to the “martyrs of Chicago”—that is, the seven workers convicted and four hanged for allegedly setting off a bomb in Chicago’s Haymarket Square in 1886. The blast and ensuing gunfire killed seven police officers and at least four civilians. In both cases, no one knows who the real initiator of the violence was.

Hundreds of Argentines, from federal legislators and top union officials to human rights activists and artists, have signed a petition calling for the exoneration of the 10 workers. The movement is seeking international support. To add your name, position or organization name, and city/country to the petition, write to ceprodh[at]gmail[dot]com.

This is the English version:

EXONERATION FOR THE WORKERS OF LAS HERAS

We, the undersigned, repudiate the unjust conviction handed down by the tribunal of Caleta Olivia on December 12, 2013 in the case of nine petroleum workers of Las Heras, Santa Cruz province (Argentina), of whom four were sentenced to life imprisonment—one of them being a minor at the time dealt with under a special legal system; one was condemned to five years in prison on a charge of violent coercion and being an accessory; and finally four were sentenced to five years in prison for coercion.

The workers were condemned without any proof and with grave violations of human rights, for the murder of officer Sayago, which occurred in a town in that area in 2006 when they demonstrated to oppose a tax on earnings and for better working conditions.

We the undersigned demand the exoneration of the workers, given that this conviction was fabricated out of falsehoods.

During the course of the trial and the arguments, the defense attorneys for the petroleum workers, who were constantly threatened and sanctioned by the court, demonstrated the innocence of the workers, against whom no evidence had been brought. The only thing that was demonstrated was the torture, humiliation, and threats suffered by the oil workers at the hands of the provincial police during the three years that the workers were detained, an action more appropriate to a military dictatorship than to a democracy.

We denounce the court that went forward with this trial and then convicted the defendants based on torture. Mr. Candia, one of the prosecutors, acknowledged this, saying that he didn’t consider a blow to the head and a couple of slaps to be torture. We are dealing here with a verdict fabricated in order to convict the workers, plagued with human rights violations, such as the brutal torture to which the victims were subjected during their detention, as well as the constant threats against their families.

Human rights organizations, labor unions, social movements and political parties have denounced the trial and have taken their case to the National Secretary of Human Rights, asking the Secretary to carry out an investigation of the trial.

These harsh verdicts represent one of the gravest attacks on workers who have come out to fight for their rights since 1983 at the end of the military dictatorship. The purpose of this verdict is to make an example of the workers so that workers will not confront the oil companies and the large employers. In this way, it sets a very grave precedent, namely that the courts uphold convictions based on testimony obtained through torture.

The conviction of the workers did not lead to their immediate imprisonment, which cannot be carried out until the sentence is finalized; meanwhile, we will use this time to achieve real justice, which means the exoneration of our comrades. At the beginning of February, the case was appealed, and if that appeal is not successful, the case will be taken to the provincial Supreme Court in the city of Río Gallegos in the Province of Santa Cruz.

Immediate and unconditional exoneration for the petroleum workers of Las Heras.

Those who wish to sign this petition should send their name and organization to either the committee working for exoneration at absoluciontrabajadoreslasheras[at]gmail[dot]com or to tel[at]tel.org[dot]ar.

The complete list of endorsers can be found here.

Dan La Botz is the editor of Mexican Labor News and Analysis.

You can meet Argentinean workers from Buenos Aires at the Labor Notes Conference April 4-6 in Chicago.