Review: The Sham of School Reform 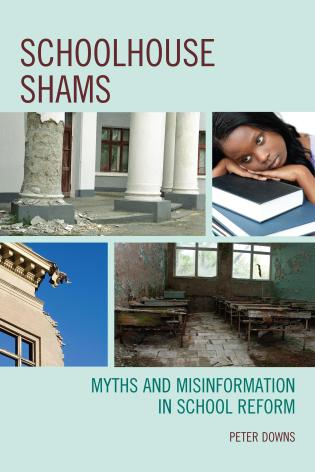 Peter Downs has a perfect resumé to call out the lies and distortions of the so-called school reform movement. He does a thorough job of it in his detailed and comprehensive book, Schoolhouse Shams: Myths and Misinformation in School Reform.

Because Downs is a parent with children in public schools and a citizen who won election to the St. Louis School Board, Schoolhouse Shams has a unique credibility. Downs has no vested interest, other than to improve education for the good of our kids. No one can claim that he’s in the pocket of teachers’ unions (the word “unions” doesn’t even appear in his book), or that he doesn’t understand the vastness of our schools’ problems.

Downs knows firsthand how sound-bites like “choice” and “accountability” don’t begin to capture the complexity of what it takes to properly educate kids. Indeed, Shams points out precisely how complex and widespread the problems facing public education are. But Downs makes one point crystal clear: the so-called school reform movement isn’t helping us to solve these problems. The people pushing the reform agenda are focused on a different goal: privatizing public education.

Downs organizes his book around 10 of the myths or “shams” that drive school reform. Included in his list of falsehoods are “Desegregation Destroyed Our Schools,” “Public Schools Are Too Wasteful,” and of course, “Private Is Better.” Downs isn’t buying any of it.

The “Private Is Better” argument, Downs contends, is the heart of the corporate reform agenda. Between sweetheart contracts to third parties who are paid far more than market value and school boards overestimating costs to school districts, there has been a concerted agenda to make public education seem more expensive than it really is. “The game of inflating the costs of public education,” Downs warns, “has turned out to be less about reform and efficiency than it is about making the argument to turn public services over to private organizations.”

That’s where the rubber meets the road for Downs. Giveaways and sweetheart contracts by elected officials expose the lie that education is “All About the Children.” He actually points out how a very successful magnet school in St. Louis with excellent parent involvement was closed so that the land could be sold to St. Louis University to build a new basketball arena. The land was sold without ever being appraised to make sure the taxpayers were getting market value.

The federal No Child Left Behind Act set a goal that 100 percent of students would be proficient in reading and math by 2014—but never bothered to define what “proficient” meant, Downs points out. NCLB left that up to the states, who have hardly done a specific or consistent job. If we don’t know or haven’t agreed on what “proficient” looks like in our classrooms, what’s the point in trying to assess it?

Downs also does a great job demonstrating how reading and writing are conflated into one subject on many standardized tests. Most are very poor at differentiating between English-proficient students, language learners, and students with learning disabilities, as many state tests do not differentiate for students’ disabilities, and most language learners are required to take the exact same state tests as students who are English-proficient.

Perhaps most important, Downs addresses motivation—“something,” as he points out, “that experienced teachers and principals know a lot about.” Most standardized tests have no impact on kids’ graduation or grades, so they have little or no reason to care about them. Many students simply don’t really try to do well on state tests, because the tests don’t matter to them and have no impact on their lives. Because of this, test results for many schools—especially in the inner city—do not accurately reflect how well the students are capable of performing.

One omission in Shams, because it was published a year ago, is the Common Core State Standards—a national project to standardize teaching and testing in all public schools. Common Core has been adopted by 45 states so far and purports to address many of the concerns with testing that Downs discusses. Scholars like Diane Ravitch are already on record about the disconcerting aspects of Common Core—not the least of which is lack of significant teacher input or trial runs in the classroom.

Shopping Is the Answer

Pro-business groups like the Milton Friedman Foundation and Broad Foundation have endorsed school choice as a major gateway to reform. Political consultant Dick Morris compares shopping for a school to buying a car.

But Downs reminds us that public education was not designed as a for-profit enterprise, so imposing a capitalist, choice model on education is not even economically tenable in many areas.

And even in areas where one would argue there isn’t a natural monopoly—cities—choice has not produced the success and equity that the free-market reformers promise. Downs reminds us that the charter schools that have sprung up in urban areas often choose fewer students with disabilities and fewer with discipline and emotional problems—children whom public schools are bound to accept. This forces the neighboring public schools to continue to meet the needs of these kids, but with reduced public funding because their enrollment has left for charter schools.

And even while charter schools cherry-pick students who are less expensive to educate, and more likely to succeed, Downs points out, this explosion of choice in urban areas has not resulted in major academic gains. He cites the 2009 Stanford CREDO Study, which concluded that on average, the majority of charter schools did not outperform their public school counterparts. In fact, CREDO found charter schools were “twice as likely to be ‘significantly worse’ than their public school competitors as they were to be better.”

Schoolhouse Shams is a wide-ranging exposé that shows why a neoliberal pro-business response to schools’ problems is actually making them worse. Downs joins a growing chorus calling out the self-styled reformers for their lies and deceptions.

It would have been nice to read a chapter where Downs addressed the clear attack on organized labor that is at the heart of the education reform push. The reformers aim to sacrifice experienced classroom teachers for cost control and increased employer power.

But the omission might ultimately be a good thing. Downs makes it clear that his true agenda, unlike that of those on the other side, is simply a quality education for our kids. By not mentioning teachers unions, while pointing out the very same injustices and fighting for the same results that teachers’ unions are, he just might convince readers that we really are all on the same side.

Joseph Zeccola is an English teacher and social justice educator in Los Angeles and a member of United Teachers Los Angeles. For the piece he says is missing from Downs’ book—an analysis of the attack on organized labor that’s at the heart of corporate ed reform—look for the forthcoming Labor Notes book, How to Jump-Start Your Union: Lessons from the Chicago Teachers.