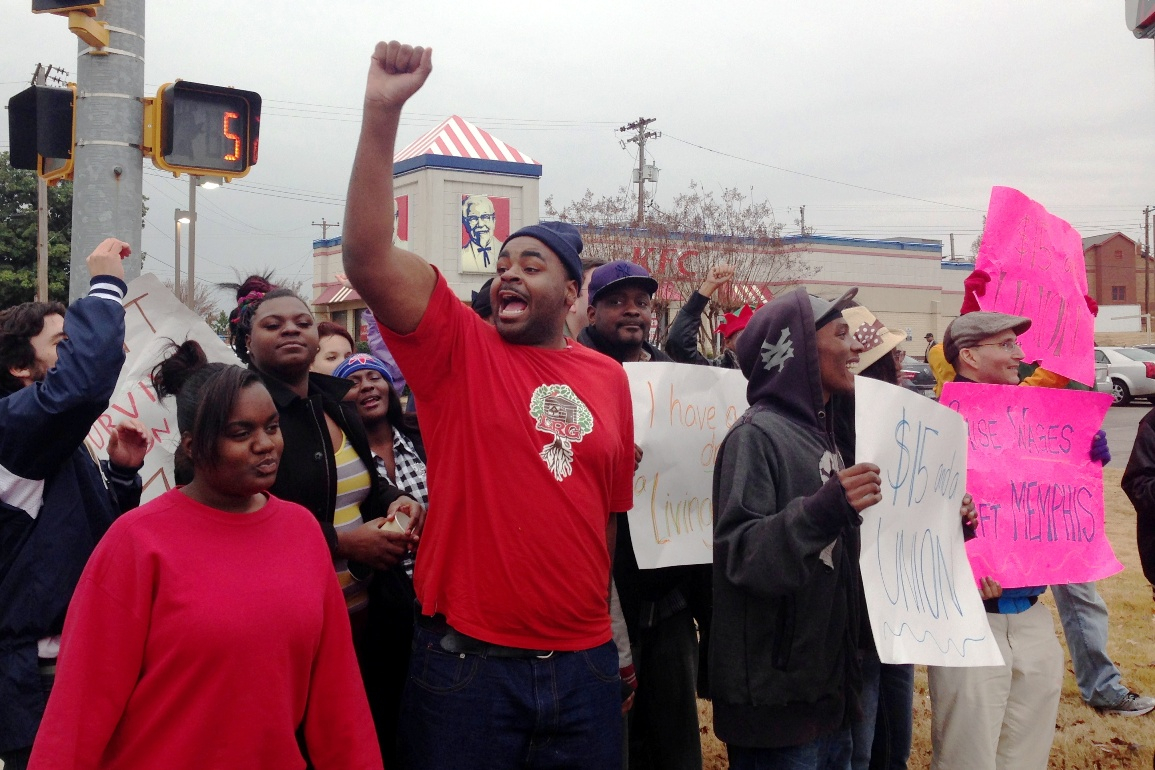 Fast food strikers walked out in 100 cities December 5, and supporters rallied at restaurants in an additional 100 towns. Photo: Steve Payne.

“In the last strike, they were asking ‘where is Antonio?’ and then they heard me out on the bullhorn.”

In yesterday’s strike, McDonald’s managers were unlikely to be wondering where Antonio Cathey was—considering the outspoken organizing he and his co-workers have done over the last few months.

Cathey was one of six who went on strike at the McDonald’s on Union Avenue in Memphis, Tennessee, last August.

Since then, he and other fast food workers have been making phone calls, visiting stores, and convincing other workers to stand up again.

Twice as many workers at twice as many stores struck in Memphis yesterday, along with fast food workers in 100 cities around the country.

After the last strike, McDonald’s worker Daisha Mims filed an unfair labor practice charge; her managers had verbally harassed her. Someone visited from corporate, and Mims won a 25-cent raise.

AJ Faulkner, who works at a Krystal Burger, is also preparing a ULP charge: his hours were cut.

A new manager came to his store after the last strike. He began cutting Faulkner’s hours when he heard he’d been organizing his co-workers.

Faulkner only got six hours last week. Since the cuts, he’s been evicted from his home because he couldn’t make rent.

But that didn’t slow him down. He figures the manager is trying to get him to quit, but says he’s not going to—he wants to stay and keep fighting. In fact, he just organized his two new roommates, who work at Wendy’s, to join the strike.

“These are the jobs available now,” Faulkner said. “We work harder than most people sitting behind a desk pressing buttons and I feel like we deserve more.”

A small, energetic group of strikers and community supporters sang in the cold rain outside the Union Avenue McDonald’s yesterday. They huddled under umbrellas and wore garbage bags to stay dry.

All day they went from one fast food restaurant to another, rallying outside and occasionally taking over the lobbies inside. Yells of “turn it up!” punctuated the chants of “we can’t survive on $7.25.”

Strikers danced, sang rap songs, and turned the chants into music. They were eager to block drive-thrus and take over lobbies, and they took constant pictures, sending them to friends and co-workers.

On van rides between stores, provided by the Service Employees union (SEIU), they called in to 107.1, a Memphis hip-hop station, which interviewed the workers and fielded supportive calls from listeners.

The overwhelmingly black workforce in Memphis fast food is well aware of the connections between their struggle today and the historic struggle of black people here. This is the city where Dr. Martin Luther King was killed supporting a sanitation workers’ strike in 1968.

Strikers held signs that read, “I Have a Dream of a Living Wage.”

The drive-thrus remained busy, and customers stood in line in the stores. But the strike was covered by every TV station, some more than once, and by most major radio stations. Passersby shouted their support and honked, or brought the strikers coffee.

The day ended with strikers speaking to a small crowd. “I’m 24, I’m a single mother of three. I had to depend on donations...for clothes for my kids,” Mims said. “I do work. I also rely on government assistance.

“It’s not something I’m ashamed of. But why should I have to do that if I’m working? If they paid me more money I wouldn’t have to.”

Steve Payne was an organizer with SEIU in Minneapolis for eight years. He now lives in Memphis.