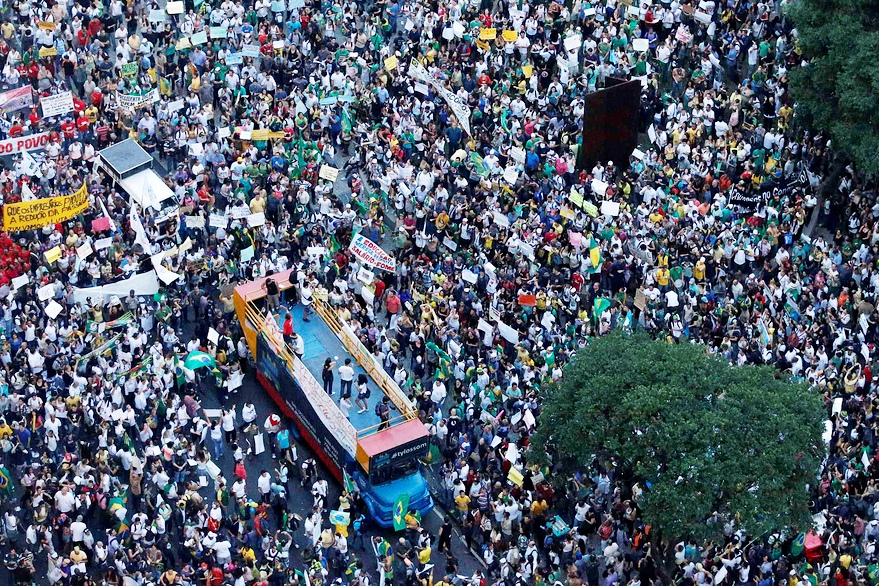 Some 2 million people participated in demonstrations all over Brazil in June, and won lowered bus fares. Further protests are brewing over the spending of public dollars on the World Cup and Olympics instead of on needed hospitals and schools. Meanwhile a series of strikes won aerospace workers a raise. Photo: Semilla Luz.

Imagine if a union meeting was held in front of your workplace right before work—perfectly legal under American law. Let’s say 70 percent participated and you all decided to go in five minutes late.

It must have started something like this in Brazil years ago. Now unions call plant gate meetings, and at starting time, most workers don’t go in. They go in when the meeting is over, and no discipline happens to anyone. If negotiations are going on and going badly, a vote may be taken not to go in at all that day!

I’m in Sao Jose dos Campos—an hour east of Sao Paulo on the way to Rio—which is home to Embraer, third largest aerospace company in the world, and to a GM plant with 6,000 workers. (I worked at GM in Detroit and then a GM supplier for 33 years.)

The union at the plants here, CPS-Conlutas, represents metalworkers in the region and was attempting to negotiate a pattern contract for these workers, as it has in the past. The goal was an 8 percent raise; 6 percent of that is to make up for inflation. They negotiate every year.

GM had settled—but Embraer, with 13,000 aerospace workers, was the holdout. At a workers’ assembly, they voted to strike for four hours. The company still refused to bargain.

The following week they struck for 24 hours, after another vote at a plant gate meeting. Still nothing changed, so the union went to court. The court said the company should negotiate because all the other main companies had settled for 8 percent. This decision, however, was not binding, and Embraer continued to refuse to come to the table.

A worker’s assembly voted to strike again for 24 hours. This time participation was 90 percent, better than in any such strike in 20 years. Finally Embraer gave in and workers voted to accept the offer of 8 percent.

During the first four-hour strike, a delegation from the Machinists union in Kansas was there for a visit organized by CSP-Conlutas.

It was a coincidence that they were there during the strike, but they were very impressed by the unity and the participation. Outsourcing has hurt them badly, as Boeing has sold plants and moved work, including to Japan. They had become convinced that international union connections are needed to stop the companies from playing workers off against each other.

An Embraer delegation has been invited to come to Kansas to speak with workers there. And CSP-Conlutas is hoping to send a delegation of 10 workers to the 2014 Labor Notes Conference in Chicago in April.

When Labor Notes published an article on the Seattle Boeing workers voting no on a union-busting contract, Embraer workers were interested, translating it immediately. They had thought Embraer was hard-nosed! They were angry to see Boeing, the number one aerospace company in the world, threaten workers in Seattle as it did. They want Boeing workers to know they fully support their fight to keep their work, against company bullying tactics.

Brazil’s labor laws are better than ours. Unions are allowed everywhere and workers vote by region and sector (such as postal workers, metalworkers, transportation workers, oil workers, etc.) on which union will represent them. Unions can function in any workplace where any workers are willing to join the union that won the election.

There is no election workplace by workplace, which helps keep management from whipsawing one workplace against another.

You may remember hearing that 2 million people in Brazil participated in demonstrations all over the country in June. Brazil is the third-largest country in the Americas, with a lot of undeveloped land and poorly developed roads, so communication between different areas is difficult. This makes coordinated national demonstrations all the more impressive.

The issue that started the marches was bus fares. They won, and bus fares were lowered everywhere. (Since I am 65, I ride the bus for free!) Yet there was more to it than that.

There is a lot of unhappiness about taxes being used to build big stadiums and infrastructure for the World Cup in 2014 and then the Olympics in 2016, instead of building the hospitals and schools that are needed. The assignment of construction contracts was widely seen to be rife with corruption.

Anger intensified recently when two construction workers were killed in the building of a stadium, due to management negligence. Demonstrations were held at the funerals. More protests are likely.

Related
In a Surprise, John Deere Workers Get to See Contract Before Voting On It »
Auto Workers to Vote on Direct Elections for Officers »
Ohio Auto Parts Workers Strike to Unionize »
Opening the Door to a More Democratic UAW »
General Motors Returns to Oshawa—But Offers Only Second-Tier Jobs in a ‘Pop-Up’ Plant »