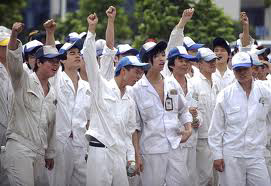 More than 30 years since China opened up to foreign investment, wildcat strikes surge month after month. They are driven by workers with no meaningful access to union representation, to a worker center, to the media, to legal mechanisms, or to government intervention on their behalf. And yet workers in industries from electronics to health care continue to strike, impelled by wages as low as $2 an hour.

This raw resistance has generally gotten employers to give in to strikers’ economic demands. The typical wage is minimum wage, but overtime and the mandatory social insurances are often not properly paid, so workers’ demands are frequently just to get their legal due, which employers can easily meet.

Local governments sometimes pressure employers to settle disputes but may also repress and criminalize worker activists. In recent years, the central government has made a determined effort to contain labor relations within a legal framework. The most recent example is draft “Guangdong Province Collective Negotiations Regulations” released in September.

Guangdong Province is the beating heart of China’s industrial economy, the seat of sweatshop production of exports from electronics to pharmaceuticals. Situated just north of Hong Kong, Guangdong has long been China’s portal to the outside world—and therefore the region where experimentation is somewhat more tolerated.

The draft—currently delayed due to high levels of public interest and critique and concerted resistance by the Hong Kong business community—reflects the push from below for worker voice.

China has been constructing a legal framework for labor relations since the early 1990s, when mercenary capitalism was allowed free rein and labor strife erupted. The Trade Union Law of 1994, for example, included guidance for “collective consultation” between management and the official, government-affiliated union—the only legal union in China.

But with local union leaders nearly always appointed by—and from—management, and with no meaningful channel for worker participation, the results have been predictable: where a collective contract exists at all, it merely codifies the legal minimums on wages, overtime, and social insurance. And even these minimums must still frequently be won by non-authorized strikes and struggle.

The passage of several labor laws on individual contract rights, dispute resolution, and employment discrimination in 2008 briefly raised hopes. The Labor Contract Law aimed to stabilize employment by requiring long-term contracts for most categories of workers.

Not surprisingly, employers subverted the law’s intention by shedding permanent employees and ramping up casualization through subcontracting, use of dispatch labor agencies, and a massive increase of student interns procured through vocational high schools. Since 2008, the expansion of this non-standard labor has been spectacular and unrelenting.

With the government’s failure to enforce labor law on one side, and employers’ nimble and calculated strategies to elude regulation on the other, confidence in the “rule of law” has dwindled rapidly, especially among workers and their allies. By contrast, strikes continue to achieve wins.

This can be seen most clearly in the effects of the 2010 auto strike wave in Guangdong, which spread from a Nanhai Honda plant to hundreds of factories and shuttered all Honda production on the mainland for nearly two weeks. This strike wave drove reforms, including direct, democratic election of shop floor workers (most notably, migrant workers) into factory-level union leadership throughout the industrial zone where hundreds of auto plants are sited.

In turn, owing to enlightened support from reform-minded union leaders at the municipal and Guangdong provincial level (perhaps the only such union leaders in the country), these new worker-leaders have forced their employers into actual collective bargaining relations, resulting in rising wages and a dramatic stabilization of the workforce.

Though nearly unique, probably not repeatable, and still fragile, an unmistakable shift in the balance of power between owners and workers in one industry in one province has occurred. The collective action of workers has, in effect, brought about “labor regulations from below.”

Against this background, and in hopes of lessening worker unrest through gradual wage increases, the Guangdong provincial government seems to be trying to consolidate the lessons of this period. The draft regulations now under discussion can be seen as a government-directed strategy to incorporate worker voice, to reinforce the dominance and monopoly of the official union, or to legitimize negotiation as preferable to either strikes by workers or dictatorship by employers.

These potentially contradictory goals have led critics and advocates alike to scrutinize the draft regulations closely. For workers, there are clear gains:
• the laying out of procedures for requesting and conducting collective bargaining
• the possibility of electing worker representatives to bargaining committees
• the possibility of replacing union leaders through a “no confidence” vote
• ways for workers to have input into bargaining proposals and review results
• super-seniority for union representatives
• protection against unfair labor practices
• employers’ duty to disclose financial information in the course of negotiations (a provision which is making employers particularly restive).

On the other hand, the draft contains starkly terrifying implications of criminal prosecution of workers in cases of labor disruption, and a vast imbalance of the punishments proposed for workers and employers charged with violating the law.

Article 31 of the draft prohibits strikes and slowdowns during the period of negotiations. Leaving aside for a moment that the “period of negotiations” could conceivably stretch to over 200 days, the mention of strikes at all is stunning. The right to strike is neither permitted nor prohibited in Chinese law, and receives no explicit mention (bar one controversial clause in the Trade Union Law) in current labor law.

Therefore, the raising of strikes in the context of prohibiting them alarms labor advocates about the use of this precedent to further restrict and criminalize worker resistance.

For worker activists, the new regulations pose stark questions: Will “rule of law” be wielded exclusively to control workers, or can it be a tool that workers use themselves? And what do such legal reforms mean to the vast army of informal and precarious workers who have no effective voice through a union and for whom the law seems very far away?

Ellen David Friedman is a retired union organizer and currently a visiting scholar at the International Center for Joint Labor Research at Sun Yat-sen University in Guangzhou, Guangdong Province.

Related
Every Union Contract Right Now Should Be the Best Ever »
Could We See a Rail Strike? »
Undaunted by Fines, Massachusetts Teachers Defy Strike Ban »
After Workers Flee China's Largest iPhone Factory, Activists Demand Accountability from Apple »
Ahead of Halloween, Sysco Teamsters Give Corporate Ghouls the Heebie-Jeebies »