Lean In or Stand Up? 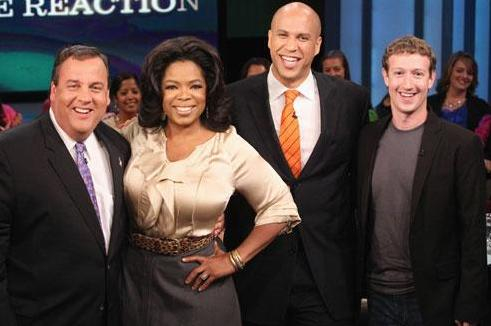 Sheryl Sandberg’s hyper-publicized book Lean In is the Facebook COO’s “sort of a feminist manifesto” and it’s full of engaging, self-critical stories as she tries to trim back her workaholic ways to enjoy her family life. These appear alongside enraging anecdotes about the sexism she and women co-workers endure in the male-dominated tech world, and advice on how to deal with it.

But one anecdote jumped out at me. Sandberg tells the story of a dear friend with 14-month-old twins who cut her paid hours by two-thirds and ended up doing all the household work. Sandberg wants her friend to say yes to an exciting new job offer, advising that it will make the husband step up to his responsibilities.

The job she’s suggesting turns out to be administering a $100 million donation from Facebook founder Mark Zuckerberg to the Newark schools.

Things worked out great for Sandberg’s friend—she took the job and her husband learned to buy groceries. Things didn’t work out so well for the Newark schools.

The $100 million from Zuckerberg had a goal: to institute merit pay in the teachers’ contract. “Highly effective” teachers would get a bonus of between $5,000 and $12,500. Teachers deemed unsatisfactory by supervisors could be disciplined or even fired. (The contract also created two tiers: teachers with masters’ degrees could opt out of the merit pay scheme, and most did.)

Teachers unions have rightly resisted this kind of subjective basis for raises because it rewards brown-nosing and shreds solidarity.

At the same time, Newark Mayor Corey Booker was privately pushing to close schools and replace them with charters, with Zuckerberg’s foundation picking targets. Newark parents rose up in arms when they found out.

Emails released due to a parent lawsuit revealed that Sandberg was heavily involved, corresponding with Booker’s office, which was trying to make it look like the community was engaged, without actually engaging the community.

The emails revealed a desire to spread merit pay to teachers nationally, although Sandberg sounded queasy about emphasizing this. “I wonder if we should basically make this focused on Newark with just a touch of ‘and this will be a national model,’” she wrote.

From Sandberg’s boss’s-eye view of the world, pay-for-performance leads to excellence. Teachers just need incentives to teach harder. In the real world, merit pay schemes increase pressure but don’t actually improve teaching. “It’s not as if teachers are sitting on their best lessons waiting for a bonus,” said public education defender Diane Ravitch in a recent talk.

“Now that components [of the contract] are being implemented,” Newark teacher Brandon Rippey told Labor Notes, “it’s turning teachers’ lives upside down.” He said some supervisors are using the evaluation tool vindictively.

They’re also using it narrowly. Only 5 percent of Newark’s teachers got merit pay in the last cycle, a total of $1.4 million out of the $50 million that was promised over three years. Where’s the rest of the money going? To pay Sandberg’s friend to administer it, for one.

But that’s not the end of the story—Newark teachers angry about the contract formed a caucus and promised a vigorous fight against the billionaires’ agenda. They won 18 of 29 e-board seats and almost took the presidency. Instead of leaning in, they stood up, together.

Which happens to be a pretty good strategy for dealing with sexism, too, Ms. Sandberg.

“Slingshot” is a column where Labor Notes staffers take aim at issues of the day.