‘Give me your tired, but not your poor…’ 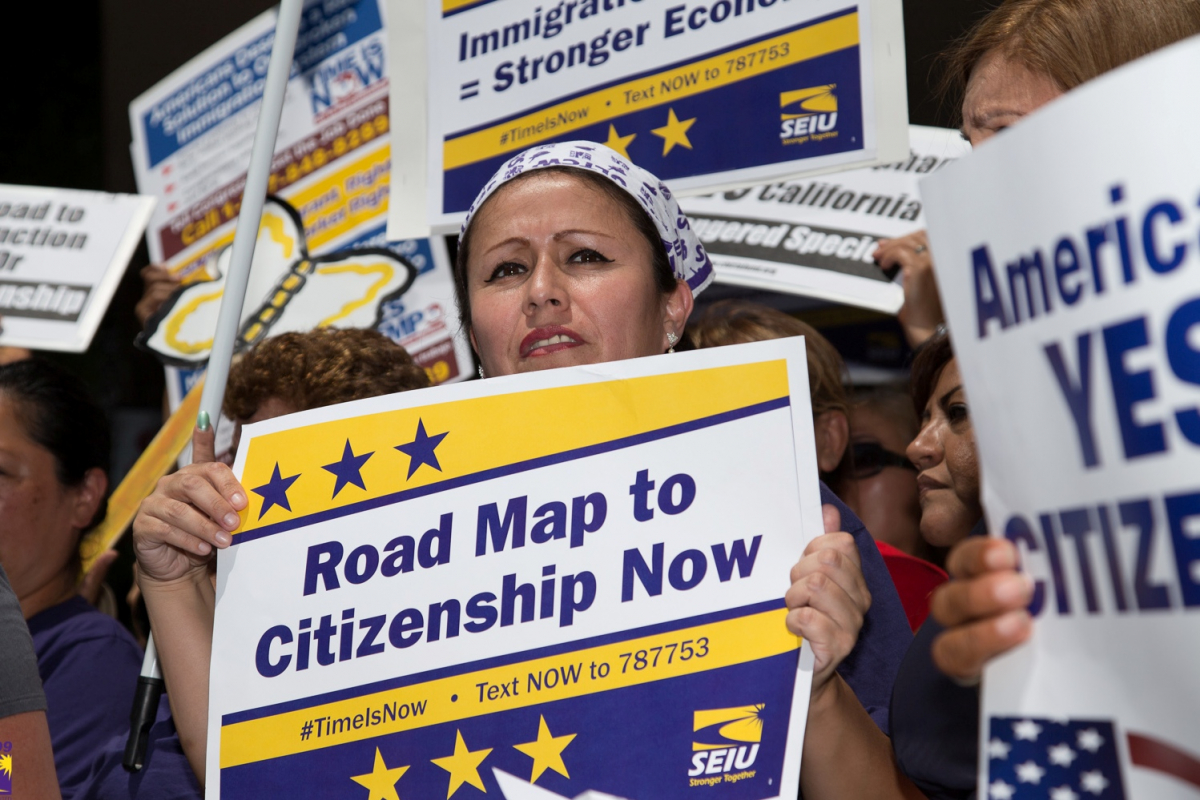 The Senate’s immigration bill has rewritten the Statue of Liberty’s welcoming words.

Yes, it will be a tremendous relief if immigration reform can stop the heartbreak of deportation. Under the Senate's version of the bill, most immigrants without papers could get provisional status while trying to qualify for citizenship, assuming the House doesn’t sabotage the process entirely.

But what about getting undocumented workers the same rights on the job as everyone else?

The “path to citizenship” amounts to a 10-year job probation. After applying for the first phase, you have to stay steadily employed for six years (no more than 60 days out of work) with an income that can’t drop below the federal poverty level ($11.32 an hour for a full-time worker with a family).

Then in the second phase—four more years!—you have to make 125 percent of the poverty level—$14.15, which is more than the median wage in the U.S.

The bill apparently imagines an economy where employers give regular raises. That’s not the U.S., where “job creators” are creating part-time jobs that don’t even pay poverty wages. So you’ll have to get two.

If this stands, the welcome curtailment of ICE raids will be replaced by the more subtle threat that, if you lose your job for any reason, you’ll be derailed from the path to normalcy.

Employers are gonna love this. Consider forklift driver David Acosta, who spoke up against dangerous heat and broken equipment at his Walmart-controlled California warehouse and joined a wage-theft lawsuit. He and his co-workers won improvements by striking—but then he was fired.

If Acosta were undocumented, under the new plan his firing might end any aspirations to change that status. The cost of objecting to dangerous conditions, telling co-workers their rights, striking, or suing, could be a quick boot off the citizenship path and a return to the shadows.

How many would-be workplace heroes will lose their nerve when those are the terms of the deal? (Acosta belonged to Warehouse Workers United. Remarkably, after more than a month of protest, he got his job back June 19.)

Since when is there an income requirement for citizenship?

Many immigrants, from restaurant workers to carwasheros, don’t even make the legal minimum, because of employer wage theft.

Domestic workers in many states don’t have minimum wage protections. And what about immigrant moms raising children—it’s work, but it’s not paid, so how do they even get on the path?

And then you have to be able to prove your income. After five tries, Massachusetts advocates finally won a law that makes day-labor employers tell workers their pay rate. But try that in Texas. There’s a reason wage-stealing employers don’t want to put it in writing.

What’s the message? If you bring capital, you’re welcome. If you bring only your labor, we want you to keep your head down at work while you wait a decade for a decision.

Jenny Brown was a co-editor of Labor Notes.jenny@labornotes.org
Related
Film Review: 9to5, The Story of a Movement »
In a Six-Day Strike, Bronx Produce Workers Doubled Their Raise and Inspired New York »
Goodbye and Good Riddance: Biden Fires Labor Board’s Peter Robb »
Chicago Teachers Are Voting on Whether to Defy Monday's Reopening Order »
Review: Blood Runs Coal Tells the Notorious Assassination of a Mine Workers Union Reformer »