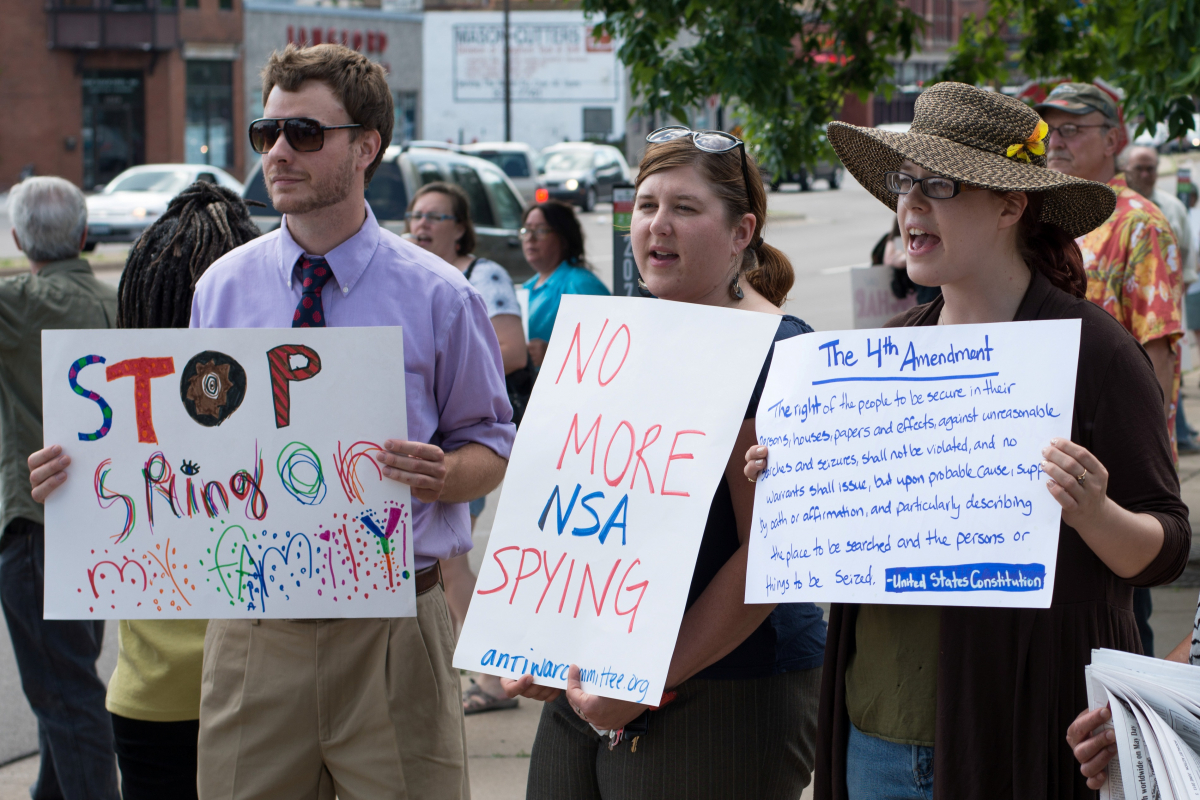 Many are shocked by the indiscriminate U.S. government spying revealed by Edward Snowden, the contract employee who blew the whistle on the National Security Agency in June. We shouldn’t have been. Signs of this program stretch back more than a decade, and received plenty of media attention in 2006.

Much of that attention was due to revelations by a union AT&T technician in San Francisco, Mark Klein, who noticed and documented suspicious activities at his workplace. He wrote and published a book Wiring Up the Big Brother Machine—And Fighting It detailing his experiences. Labor Notes interviewed him last week about what he found then, and about the new revelations.

You discovered some of the mechanics of NSA spying a decade ago. How did it happen?

I was sitting at my workstation in a small AT&T office in San Francisco in the summer of 2002 when we received an email from higher-ups that a representative of the National Security Agency (NSA) would be coming for an unspecified purpose. He talked to one of the non-union management technicians who worked out of that office and were dispatched for special jobs. We quickly learned that this one tech was being given security clearance by the NSA to work in a “secret room” which was being built at a nearby central office at 611 Folsom St.

As it happened, in 2003 our small office was closed in a “downsizing” and we were transferred to that very office on Folsom St., and by chance my main assignment was to oversee the internet room. In the next few months, I took over from the previous tech, who was retiring, and in the process gathered three critical AT&T engineering documents which revealed how the “secret room” on the sixth floor was tapping into the internet data stream flowing through the seventh floor main room.

Critical to this was a cabinet containing “splitters,” which are glass prisms that split the laser light beam that carries the data. Each half of the split carries all the data, effectively making an exact copy of the data, every second of every day. And the wiring documents clearly showed that the copies were being sent to the “secret room.”

Part of my job was to wire up circuits to the splitter cabinet, and also troubleshoot problems on those circuits. In fact, while troubleshooting one such problem with a technician in a distant city, I learned they had similar splitters installed in other cities. I was literally wiring up the “big brother machine,” and I did not like it.

The documents also revealed that they were using a sophisticated, programmable piece of spying gear made by a company called Narus: a Semantic Traffic Analyzer, which, as the name implies can read the content of messages, as well as the addressing information (the from/to part). So essentially the government was getting everything.

I did nothing at that time, but when I retired in mid-2004, I took the documents with me. When the New York Times revealed in December 2005 that President Bush was doing repeated warrantless surveillance on Americans in defiance of the FISA law (Foreign Intelligence Surveillance Act) as well as the Fourth Amendment, I decided to come forward.

When you blew the whistle, what was the media’s response?

In January 2006 I met with the Electronic Frontier Foundation, who by coincidence were already preparing a lawsuit against AT&T, and we quickly joined forces. I happened to meet a reporter from the LA Times who covered Silicon Valley, and he was very interested in the story, so he was the first news media person who I gave the full set of documents, some 120 pages.

In the next few weeks into February he assured me they were preparing a blockbuster front-page story, and I believe he was sincere. However, he soon told me their “top guy” was meeting with the Director of National Intelligence (John Negroponte), and also the NSA, I heard later. I immediately knew the story was in the process of being killed, which is what happened, and now I felt I was in a very dangerous position.

I went to the New York Times in February 2006, and they too were very excited, especially their top-notch investigator James Risen. Soon I sent them the documents, and then they went quiet for a few weeks, so I began to worry again. I got the feeling there was some kind of internal struggle over it, but they finally published a nice article a couple months later.

So finally the dam broke in April 2006 and we were flooded with media requests. But even after this, there were some strange incidents. For instance, in the fall of 2006 we agreed to be interviewed by “60 Minutes” in our first TV network appearance. They flew me to New York, where their reporter Steve Kroft taped an interview with me which I thought went well. But inexplicably, they never aired it.

So instead we got coverage on “ABC Nightline” and “PBS Frontline.” (Links to those interviews are here.)

What was your union's response?

To my knowledge, in public my union, the Communications Workers, said and did nothing on the issue and basically took a dive. But I did get some friendly comments from a couple CWA officials when my book came out in 2009, including a nice card from an official of my former local, and a bold public statement of support from the then-president of Chicago-area CWA Local 4250, Steve Tisza, on his local’s website. I also received some encouraging email from my former colleagues at AT&T.

Quite a few people in your position must have noticed these operations. Why didn't more people go public, do you think?

Did the government try to prosecute you? What did your employer do?

I did not have a security clearance, so the government could not prosecute me for breaking any security oaths. And the documents I possessed were not classified; they were ordinary company engineering documents. In court their tack was to plant seeds of doubt by painting me as an ordinary “line technician” who didn’t know anything and was merely speculating. At the same time, they tried to get the judge to dismiss the lawsuit on “state secrets” grounds, which of course only fueled suspicion.

Meanwhile, they let AT&T do the dirty work: the company threatened to sue me for stealing company documents, and that could have bankrupted me. But in the end they never sued me, probably because they had had enough bad publicity and wanted to get out of court altogether.

What are your thoughts on the newest exposures as a result of Edward Snowden's whistleblowing?

Snowden has revealed a much deeper and broader level of NSA penetration of the internet, the so-called PRISM program, which the documents he released show actually started in 2007 under Bush and expanded under Obama. My revelation had shown the NSA copies data as it flowed across the internet, which gives them a huge amount of everyone’s information. But what was missing was your private account data stored on servers by the various companies (Microsoft, Google, Yahoo, Apple, etc.), data which may not be flowing at the moment.

I think NSA whistleblower William Binney, who as a former insider is much more knowledgeable about this (he actually designed the surveillance system before he quit in late 2001 when it was turned against the domestic population) described it precisely. He says the “dragnet” operation I revealed gives them about 80 percent of the information, but the missing piece, the 20 percent, they get from PRISM. Now they have everything, and we are all stripped naked.

Edward Snowden is a heroic whistleblower who threw away a very comfortable life in order to make a stand for the Constitution and democratic principles. He should be hailed and defended by all who cherish civil liberties. If there was any justice in this country, Congress should give him retroactive immunity for his heroic defense of the Constitution.

But Congress prefers to give such immunity only to the phone companies caught in the illegal spying program: in 2008 Congress, with then-Senator Obama’s help, passed a bipartisan retroactive immunity bill at Bush’s urging, effectively killing the lawsuit against AT&T. That should tell you where Congress, and both parties, stand on this. So it’s no surprise that leading Congresspeople from both parties, e.g., Senator Dianne Feinstein and Speaker John Boehner, are instead shouting “treason” at Snowden. They want to kill the messenger.

In 2011, it was revealed that private contractors working for the government tried to sell their illegal spying abilities to the Chamber of Commerce—information on unions included. What are your thoughts on the role of private contractors?

There are some 250,000 “private” contractors working on top-secret government programs; this was well-documented in a recent book, Top Secret America, by Dana Priest and William Arkin. There’s a revolving door between government officials and these companies. For example, retired rear admiral Michael McConnell moved back and forth between his job as Director of National Intelligence and his other job at the huge contractor Booz Allen Hamilton, where Snowden had worked. And of course there’s tons of money to be made. That’s where your hard-earned tax dollars go.

The root political problem we face is that the two parties, Republican and Democratic, are in it together despite their theatrical public spats. They both, in their own ways and their own styles, serve the interests of big business and the military/intelligence industrial complex. They have locked up the electoral process so that the voice of ordinary working people cannot be heard, and put in place a monstrous surveillance system to spy on the entire population.

Until their duopoly is broken—not pressured from within but literally swept aside from without by some mass independent political force based on the working people—there can be no fundamental progress in this country.

To celebrate the Fourth of July, people in many cities are planning protests to restore the Fourth Amendment: “The right of the people to be secure in their persons, houses, papers, and effects, against unreasonable searches and seizures, shall not be violated...” More info here.