Raising Our Voices in Taksim Square 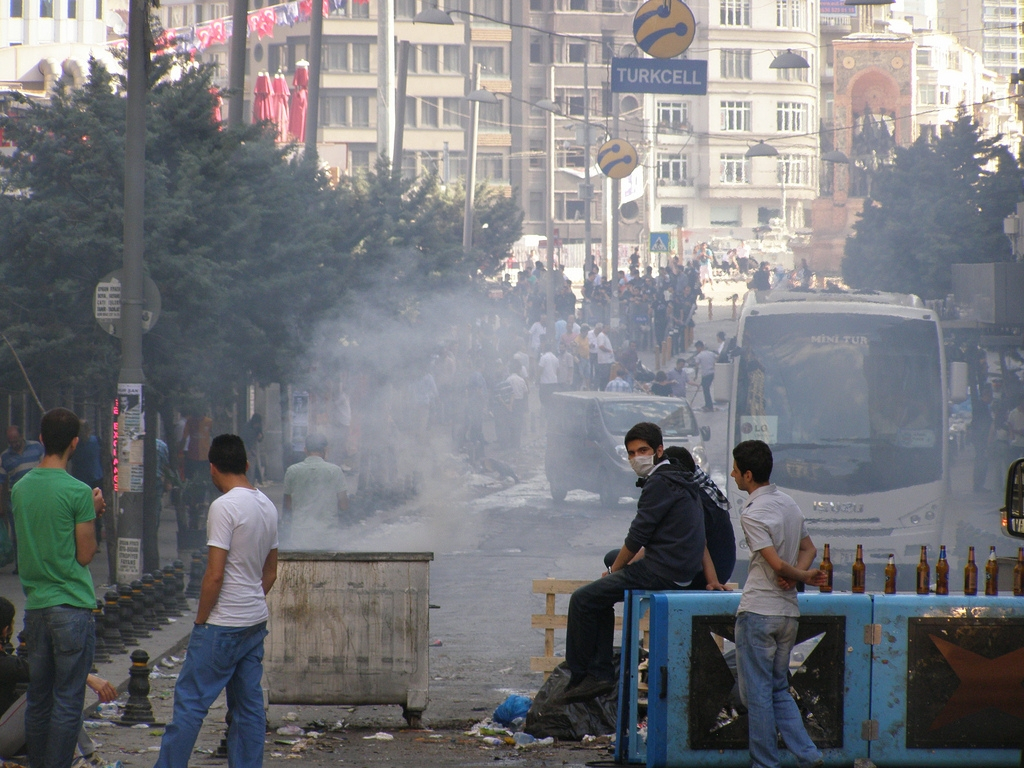 What began in Turkey seven days ago as the takeover of Gezi Park turned into a national uprising from Istanbul to other major cities. A small protest to protect public space – which the government had ordered to be razed to make room for a shopping mall – united a wide range of citizens protesting what they see as the Prime Minister's pro-business, authoritarian, and religious policies. Tomorrow, June 4, the public sector union coalition, KESK, will strike in solidarity with the protests.

This is a first-hand account from Taksim Square in Istanbul, written by trade union leader Kıvanç Eliaçık, originally posted at Equal Times.

My trade union, the Confederation of Progressive Trade Unions of Turkey (DISK), is part of a platform with professional associations and neighborhood organisations.

This platform protests the construction work in Taksim Square, Istanbul, that will demolish the park there, replacing it with a shopping centre.

When I heard that bulldozers came and cut the trees in the park on Tuesday, I ran to the park.

Instead of shutting down the illegal construction – the court revoked the construction project – the police used tear gas against people who want to save the trees.

On that first night, we took tents and sleeping bags and went to the park. We sang and chatted till dawn. In the evening, thousands of people were gathered. A concert took place on a stage.

We were discussing urban regeneration, environmental destruction, human rights and workers’ rights. The highlight of all these discussions was that they are all the result of government policies. An ever-changing and growing committee was established.

When I woke up in the morning the camp was drowned into tear gas and everyone was running around. The police set the tents on fire. They uprooted the saplings that were planted a day before. The bulldozers were working under the protection of riot police.

We did not want to get revenge. Someone was reading a novel to the police using a megaphone that was saved from the fire. Another person was asking “why did you set my guitar on fire?” but by singing.

When we succeeded in entering the park we set up bigger tents. In the evening there were tens of thousands people in the Square. Renowned musicians cancelled their concerts and came to the park.

People from various views came together: people and workers on strike from regions that have been harmed by corporate and government greed; football fans; radical left parties; student organisations; feminists; anarchists; and vegans.

The following night we were better prepared. The garbage was periodically cleared. Volunteer security staff were on patrol. Women were able to walk comfortably in the camp area.

The government’s new alcohol regulations [Turkey’s president is this week expected to approve strict legislation that will prohibit the sale of alcohol in shops between 22.00 and 06.00, ban all alcohol advertising and promotion, and stop new shops and bars from opening within 100m of schools and mosques] converted drinking to a political action. People were chanting slogans, on the other hand they were singing songs, and drinking.

There were thousands of people in the park when the police attacked at 05.00 in the morning. There were no warnings and suddenly we were unable to see anything. We evacuated the park in line with the plan we made earlier.

Clashes in the street continued till morning. I managed to sneak in the park quietly, taking advantage of the tired police. I watched the Bosphorus sipping my tea in the shadow of a tree. I hope it won’t be the last time I see this view.

The protestors tried to enter the park by gathering in back streets again and again. The police prevented them by using excessive use of force. The whole city turned into a rally arena. Some demonstrators walked the Bosphorus Bridge that connects Asia and Europe.

So, who are these people that gathered in the square? It won’t be true to say that these people have common views and common aims. The only common thing was they were angry to the government… The police violence against the youth who wanted to protect the trees triggered people and all the people who are against the government were out on the streets.

Thousands of women and men who have not participated in a political demonstration before clashed with the police till late at night. The entered a new demonstration without even having breakfast.

There were demonstrators from wealthy families, but also unemployed people. There were people from Muslim associations and socialist parties – everyone standing shoulder to shoulder.

People, who sought refuge in the barricades, were tweeting and uploading photos to Instagram. Pupils were drawing nasty graffiti addressing the Prime Minister, Recep Tayyip Erdogan.

I met a couple who were making plans for their wedding in the telephone booth where I sheltered as rubber bullets rained down around me.

For the past five days, a growing number of demonstrators are having fun and demonstrating at the same time without sleeping or resting. The most common slogan chanted by the protestors is “Resign Government!”

Police violence is not driving us away. Fear has been defeated now. We have learned to raise our voice when we are angry.

Some people are fighting, others are dancing. Some are lashing out drunk; others are collecting garbage and treating stray animals.

I do not know what is going to happen tomorrow. But today is a new day and we are all new people.

What am I doing now? While tens of thousands of demonstrators across the country are asking the Prime Minister to resign for many different reasons, I am writing to you on the motor hood of a knocked-over police car.

Kıvanç Eliaçık is the Director of the International Relations Department of the Confederation of Progressive Trade Unions of Turkey (DISK).