A Doomsday Budget, and Starving for Safety 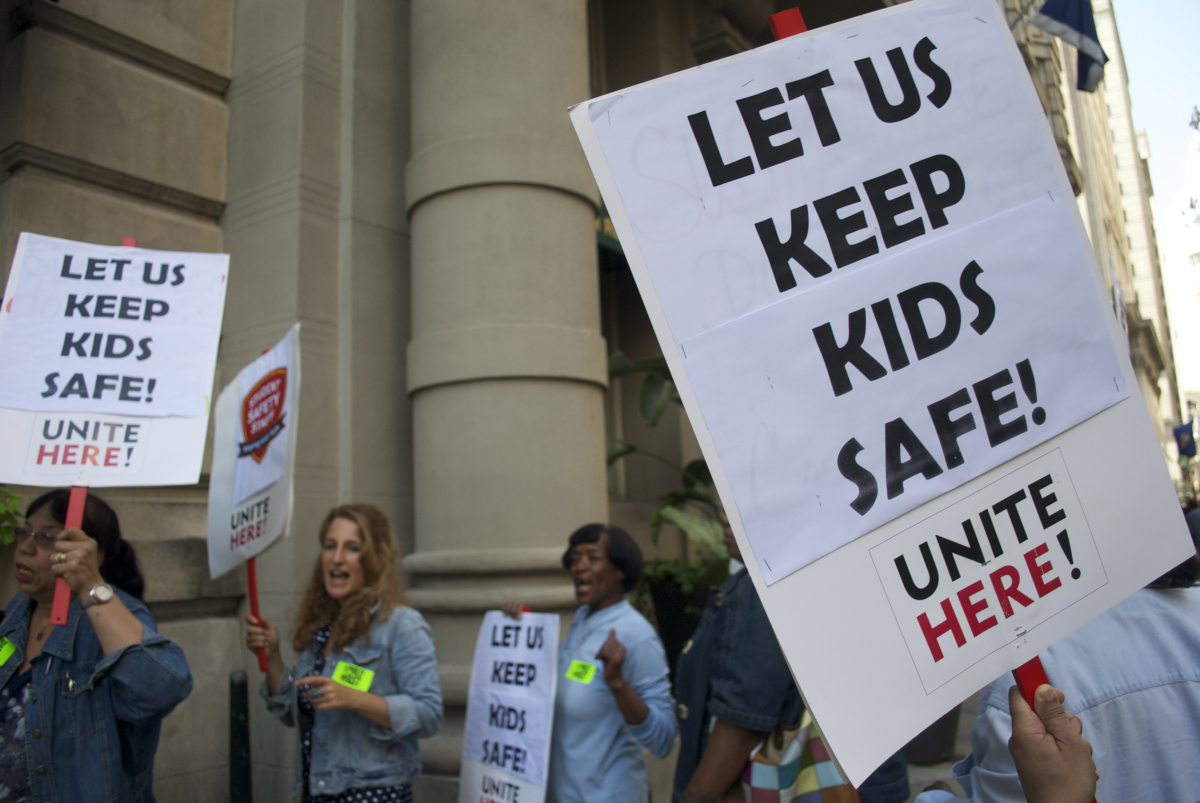 Two Philadelphia parents and two school lunchroom staff have committed to consume nothing but water till the city and the state reverse drastic cuts. The district intends to lay off 1,200 student safety staff. Photo: Dominica Gonzalez.

We’re sitting with four other fasters under a tent outside Pennsylvania Governor Thomas Corbett’s office—one of the busiest intersections in Philadelphia. The parents and staff (members of UNITE HERE) play games, talk with passersby, and get exams from a nurse. Their spirits are high.

But four people—two parents and two school lunchroom staff—have committed to consume nothing but water till the city and the state take action on school safety.

Their demand? To preserve the union jobs of lunchroom staffers, who keep families employed and school children safe. Cuts recently announced by the Philadelphia school district would lay off 1,200 student safety staff.

One faster is Earlene Bly, mother of a ninth-grader, grandmother of a student about to start elementary school, and lunchroom staffer. A school environment, she said, needs to have student safety staff present, to de-escalate potentially violent student conflicts. Without them, she said, “who else will keep my child safe?”

The Fast for Safe Schools (also known by its Twitter hashtag, #phillyfast) launched June 17. Workers such as Doris Hogue, a school safety staff worker for more than 20 years, were quick to mobilize in support.

“We are not just the people who wipe down the tables in the lunchroom,” says Hogue. “We are there to protect the children and make sure they are safe. The kids know us and trust us. We’re the first ones they see in the morning when they come in the door.”

The Philadelphia district has a long history of underfunding and crisis. In 2001, the state bailed out the nearly bankrupt district—on the condition that a five-member board called the School Reform Commission take control. Staffed with two appointees by the mayor and three by the governor, the SRC quickly established its agenda as anti-student, anti-union, and pro-privatization. For the next decade, teacher, parent, and student organizations resisted the SRC.

Their frustration escalated to outrage over the past year, as the SRC pursued a radical program of closing schools, privatization, and staff cuts, all drafted by the Boston Consulting Group.

A newly formed alliance of student, labor, and parent organizations, PCAPS (Philadelphia Coalition Advocating for Public Schools), vigorously protested the closings. In March, despite direct action and the arrest of 17 PCAPS members (including Teachers union President Randi Weingarten), the SRC voted to approve 23 closings—at that time one of the largest mass school closings in a major city in recent history. (The same month, Chicago made a new record by announcing it would close a staggering 54 schools.)

But even after the mass closures, the school system remains drastically underfunded—largely due to state-level budget cuts and inaction by Mayor Michael Nutter. The SRC passed what parent and community groups called a “doomsday budget” May 30, eliminating cafeteria staff, school librarians, assistant principals, and a host of other support staff.

In response, 3,000 high school students organized by Youth United for Change and the Philadelphia Student Union took to the streets—demanding that both the governor and the mayor return to their budgets and find the funds necessary to adequately fund the school system. The PCAPS coalition has proposed numerous ways this could be done: increase state funding, raise the Use & Occupancy tax, change the city’s tax abatement program, or get large non-profits that make a profit to pay their fair share to the city.

‘They Want to Break Us’

PCAPS and its member organizations held a series of events in the past two weeks to demand that the funds be found. The most dramatic is this week’s hunger strike.

The fasters and their supporters see the doomsday budget as part of a national attack on public education, including the recent school closures in Detroit and Chicago.

“This isn’t just about Philly—this is about people in power, people with a lot of money, trying to get rid of the unions and then turn a profit on schools,” says Dominica Gonzalez, a student who spent a day fasting in solidarity with the hunger strikers. “They want to break us.”

The hunger strikers have seen an outpouring of support from others affected by the closures and the doomsday budget. Student organizations, other unions, and community organizations have visited, many of them participating in the evening picket lines. Four members of the Philadelphia Jobs with Justice coalition spent Wednesday fasting in solidarity, and community members are organizing a mass rally on Saturday to stand with the hunger strikers.

Show your support by sending an email to PA Governor Corbett, telling him not to put Philly’s school kids in danger. You can also tweet your support—the hunger strikers are following solidarity messages from around the country through the hashtag #phillyfast.

Penny Jennewein is a member of the Student Labor Action Project at the University of Pennsylvania. Gwen Snyder is executive director of Philadelphia Jobs with Justice.

Related
Troublemakers Schooled in Detroit and Philly »
Teachers Strike against a ‘Heartless’ School Board in Biden’s Hometown »
Review: This Little-Known Black Wobbly Dockworker Led the Most Powerful, Democratic Union of His Day »
Why Did California's Tax the Rich Measure Lose? »
School and Campus Workers Say: Not Until It's Safe »