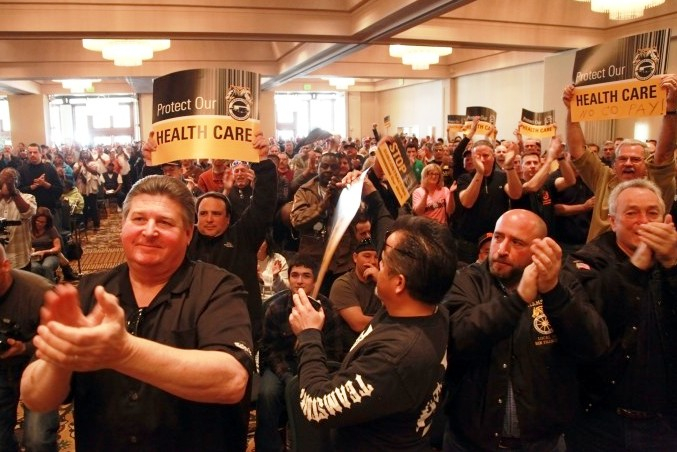 The Teamsters and UPS reached agreement on a five-year contract April 25. After that, it was all rumors till May 7, when the IBT revealed the changes at its “two-man” meeting (two reps from each UPS local).

Chief negotiator Ken Hall said that he’d preserved our “excellent health care benefits” while “protecting them into the future.” The Teamsters website touted “substantial pay raises,” a “significant increase in the starting wage rate for part-time employees,” and “creation of more than 2,000 full-time jobs from the ranks of part-time workers.”

In fact, the agreement will greatly increase out-of-pocket health care costs for 140,000 Teamsters (60 percent of the bargaining unit), let the company continue with harassment, and maintain a permanent underclass of part-timers, at a company that is hauling in nearly $5 billion in profits a year.

As a negotiator on our local rider, I knew that our international leadership had gone into bargaining saying they had specific goals on ending bullying, harassment, and retaliation, and reducing mandatory overtime, while also protecting health care and pensions. I heard over and over about bullying being mentioned at the table and how Ken Hall bothered UPS negotiators with every utterance of the word “bullying.”

Then UPS put health care on the table. Instantly, the union set up rallies all over the nation to change the subject from “bullying” to “no way we pay.” The problem was that our rallying cry was defensive, rather than offensive. The goal now was to maintain.

Hall told the 1,000-plus Teamsters at a rally in Washington state, where I live, that “if the company doesn’t take health care off the table, we’ll see them in July!” (when the contract was set to expire). Hall also hollered, “Teamsters won’t pay $90, $9, or 9 cents!” UPS had proposed that everyone, including part-timers, pay $90 a week of their premium.

These February rallies continued from Seattle to Oakland, then Los Angeles, St. Louis, Indianapolis, Toledo, and more. One word was never mentioned by Brother Hall: “strike.” It was never an option for him.

All I heard after that was how stubborn UPS was being on health care. I then knew that Ken Hall didn’t stand behind his main rallying cry at our meeting in Seattle. Teamster headquarters came out with updates thanking members for coming to the rallies and talking about the company’s position on health care. An April 18 memo called health care “the major issue.”

When the agreement was reached April 25, members I spoke with were relieved. “This means we’re not going to strike,” an Oregon driver told me.

Finally, on May 7, specifics were given. Raises were a total of $3.90 over five years. That’s down from $5 in the 2001-2005 contract and $4 over five years in the last contract. In 2011 Bloomberg Business Week quoted UPS CFO Kurt Kuehn bragging about “a very reasonable contract in place that will show modest, below-inflation increases in wages.” The “below-inflation” bar has now been lowered even more. UPS and Hall are hoping that no one pays attention.

What is really being maintained is a near-permanent underclass of Teamsters, the part-timers who sort and load the packages. Management is very candid about who they’ll hire: they want students. Students stick around till they graduate, with no goals of staying at UPS. I can’t even remember the last time I saw a new-hire over 30.

As the union agreed to essentially a stand-pat contract on other issues, including harassment and overtime, Teamsters for a Democratic Union is finding widespread anger about the health care givebacks enshrined in the new plan.

TDU members and other UPS Teamsters are distributing popular FAQs that break down the complicated health care changes and rising costs.

In Philadelphia, air hub workers have printed up “Vote No” T-shirts that Teamsters are wearing to work and in contract meetings.

A “Vote No on the UPS Contract” Facebook page is drawing a crowd.

Chief negotiator (and James Hoffa heir apparent) Ken Hall had fiercely proclaimed that members would pay nothing for health care. So instead of premiums, 140,000 of the 240,000 UPS Teamsters will pay $400 deductibles and higher co-pays and be shifted to unfamiliar networks.

Retirees now in the UPS plan will pay $300 a month for health coverage for themselves and spouses, up from $50.

Some pensions are frozen and some increased slightly. There are no new penalties for supervisor harassment. UPS will continue to be able to use information from GPS and other surveillance technology to fire drivers on what TDU calls “trumped-up charges” of dishonesty.

For TDU’s analysis of contract changes and non-changes, go here.

Ballots will be counted approximately June 20.

The part-time starting rate in the current contract is $8.50, which is $.69 under the Washington state minimum wage. Now a part-timer’s pay, after 90 days, will be $10, just 50 cents higher than before. Many new hires are on call for a few months, getting called in a few times a week. If you’re lucky enough to get work all five days, your guarantee is only 3.5 hours a day, so a part-timer’s paycheck is very small.

Their health care deductible will now be $400 per year, and it was $0. Providers are now limited, and lab tests, prescriptions, and ER visits will cost more.

Yes, new harassment language has been added, but it doesn’t appear to add any teeth to what was there, and in some cases, it’s worse. As a driver, if you have more than four years’ seniority, to get a 9.5-hour day you have to demand to be on a “9.5 list” (never mind the eight-hour day the labor movement fought and died for). Once you’re on the 9.5 list, a supervisor will assign himself to a three-day ride-along with you, to bully drivers into staying off the list.

In my building, most drivers already avoid the list because of harassment, but for the few on the 9.5 list, the company pays the small penalty and the driver still never gets the 9.5-hour day. They can run drivers 12+ hours, and all the contract language is more hoops to jump through. Without real penalties, this language isn’t worth the paper it’s printed on.

There is little hope of the promised new full-time inside jobs either (where two part-time jobs are combined), since our previous contract language on maintaining such jobs is not enforced.

Honestly, I get paid very well. I make $33.22 per hour, which sounds nice. But I make that wage after working seven years as a poor part-timer before getting a promotion, and then starting my progression to that wage, which was 30 months then but will be four years under the new contract, while calling in at 2 p.m. and 2 a.m. to see if there’s work for me, and usually working three days a week—only getting a consistent five-day work week after 12 years.

And even those standards are ones that many upcoming Teamsters will never experience the luxury of. We have a 10-12-year wait to go full-time now, in my region. Adding four years to get to top scale, our members are half-way into their careers before they make the best pay.

All the while, our company made record profits in 2012, on our backs, with record pay and benefits for our CEO.

Tim Hill is a UPS road driver in Spokane, Washington, and a member of Teamsters Local 690. He serves on the negotiating committee for the Washington State Rider to the national UPS contract and on the Teamsters for a Democratic Union steering committee.

I was part of UPS's underclass for a time, and that's a really good word for it. In my region, central PA, warehouse work is huge. We're a pool of cheap land and labor for the east coast cities. A lot of these jobs are temp or short term, UPS being one of them despite having a union.

When I was hired, there were hundreds of others starting with me. Some college students, but a lot of people who'd lost other jobs or had moved to the area looking for work. There were people commuting over an hour. After a month, I was one of the few left. Getting 9.50 (lucky to be on a special line), I was working 5 hour shifts that mostly were made up of managers standing behind us literally screaming like it was boot camp for us to work faster, no matter how much faster we worked.

Then one day they told us to call in the AM to see if they'd need us. I called and they said nope, call tomorrow. They had me start calling at 3 am everyday and I told them 'hire me or fire me, don't do this'. They said call back at 3 AM, and I just quit calling, though I know that's what they want.

Trouble is, this is the only 'union' a lot of people in the area ever come into. Matter of fact, on our small, temp paychecks, the union took $60 fees out from all of us. They said you could be refunded it if you asked in writing after the season was over. Well I did, but they said that even they couldn't help me get hired permanent at UPS, I had worked 1 day to many to be elible for a refund and that actually, I owed them $60. It made me angry not because of how I was treated (OK, maybe a little) but because it's the treatment that a constantly rotating group of working poor all get.

I'm really sad to see the contract go further in that direction. Working people need strong education to see that contracts like these by design create animosity towards unions.