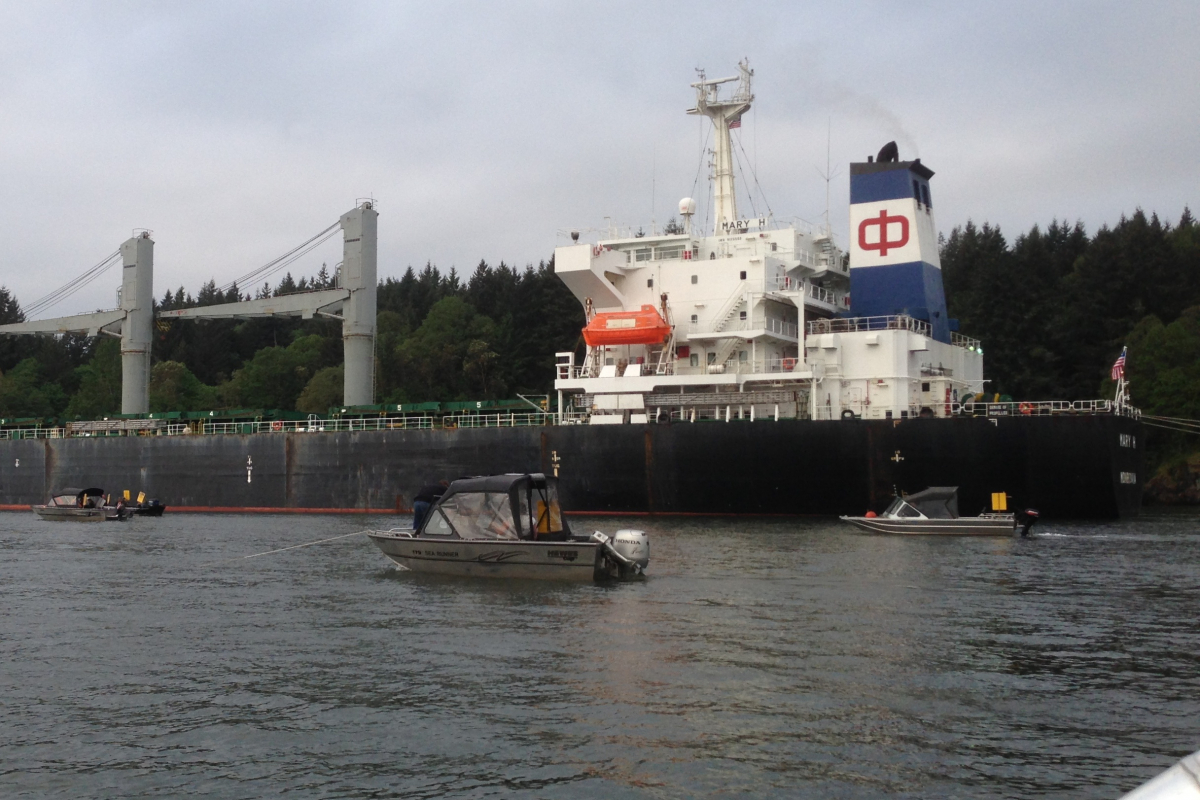 Picketing boats in Kalama surrounded the Mary H, which was carrying grain loaded by scabs in nearby Vancouver.

A flotilla of nine fishing boats—their passengers wielding picket signs instead of fishing poles—blocked the grain ship Mary H from docking in Kalama, Washington, May 7.

At the same time, a community picket onshore turned workers away from the grain terminal. The action by longshore workers and supporters was part of the escalating conflict between the region’s grain shippers and the West Coast longshore union, ILWU.

“Our rank and file were compelled to remind these greedy companies that they can’t simply load a ship with scab labor and expect it not to be marked and protested wherever it goes throughout the world,” said one member.

Nonetheless, Local 21 accepted inferior terms at EGT that set the tenor for negotiations on the union’s master contract for 3,000 longshore workers who handle grain exports along the Puget Sound and Columbia River. (EGT is not a party.) Those talks broke down at the end of 2012.

United Grain and Columbia Grain, two of the four employers in the master contract, took a hard line after talks faltered, imposing their final offers before locking workers out.

The union has pinned its hopes on a temporary agreement reached in February with a third employer, TEMCO, a joint venture between agribusiness giants CHS and Cargill.

It’s not clear, however, how the ILWU plans to force Columbia Grain and United Grain to accept the terms it reached with TEMCO. The day after the flotilla’s successful blockade, the ship docked, and Local 21 members agreed to continue loading it rather than risk taking more aggressive measures.

They vowed to segregate the scab grain from Vancouver with plastic tarps so that dock workers in Japan and other Asian destinations would be able to identify—and potentially refuse—cargo that was loaded non-union.

ILWU locals in the area are now focused on organizing a rally in Portland, which they hope will be a springboard to mass picketing at the port. Other area unions are pledging to mobilize members in support.

Mark Brenner is the former director of Labor Notes and is currently an instructor at the University of Oregon's Labor Education & Research Center.
Related
How Intermodal Yard Workers Doubled Their Pay »
It's Awfully Convenient for Shippers that Longshore Workers Get Blamed for Delays, As Contract Fight Looms »
The Supply Chain Disruption Arrives ‘Just in Time’ »
Bottom-Up Labor Solidarity for Palestine Is Growing »
Insatiable Shipping Companies Set the Table for the Suez Canal Ship Debacle »