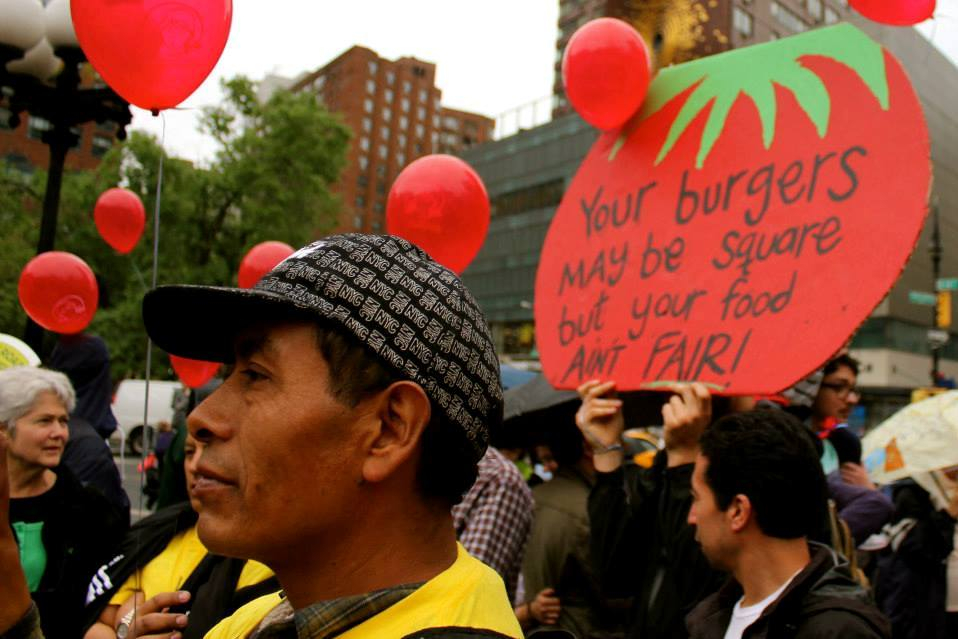 The Coalition of Immokalee Workers marched with supporters in Manhattan on Saturday, warming up for a protest at a Wendy's shareholder's meeting. Photo: CIW.

Wendy’s felt a double dose of worker power at the company’s shareholder meeting in Manhattan yesterday as farmworkers from the Coalition of Immokalee Workers and workers from Wendy’s restaurants gathered outside in successive waves to present their demands.

First up were the Florida workers who pick tomatoes for Wendy’s and other fast food chains. Workers in South Florida’s tomato country have been organizing since the late 1980s, exposing outright slavery as well as the servitude of pennies-per-pound piecework.

Their relentless organizing has signed on 11 restaurant and grocery companies, as well as all major Florida tomato growers, to their innovative Fair Food Program, but Wendy’s has been a hold-out. Taco Bell, McDonald’s, Burger King, Subway and Chipotle have all signed on.

After a rally outside, three worker representatives attended the meeting, using shareholder proxies from the Responsible Endowments Coalition.

CIW’s Gerardo Reyes-Chavez said they listened to presentations on profits and on how the company is redesigning its image, and then asked CEO Emil Brolick to sign on to Fair Food, which would raise the price Wendy’s pays for tomatoes by a penny a pound.

That small-sounding premium almost doubles workers’ pay, which had been stagnant for decades before the CIW started agitating for growers and buyers to sign three-way agreements.

In response, Brolick told the audience the company was already participating, since it buys tomatoes from growers who are in the CIW’s program. He also claimed the company was paying an extra penny a pound, as set forth in the agreement.

But the company doesn’t participate, said Reyes-Chavez. “Anybody can buy tomatoes from Florida; it doesn’t mean that they are enforcing anything,” he said.

The point of the Fair Food Program, he explained, is that the company commits to do something if growers perpetrate abuses, in addition to paying the extra money.

Brolick, in a twist of fate, was the CEO of Taco Bell when it endured a 4-year CIW boycott, and then became the first chain to sign the Fair Food agreement.

At a colorful, noisy rally on Saturday, Farmworkers and supporters held a banner with his words about the agreement in 2005: “Any solution must be industry-wide. …We hope others in the restaurant industry will follow our leadership.”

While farmworkers were making their case inside the fancy Sofitel hotel, fast food workers rallied in front, demanding that Wendy’s pay $15 an hour to New York City restaurant workers. “We can’t survive on $7.25!” they chanted, referring to New York’s minimum wage.

Most of them make little more than the minimum and many make less. A recent survey found that 84 percent of fast food workers in New York experience some form of wage theft. The average fast food worker salary in New York City is $11,000 a year, according to Fast Food Forward, the organization coordinating the protests in New York.

New York Attorney General Eric Schneiderman is investigating the charges of wage theft in fast food and at car washes, his office told the New York Times this week.

Sometimes the theft is wholesale. “I’m tired of working all week, and then my paycheck bounces,” said Marcus Rose, who works at a Wendy’s in downtown Brooklyn. “Will my landlord wait for next week?” he asked the assembled crowd.

He also said his store doesn’t pay the legally required overtime premium. “We shouldn’t have to ask for overtime pay,” he said.

After the wage theft survey was released, a Domino’s corporate representative assured news outlets that any violations were the fault of franchise owners, not the corporation.

While the farmworkers have made progress by cajoling and boycotting highly advertised fast food brands, the restaurant workers have been employing a strategy of short strikes. Two hundred workers from dozens of different restaurants in New York struck for a day in November, and then double that number walked out in early April from McDonald’s, Burger King, Pizza Hut, Taco Bell, KFC, Wendy’s, Domino’s, and Papa John’s.

Since then, fast food workers have held one-day walkouts in Chicago, St. Louis, Detroit, and Milwaukee.

And on Tuesday, hundreds of low-wage workers contracted by the federal government walked off the job in Washington, D.C., clogging a busy intersection and closing restaurants such as the McDonald’s inside the Smithsonian Air and Space Museum. (The museum claims the restaurant stayed open.)

The fast food organizing is funded by the Service Employees union and involves coalitions with local economic justice groups. In New York, the groups Make the Road and New York Communities for Change are leading.

Outside the Sofitel, Gregory Reynoso, who works at a Brooklyn Domino’s Pizza, denounced rampant wage theft. “They take the money we deserve, and they keep it. It’s our money, for our families.”

He appealed to the crowd for help with his managers, who he said were mistreating workers. A group about 40-strong then marched to the subway and took a train to his workplace to sort things out.