Private Sector Better, Cheaper? Not at All 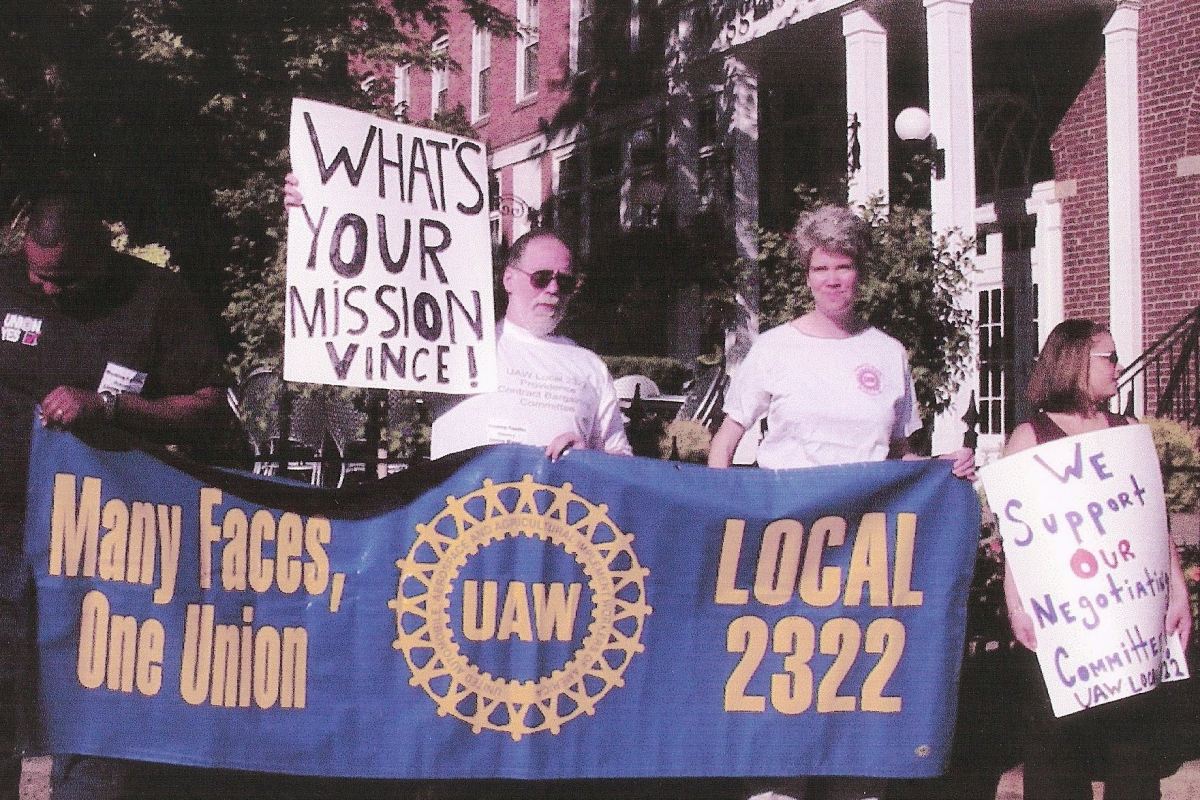 Many nonprofit employers behave just like for-profits. In 1997 the author and his coworkers at Sisters of Providence Behavioral Hospital unionized, picketed—and won their first decent raises. Photo: UAW 2322.

It’s become popular among Republicans (and plenty of Democrats) to decry public workers as overpaid and inefficient. They love to contract out, claiming the private sector can deliver services more cheaply and cost-effectively.

But the reality is quite different.

There is often little or no accountability for the use of these government funds. Stacks of tax dollars are going to private organizations that fail to follow their own missions. Politicians are eager to privatize, and employers are eager to take advantage of lax—and sometimes inefficient or corrupt—regulatory systems.

For example, the locked psychiatric hospital I worked at was always made aware of the date the Mental Health Department would arrive for “surprise” inspections.

I am president of a western Massachusetts local that represents workers in the public sector or at private “nonprofits.” Our members provide inpatient and outpatient services for the Department of Mental Health, shelters for the homeless, early education, higher education, and childcare.

These entities receive the vast majority of their funding, perhaps 75-95 percent, from the state or federal government, most often Medicaid and Medicare. At an event in January, Massachusetts Auditor Suzanne Bump said that “about 80 percent of state spending is under private contract.”

The case of mental health patients is one of the most obvious examples of the misuse of public funds. It is now 20 years since Northampton State Hospital closed its doors, after a state commission recommended shifting mental health services to private vendors. The last of the NSH patients were reassigned to other facilities, such as the private, for-profit Charles River Hospital West.

NSH used to provide care (albeit with a long history of problems) to thousands of Massachusetts residents with mental health issues. By 1993, many patients had already been sent to live in the “community.” Many never adequately assimilated to living there, and were soon living on the streets or died.

This was all supposed to save the state money. But a state audit showed that the restructuring produced no savings—in fact, a loss—and revealed big problems with the quality of services patients received at the new for-profit facility.

Five years later, Charles River Hospital West went bankrupt and closed its doors, and criminal charges over misuse of funds were filed against its owner.

The grand plan for mental health patients has since morphed into another boondoggle, known as Community Based Flexible Support, which has further eroded services and undermined safety for staff and clients. Nor has it reduced costs.

Similar scenarios have played out across Massachusetts and the nation. Services that were once provided by state or municipal workers have been privatized, with disastrous results.

Many nonprofits have chosen a corporate, profit-based model. They handsomely reward upper management while refusing to pay direct-care workers a livable wage or decent benefits.

The CEO of the Catholic hospital where I once worked was making $260,185 in 1995—while direct-care mental health counselors like me made about $16,000.

By 2000, the CEO’s wages had almost doubled to $525,100, while the mental health counselors were at about $18,000—and that was only because we had organized with United Auto Workers Local 2322 and won our first reasonable, regular raises.

Previously, I had received a single, 11-cent raise after three years.

Oddly enough, many of these same agencies have no problem finding money to give generous raises to upper management. At ServiceNet, another agency where our local represents workers, the CEO, CFO, and VP of Clinical Services received salary increases totaling 62 percent, 84 percent, and 63 percent respectively over nine years.

I can safely say our members were lucky if they got half that.

All the Wrong Places

I gladly pay taxes so we can have an infrastructure to support businesses to provide jobs, but also so those less fortunate will have access to services to help them survive and improve their lives—and so human service workers can receive a living wage.

The travesty is that our tax dollars are instead funding attacks on workers, including anti-union law firms and consultants who fight both public and “private” sector workers.

The CEO of Springfield Day Nursery, where we represent teachers, aides, and drivers, spent about $160,000 on anti-union lawyers while the CEO was making about $140,000… then came to the bargaining table claiming they didn’t have any funds for raises for our members.

Tax dollars would go farther if they were used to hire more staff, provide more services, and adequately pay employees—rather than being wasted fighting unions.

Politicians eager to “reform” public spending are looking for savings in all the wrong places. There is something wrong when homeless families are placed in hotels (whose owners have made political campaign contributions) and the state pays outrageous rents that easily exceed the cost of placing those families in an apartment or a house.

There is something wrong when former high-level state employees leave their six-figure positions to take six-figure management positions at “nonprofits.”

Privatization doesn’t spell efficiency or cost savings—it spells a chance for someone to skim a profit off our tax-funded public services. Organizations like the Massachusetts Municipal Association behave just like mini-American Legislative Exchange Councils, feeding anti-worker and anti-union legislation to the politicians who eagerly push it.

We need to hold our government accountable for eroding public services by transferring them to the private sector. If we don’t fight the misconceptions about how and why we need public services, it won’t be long before those services disappear.

Ron Patenaude is president of United Auto Workers Local 2322 in western Massachusetts, which represents close to 4,000 workers in higher and early education and human services.

Correction: The original version of this article omitted higher education workers from the list of those UAW 2322 represents. The text has been corrected to include them.

Related
Ballots Out in UAW Presidential Run-Off »
2022 in Review: Harsh Conditions, Good Surprises »
Challengers Win Big in UAW Elections; Presidency Headed to Run-Off »
Viewpoint: Support Veterans by Defending, Not Defunding, Public Sector Jobs at the Post Office and the V.A. »
Ballots Are Out in UAW Election, with Contrasting Visions of Unionism Up for Leadership »