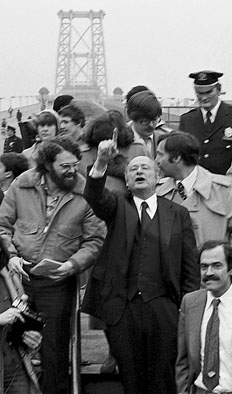 Edward Koch has been eulogized, sanitized, and whitewashed by everyone from Bill Clinton to Al Sharpton in his death, but the truth is that he was an historic arch-foe of working class communities.

Koch, New York City’s mayor from 1977 to 1989, presided during a period referred to as the city’s “fiscal crisis.” It turned out to be a pilot program for the austerity attacks on workers that have become universal today.

The business class had reorganized its approach to society in the early 1970s, taking on new strategies to defeat regulation and to lower its taxes by dismantling the public sector. In the mid-1970s the business community used the fact that New York City was in debt—the crisis—and lowered the rating on city bonds. They then put a committee of bankers in charge to dictate the city’s public policy and budget.

The bankers’ dictatorship lasted from 1976 to 1982. One of its first acts was to impose tuition at the City University of New York, an institution that had been free to working class students for more than a century. What were considered extracurricular programs in public education—including music, art, and athletics—were defunded.

Every city agency was required to reduce staff. City workers got no raises in the bargaining rounds of 1976 and 1978, a pattern that was broken only by the transit strike of 1980. The bankers closed community clinics, firehouses, hospitals, and education programs.

Koch presided over most of the implementation of this so-called crisis. While the bankers were looking over his shoulder, they never had to push Koch—he was ahead of them in his attack on workers and working-class communities.

Koch’s administration of austerity did much to damage union bargaining power. Before the crisis was declared in 1976, public workers were advancing their compensation and benefits in every round of negotiations. After it, bargaining became an opportunity to lose ground.

For example, transit workers averaged 9 percent annual increases between 1966 and 1976. Two bargaining rounds with no raises were followed by the 1980 strike, which won more than 20 percent over two years. But from 1982 onward, transit workers never returned to that level of benefits. Successive rounds of bargaining became an ever-tightening noose of greater givebacks and less compensation—even after the city was later ruled “solvent.”

The height of the fightback among union workers was the transit strike of 1980, led by a rank-and-file movement in Transport Workers Union Local 100. While most institutional leaders, politicians, and labor leaders cooperated with the new austerity, transit workers forced a strike. Koch did his best to defeat them. When buses and subways were shut down, he was out on the Brooklyn Bridge, encouraging people to walk across and “not to let the bastards get us down”—meaning the transit workers.

Despite the mayor’s efforts, transit workers won that struggle—but the world today looks a lot more like the austerity Koch imposed in New York than the world that TWU members were fighting for. Lasting success would have required more than single struggles—one firehouse, one hospital, one contract at a time.

Some critics have noted Koch’s difficulties with the black community. Those problems arose because it was grassroots organizations in the black and Latino communities that led opposition to the banker-imposed austerity. They were at odds with Koch from the very beginning—fighting the closing of a dozen city hospitals and numerous firehouses, and resisting the weakening of city unions and the furlough of city workers.

Through his attacks on city workers, Koch played a pivotal role in reviving occupational Jim Crow—that is, segregation by job—a main component of the economic second-class status of black workers.

Since black workers and other workers of color disproportionately hold public sector jobs, winning civil service systems and unions in public service has been important in the advancement of communities of color (as has the unionization of manufacturing). Though these battles were fought largely under the banner of civil rights, as part of the struggle for black equality, they were also important workers’ struggles.

The rollback of these good jobs—through attacks on the public sector, outsourcing overseas, and the movement of jobs in manufacturing to the right-to-work South—represents a resurrection of occupational Jim Crow. Black unemployment today is double white unemployment, and racial and gender income gaps are expanding.

It is no mystery why Koch had an irreconcilable conflict with communities of color. The creeping resurrection of occupational Jim Crow reflects the long-term effects of his experiments. As the chief executive in charge of the pilot program to attack and destroy public sector jobs, Koch ensured his role in history as a pioneer of neoliberalism.

What he pioneered in New York in the late 1970s and through the 1980s is the system that all workers now face—permanent and advancing austerity. His “accomplishments” mark him as an arch-foe of workers.

Related
Rest in Power, Tim Schermerhorn: Leader of New York Subway Union Reform Effort »
A Life in Transit: ‘What You Can Get Is Set by How Far You Are Prepared to Go’ »
Amazon Workers on Staten Island Clinch a Historic Victory »
Staten Island Amazon Workers Pull into the Lead, While Bessemer Re-Vote Is Too Close to Call »
Texas Union Activists Fight 'Microtransit' Privatization »