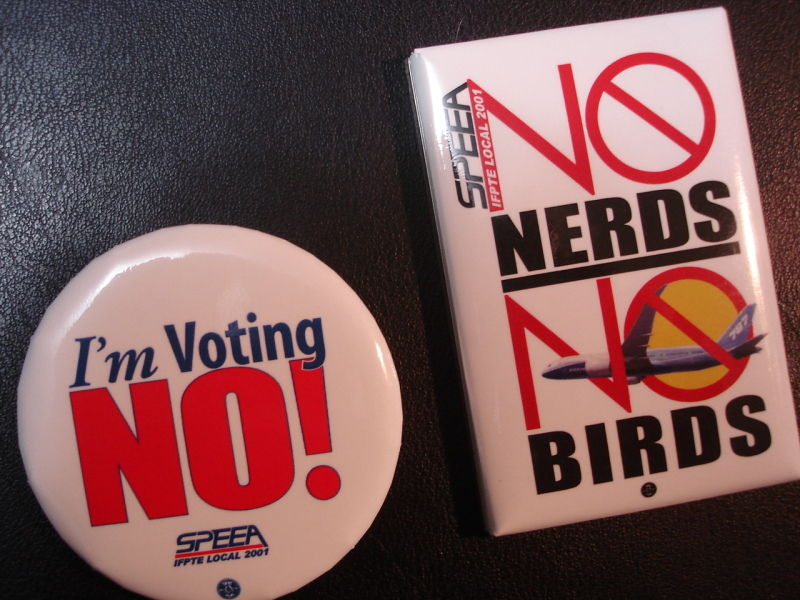 While Boeing engineers and technical workers have been struggling to fix the overheating batteries that grounded the Dreamliner 787, management has been plotting to destroy their pensions.

The company finally riveted the change in place March 18 when the 7,000-worker technical unit approved a contract that would eliminate defined-benefit pensions for new hires.

The union, Society of Professional Engineering Employees in Aerospace (SPEEA), has two Boeing contracts, which allowed the company to divide and conquer. One is for technicians and one for professionals, who are mostly higher-paid engineers.

The technical unit had held out when they voted in February, narrowly defeating the contract and authorizing a strike at the same time that the 15,000-member professional unit narrowly voted yes.

“I’m disappointed. We sold out the new hires and in turn they will sell us out,” commented Tom Georger III on SPEEA’s Facebook page.

Union bargainers had recommended that both groups reject the contracts because of the two-tier pension system. New hires would be relegated to a 401(k), saving the company 40 percent on their pensions, according to SPEEA.

“If you have the pension now, and don’t care what the new hires get, that greed will hit you hard in the future,” commented Chris Johnson. “Boeing has its eyes on slashing your pension next.”

Johnson predicted Boeing will hire lots of new workers in the next few years—many employees are near retirement age—and that these new hires will dilute the votes of workers who want to defend the old pension plan.

The 27,000 Boeing production workers who are represented by the Machinists have been able to retain their defined-benefit pensions.

Meanwhile, Boeing CEO James McNerney is doing double duty: attacking retirement for his own employees and for the whole country at the same time. He chairs the Business Roundtable, which is trying to raise the age of Medicare eligibility to 70. He's protected his personal pension, though. The Washington Business Journal reported that McNerney's personal pension is worth $47.7 million, and that it grew $1.81 million in 2012 alone.

Boeing is flush with cash due to sales of the new energy-efficient Dreamliners, but the aircraft’s mysterious battery problems added uncertainty to the negotiations and may have pushed some members to vote for the contract.

“With the 787 grounded, the future of the company’s at risk, and it made a lot of people nervous,” said Ray Goforth, the union’s executive director. “If it takes a two-year redesign, people were afraid the money on the table might disappear.”

But the battery problems, which caused aviation authorities around the world to ground all 787s, also provided considerable leverage to the union, members said. The company can’t deliver new planes to customers until existing ones are fixed and certified to fly again.

That leverage seems to have been squandered when the vote split. The union had argued for extending the existing contract so workers could focus on the 787’s problems, but Boeing rejected that proposal on January 17, driving the contract to a February vote. The techs voted 53 percent to reject, while the professional unit voted 54 percent to accept.

They had been working without a contract since November, when both units of self-described “angry nerds” rejected the company’s first offer by 96 percent. Boeing then improved raises significantly.

The new offer salvages medical benefits, and the union is proud to have extended pension coverage to same-sex married couples. Washington state recently approved same-sex marriage, and most members live there.

SPEEA held shop floor actions like lunchtime marches and the “10/2 clap.” At 10 a.m. and 2 p.m., workers stopped work and clapped in their cubicles for a minute.

Signs sprouted on workers’ desks, including one that read: “Dear Engineers and Techs: Thank you for the record profits. We are not interested in sharing them with you. Sincerely, Boeing Corporate.”

Although it wasn’t a central issue in negotiations, outsourcing has been a sore issue for SPEEA members, and they blame it for production delays and the 787’s battery problems.

“Boeing corporate created the 787 problems by ignoring the warnings of the Boeing technical community,” said Joel Funfar, a tech on the negotiating team.

He criticized the company’s plan to fix the planes. “They propose to double down on their failed outsourcing strategy by outsourcing the engineering work required to solve the problems caused by previous rounds of outsourcing,” he said.

The batteries themselves are made by a Japanese company. When Boeing’s rampant outsourcing went awry, the company had to spend extra billions developing the aircraft and suffered three years of delays.

Jenny Brown was a co-editor of Labor Notes.jenny@labornotes.org
Related
Viewpoint: We Must (Prepare to) Strike UPS in 2023 »
Who Holds the Power in Joe Biden’s White House? »
Union Hopes High as Chileans Rewrite Anti-Labor Constitution »
How Oakland Teachers Took Control of Our Return to School »
At World’s Largest Hilton, Workers Fight for Jobs, Daily Cleaning »