The Corporations Have Two Parties, Now What? 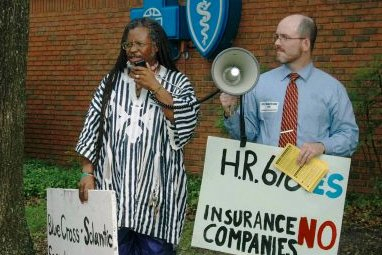 Former Labor Party leaders are encouraging discussion of the legacy and lessons of the Labor Party, founded in 1996. Labor Party activists Kali Blount (left) and Chad Hood speak out against health insurance company abuses in 2009 at a Florida Blue Cross Blue Shield office in Gainesville.

After a brief feel-good moment when President Obama was reelected and some progressive ballot initiatives passed, the labor movement is back to facing familiar reality. That would be our relative powerlessness in the political arena, symbolized by ongoing party bickering and horse-trading that have nothing to do with the needs or desires of the 99%.

How do we reverse this powerlessness? Lately you may have a heard co-worker, or even yourself, muttering “We need our own political party.”

It’s not a coincidence that the last time we had a two-term Democrat in the White House, union activists gained traction in their effort to found a labor-based political alternative—a labor party. In the early 1990s, Tony Mazzocchi of the Oil, Chemical and Atomic Workers led the founding of Labor Party Advocates, a group designed to educate union members about the need for a party unequivocally for working people.

“The corporations have two parties, we need one of our own,” became the slogan.

What happened? Two stalwarts in the Labor Party effort of the 1990s, Mark Dudzic and Katherine Isaac, review the experience in a recent essay, “Labor Party Time? Not Yet.” They’re encouraging discussion of the effort here.

After years of organizing, several international unions and hundreds of locals joined in a raucous 1,600-delegate convention to establish the Labor Party in 1996. Founding unions included the Oil, Chemical and Atomic Workers, the Longshore Workers (ILWU), the Brotherhood of Maintenance of Way Employees, the California Nurses Association, the United Electrical Workers, and the American Federation of Government Employees. Hundreds of locals and central labor bodies joined—eventually representing 2 million workers.

These unions were outraged at corporate free-trade agreements like NAFTA—one of then-president Bill Clinton’s proudest achievements—and disgusted by a Democratic Party that took our work, votes, and money, and gave us nothing in return.

Then as now, the Democratic Party was busy lowering expectations. Then as now, we were told that Social Security and Medicare were just too expensive and needed to be pruned back. Our dreams—be they for full rights on the job, a shorter work week, free college, or a comfortable retirement—are off the table.

“While this is not the time to dust off the Labor Party,” Dudzic and Isaac write, “it certainly is the time for working-class activists to begin the discussion of what it would take to build an independent, class-based political party.”

I think they’re right. I was recruited into the effort in 1995 when I and several co-workers in AFSCME went to a demonstration to support locked-out workers in Decatur, Illinois. I co-chaired a Labor Party committee in my county for ten years. We mostly organized around the Labor Party’s program for single-payer universal health care—what the Labor Party called “Just Health Care”: no co-pays, no deductibles, no denials, and no insurance companies.

Like other chapters, we conducted classes on economics using the Labor Party’s eye-opening curriculum, Corporate Power and the American Dream, and we recruited locals to pass resolutions, hold discussions, and contribute money to build a Labor Party. We solicited individual members, many of whom gave $20 a month to the effort. We pressured our public radio station to carry a Labor Party program on health care. We leafleted moviegoers when Michael Moore’s movie Sicko came out.

We went door-to-door with Just Health Care, even getting our county to place a nonbinding referendum on the ballot. Like other referendums on health care and education conducted by Labor Party chapters, it won handily. It turns out people really want private insurance companies out of health care and they want a “Medicare for all” system. They don’t want an expensive bureaucratic mess like the insurance-company-coddling Affordable Care Act.

Best, we talked with our co-workers and the public about the Labor Party’s program: a guaranteed job for everyone at a living wage, the right to organize and strike without fear of losing your job, a shorter work week, free higher education, paid family leave, guaranteed pensions, a paid year off for every seven years worked, an end to the “corporate abuse of trade,” and more.

“Why not just call yourselves ‘Health Care for All’?” some people asked. “Why the Labor Party?” They said it might scare people away in a southern town like Gainesville, Florida.

We answered that single-issue groups were fine, but we weren’t going to get Just Health Care, or the right to a job at a living wage, or free higher education, or any of the other things we wanted, unless working people had a political vehicle to argue and fight for those things. The Democratic Party doesn’t advocate for them, and will ridicule you if you do.

In fact, the Democratic Party limits the debate and lowers expectations in the labor movement and in the country. The Labor Party could do the opposite, and it did. And it didn’t scare people off—they joined. (The Alachua County Labor Party continues today.)

Dudzic and Isaac look at why the Labor Party faltered and ultimately failed. Primarily, they say, it was founded when the labor movement seemed to be on an upswing, but the optimism was short-lived.

“No matter what individual activists may desire,” they write, “the simple fact remains that you cannot build a party of labor when the labor movement itself is in disarray and retreat.”

Many of the sponsoring unions, battered by NAFTA and downsizing, shrank and merged, while strong locals disappeared as plants closed. The deaths of visionary leaders Tony Mazzocchi and Bob Kasen had a profound effect. The Bush presidency made the Democrats look good by comparison. And during the Bush years many unions were just focused on survival.

More profoundly, the Labor Party wasn’t able to crack the Catch-22 created by a political system locked down by the two dominant parties. “Unions, and working people in general, have real, concrete interests and concerns which must be defended in the electoral arena,” Dudzic and Isaac write. “The prospect of breaking completely with the Democratic Party without an established alternative was too risky for even the most militant unions.”

They rate that the biggest challenge for any effort to build an independent labor politics.

What now? Dudzic and Isaac unearth a suggestion from the Labor Party: that ten percent of our unions’ giant political budgets should go to independent politics. With those resources, they say, “We could begin to mobilize and speak on behalf of a working class that has become fragmented and disenfranchised because of a political system that inexorably distributes wealth and power upward to the ‘one percent.’”

In the discussion of what the labor movement should do next, they argue, the history of the Labor Party is bursting with important lessons.

Several Labor Party activists have responded to the essay, and the authors are encouraging ongoing discussion. Join in at Labor Party Time? A forum to discuss and debate a Labor Party in the United States.