Book Review: With God on Our Side 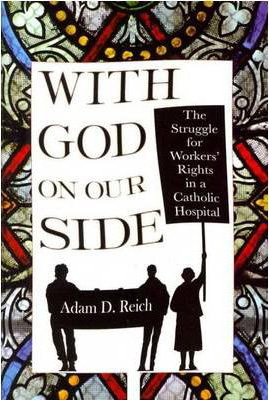 With God on Our Side: The Struggle for Workers’ Rights in a Catholic Hospital, by Adam Reich. Cornell Press, 2012. $26.

Adam Reich looks at the challenges of organizing Catholic hospitals through the lens of the long campaign at Santa Rosa Memorial Hospital in Northern California.

Reading his account took me back to the five years I worked as an organizer with the Service Employees local United Healthcare Workers West (SEIU-UHW) and, later, the National Union of Healthcare Workers (NUHW). I was at the vote count for Santa Rosa Memorial’s union authorization election.

The wait was gut-wrenching, because we knew it would be close. When it turned out union supporters had won, workers, religious and community leaders, and organizers, some of whom had been working on the campaign for five years or more, shared tears and hugs in an emotional victory.

Reich’s book describes the six grueling years it took for hospital workers to win a National Labor Relations Board (NLRB) election—and the social justice unionism that made their victory possible.

‘Something Greater than Self-Interest’

Workers at the hospital in Santa Rosa, a growing city north of the Bay Area, had first mobilized and petitioned for an NLRB election to join SEIU-UHW five years earlier, but they were thwarted by hospital management’s intense antiunion campaign. With support slipping, workers and union staff decided to withdraw from the election, regroup, and plan a new strategy to ensure fair elections without management interference.

In this new phase, according to Reich, who observed and later participated in the campaign as a PhD student at UC Berkeley, workers built support at other nonunion hospitals in the Sisters of St. Joseph Health System (SSJHS), which owned Santa Rosa, and brought together a coalition of labor, community political, and religious leaders.

Union strategists believed that the hospital chain’s antiunion campaigning conflicted directly with its own core values—“dignity, service, justice, and excellence”—and with Catholic teaching, which generally supports workers’ rights to organize. The union chose to focus community attention on this hypocrisy.

The workers also reshaped how they described the kind of union they wanted to be.

Workers in the health care profession commonly take pride in being caregivers. With God on Our Side asks, how do workers in expanding service sectors like health care identify with the question of joining unions today? Do workers see unions differently when they work at not-for-profit and faith-based hospitals? Reich concludes that campaigns must reflect the workplace culture and attitudes.

Even hospital workers who do not directly provide personal care still feel invested in patients’ health and well-being and in the success of the hospital. Nurses and aides work through breaks and meals to make sure patients get all their needs taken care of, especially when the caregivers are understaffed. These workers, whether or not they are Catholic, often appreciate and share the expressed core hospital values.

According to Reich, many workers fear that forming a union will conflict with their patient care priorities and produce an “antagonistic” relationship with their employer. He asserts, however, that organizing can instead be in line with their identity as hospital workers—if unionizing strengthens their role as caregivers and patient advocates.

Reich quotes one worker leader in the book: “For me it was always about building community predicated on love, power and justice. So I wanted to build power, but I want that power to be linked to a vision of something that’s greater than my self-interest.”

Once More, with Feeling

At the peak of UHW’s successful collaboration with SEIU’s international leadership on a national strategy for Catholic hospitals, UHW was close to bringing the SSJHS chain to negotiate over ground rules for union elections.

At the same time, however, serious political differences that had been growing for years between the local union and its international finally erupted. UHW’s insistence on local members’ right to control their bargaining conflicted with SEIU’s plan for centralization.

Reich reveals a bombshell: Six months before SEIU placed UHW in trusteeship in January 2009—stripping the local of its elected leadership and autonomy—the international decided to stop supporting the SSJHS campaign,

According to Reich, SEIU did not want UHW to win organizing victories that might undermine the international’s position in the conflict. It seems this rivalry was more important than organizing nonunion workers.

With the familiar leaders of the local removed, and no interest from SEIU in their campaign, Santa Rosa Memorial workers faced a crisis. But rather than give up, they decided to start yet another organizing drive, this time with the NUHW, the union newly formed by former officials of the trusteed local. NUHW leaders vowed to maintain their original commitment to high contract standards, rank-and-file democracy, and organizing.

Reich concludes that joining the upstart, grassroots union, which had limited resources, created a new sense of urgency and commitment among the workers and may have strengthened their resolve to build a truly worker-controlled, bottom-up organization.

The strength of Reich’s book is his use of workers’ stories and experiences to chronicle the campaign. He shows how workers disagreed, debated, and struggled to formulate their own identities within a bigger labor struggle.

The vote count I witnessed at Santa Rosa Memorial in December 2009 was both a long-awaited victory for hundreds of hospital employees and a broader social justice victory. Community and religious solidarity was critical to sustaining the workers’ organizing effort through many delays and the contentious trusteeship. This kind of social justice unionism, Reich concludes, is necessary for the labor movement to be successful.

A version of this review first appeared in Working USA. NUHW recently announced it will affiliate with the California Nurses. Read more about that news here.

Samantha Winslow is co-director of Labor Notes.samantha@labornotes.org
Related
Inside the Alabama Amazon Union Drive: An Interview with the Lead Organizer »
The BAmazon Loss and the Road Ahead »
Global Cleaning Workers Share Their Struggles as the First Line of Pandemic Defense »
Dispatch from Alabama: The Biggest Amazon Union Drive Yet »
Ohio Auto Parts Workers Strike to Unionize »