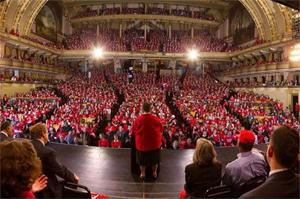 The Chicago Teachers Union filled an auditorium with 4,000 teachers yesterday, in a show of numbers marking the next step in the union’s struggle for educational justice. Photo: CTU|Powell Photography.

The Chicago Teachers Union filled an auditorium with 4,000 teachers yesterday, in a show of numbers marking the next step in the union’s struggle for educational justice.

The teachers marched to join up with the community-labor alliance Stand Up Chicago, which was protesting Chicago’s Mercantile Exchange shareholder meeting. Unions have been bird-dogging the Merc for months because the trading group sucks up $77 million a year in handouts from the state while Illinois chops budgets for childcare, Medicaid, and Head Start.

Teachers in Chicago are preparing for a confrontation with “Mayor 1%” Rahm Emanuel, who has defended the Merc and attacked teachers. He’s closing neighborhood schools, opening charters, and demanding a longer school day with little additional pay for teachers, an idea that Teachers Union activists like Jen Johnson said misses the point.

Speaking at the Labor Notes Conference May 5, Johnson said that unless Emanuel wants to confront class size, the socio-economics of the student population, and a curriculum narrowed to prepare for the battery of tests that students must take, the longer school day is just a bat Emanuel is swinging at teachers, not a serious reform program.

The teachers are talking strike in the fall but they didn’t at the podium Wednesday. Instead, the meeting was a day to show unity. After the state legislature passed unprecedented legislation last year to make striking much more difficult for Chicago teachers, the teachers are showing they’re ready to meet the threshold.

Practice votes in schools are turning out high measures of support for strike action.

The mayor and his education chief are on the defensive. The teachers union had support from more than twice as many people than Emanuel in a recent Chicago Tribune poll, leading him to soften his line in the press.

In an interview with GritTV’s Laura Flanders at the Labor Notes Conference, Jen Johnson emphasized that the fight is not about dollars and cents—it’s about fighting for the kind of schools that all Chicago children need.

Mischa Gaus was the editor of Labor Notes from 2008 to 2012.mischagaus@gmail.com
Related
As Omicron Rages, Teachers and Students Fight for Safety Measures in Chicago and Elsewhere »
Chicago Passes Union-Backed Bill for Civilian Oversight of Violent Cops »
Who Holds the Power in Joe Biden’s White House? »
Will the Stimulus Stop States From Slashing More Jobs? »
Despite Slow Vaccine Rollout, Teachers Are Being Pushed Back Inside »