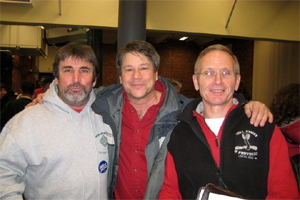 Verizon fired 40 East Coast workers over the weekend for picket-line activity during August’s two-week strike, including John Colleran (left). He said the firings are an attempt to decapitate union leadership and lure members into accepting major concessions.

Verizon unleashed another salvo in the company’s six-month battle against its unionized workers, firing 40 East Coast workers over the weekend for picket-line activity during August’s two-week strike.

The Communications Workers and Electrical Workers (IBEW) say they will fight the firings, and filed Labor Board charges.

The unions represent 45,000 Verizon workers in the Northeast. Almost $1 billion in giveback demands from the company remain on the table despite their strike. Verizon booked $22.5 billion in profits since 2007 and relies on union members to maintain the copper network that moves both landline and wireless calls.

Among the fired was John Colleran, a chief steward in IBEW Local 2222 in Boston. He said the firings are an attempt to decapitate union leadership, singling out stewards and executive board members.

“This is retaliation and retribution for all the years these leaders have been speaking out for other members,” he said. “They’re trying to scare people, and they want to use us as pawns.”

Fired workers believe the company waited until now to fire them in an attempt to use them as leverage to lure the unions into accepting major concessions. Verizon is demanding thousands of dollars per worker in higher health costs, destruction of the pension plan, and unlimited contracting out.

Bargaining has been stalled since members returned to work in late August, and the firings are seen as a bid to demoralize members and force the union’s hand on takeaways.

The fired workers urged fellow members not to take the bait and instead to wage a public fight to return them to work and to knock back the concessions.

Verizon said the firings resulted from “threats of violence, engaging in physical violence, running people off the road, making outrageous profane or racist comments, and more.”

Colleran said the corporation accused him of threatening a manager, but besides launching a few f-bombs, nothing happened.

“I know the rules. We’ve all been through the pre-strike meetings with the lawyers,” he said, adding that police officers were steps away during every incident Verizon alleged on the picket lines—yet saw nothing that caused them to act.

He said the local is considering filing perjury charges against managers who leveled accusations that cost members’ jobs.

Rich Corrigan, a steward in CWA Local 1101 in Manhattan, was fired over similar claims of harsh picket-line comments. He said the company’s allegations are “completely false. It’s depravity.”

“How do these guys sleep at night?” he asked, noting he had had a spotless record in 14 years on the job.

CWA officials said the union was aware of 25 incidents of non-strikers aggressively driving through the picket line and several instances where strikers were hit, which sent three to the hospital.

David Cohen, a retired rep for the United Electrical Workers and an expert on strike settlements, said that under the well-established prohibition of “disparate treatment” in discipline, management can’t single out union members if non-strikers were behaving similarly. The company can’t fire a worker who used profanity while retaining a manager who did the same.

To win the jobs back at arbitration, Cohen said the union must present documentation of threats and aggressive driving by non-strikers.

But the fired workers have no recourse to an arbitrator. In a move that left many members upset, the unions signed a back-to-work agreement in the wake of the strike that didn’t include arbitration rights for at least 88 members Verizon suspended for picket-line actions.

CWA officials later reported on conference calls with members that two-thirds of those suspended were eventually reinstated. All of the now-fired CWA strikers receive $300 a week, plus COBRA health coverage, from the union’s strike fund. Fired IBEW strikers, without a strike fund to rely on, have received support from fellow members at Verizon, along with unemployment benefits.

Cohen said the unions shouldn’t rely on Labor Board proceedings that move at a glacial pace.

“The union is now going to have to rally the support that they had when they were out on strike, to defend these jobs,” Cohen said. “The board won’t be any remedy, so the union has to turn to the community so that they’re not forced into trading things away at the bargaining table.”

In Massachusetts, that mobilization continues apace. CWA Local 1400 is visiting Verizon board member Sandra Moose’s home in a tony Boston suburb for some holiday “caroling for the 99%.” Jobs with Justice is organizing delegations to visit Verizon Wireless stores on International Human Rights Day—December 10—to deliver letters demanding that Verizon respect workers’ rights.