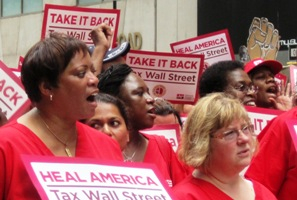 Just as the cherry blossoms fell from their trees as summer began in Washington, D.C., the 170,000 registered nurses who are members of National Nurses United, the nation’s largest nurses union, launched their Main Street Contract campaign.

With its battle cry “Heal America, Tax Wall Street,” the campaign’s chief demand has moved from the political margins to the center.

Nurses say that a small tax—half of 1 percent—on Wall Street’s trading of stocks, bonds, derivatives, currencies, credit default swaps, and futures would raise up to $350 billion a year, enough to help the states close their deficits with billions left to invest in creating jobs.

The tax would also discourage the reckless Wall Street gambling that led to the 2008 meltdown that’s still with us today.

Suddenly the leaders of European states, Nobel Prize economists, and New York Times columnists are endorsing the concept. The White House has been forced to take a position, and while it’s not supportive, the Obama administration offered up an alternative tax on banks—making clear that there’s serious momentum behind the idea.

The White House objects to the tax, saying it could harm pension funds and institutional investors, which would pose problems for unions and their members. But the reality is that taxing the speculative, hyperdrive Wall Street trading that contributed so much to the financial collapse and our deep recession is just as likely to bolster market stability and long-term investments that build solid funds over time.
Why has the “Robin Hood tax”—also called a financial transaction tax and the Tobin tax, after its originator—caught on?

The Occupy Wall Street movement deserves much credit for refocusing the nation on the institutions responsible for the “pain and suffering felt by so many families who feel abandoned,” said Deborah Burger, NNU co-president.

NNU nurses have formed a special bond with the Occupiers over the course of many months, helping staff first-aid stations at encampments from New York City to Washington, D.C., Chicago, and San Francisco. Two NNU nurses were arrested in Chicago when they kept the first-aid station up even as police officers surrounded them and Occupy Chicago protesters chanted their support for the nurses.

NNU has been campaigning against Wall Street since more than 1,000 nurses marched from the White House to the Chamber of Commerce in June. They visited Congress members afterward to stump for the tax.

The nurses see the nation’s economy very much as they would a sick patient. Economic pain among so many millions of people will keep spreading unless there’s a treatment regimen.

In late June, the nurses took their fight directly to Wall Street, where they staged a mid-day protest just outside the New York Stock Exchange. Hundreds of nurses in their red scrubs, brothers and sisters from other unions, and allies from the single-payer health care movement came to push for the tax.

People poured from their buildings over the lunch hour and joined the protest.

In September, the nurses took the message to 65 Congress members’ district offices. In one action, scores of nurses sat down outside arch-conservative Representative Eric Cantor’s Virginia office until a delegation was invited inside.

A march of nurses from NNU and from around the world headed to the G-20 meeting in France in November. Bill Gates offered testimony there favoring the financial transaction tax, and European leaders including French President Nicolas Sarkozy and Chancellor Angela Merkel of Germany backed the tax. Back home, solidarity rallies took place in D.C., Los Angeles, and San Francisco.

On November 30 informational pickets outside British embassies and consulates in six cities backed millions of British public workers who were striking to save their pensions.

NNU pointed out that a financial transaction tax would help fill budget holes dug by the financial collapse.

Related
After Strike Threat, Wisconsin Nurses Get a Possible Path to Union Recognition »
Wisconsin Nurses Set to Strike, As Employer Claims It's Banned from Bargaining »
Stung by Ascension's Union-Busting, Michigan Nurses Gird for Contract Battle »
A Nurse’s Story: My True Cost of the Pandemic »
Labor Must Rise Against Vaccine Apartheid »