Critics of AT&T Contract Back Reform Candidate in CWA 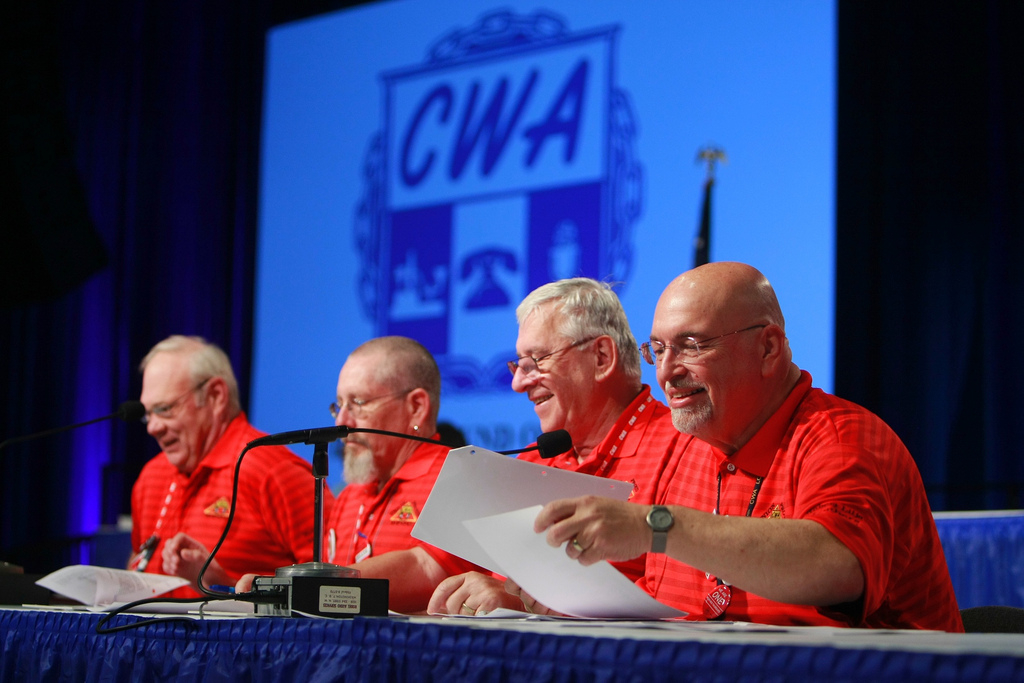 At this week's Las Vegas convention, the Communications Workers (CWA) experienced a rare contested race for a top officer position. For the first time in decades, a local leader ran against the union establishment's candidate, garnering a quarter of the vote. Photo: CWA.

This week in Las Vegas, the Communications Workers (CWA) experienced a rare contested race for a top officer position. For the first time in many decades, a local leader ran against the consensus candidate of the union establishment, garnering a quarter of the vote.

Many delegates who backed challenger Don Trementozzi used his “Save Our Union” campaign to protest the handling of negotiations with the union’s largest employer, AT&T, two years ago.

Trementozzi is a Verizon customer service rep who was elected president of CWA Local 1400 in New England, on a reform slate, in 2003. He is on the regional committee now bargaining with Verizon, the union’s second largest employer, on a contract covering 50,000 CWA and IBEW members from Massachusetts to Virginia. That agreement expires on August 6 and management is seeking major givebacks, in some cases modeled on concessions already extracted from CWA at AT&T.

Trementozzi’s four-state local includes both AT&T and Verizon workers. In February this year, he announced his candidacy for secretary-treasurer by arguing that the union needed someone closer to the membership, “who must deal with rank-and-file concerns every day.”

In 2004, Trementozzi was among those delegates who worked with U.S. Labor Against the War to pass a CWA resolution calling for immediate withdrawal of American troops form Iraq. Local 1400 is also a strong supporter of Jobs with Justice, and its members in Vermont were active in this year’s successful legislative campaign for a single-payer health care system there.

His opponent was Annie Hill, a former phone technician from Oregon who has spent the last 20 years on the union’s national staff or executive board and was responsible for bargaining coordination at AT&T.

In her campaign literature, Hill emphasized her contribution to “building a Legislative Political Action team structure that has done incredible electoral and legislative work,” while raising “almost $500,000 in new COPE money.” Her executive board supporters, like Association of Flight Attendants President Veda Shook, even credited Hill with “a critical role in passing health care reform in America.”

In secret balloting in which 1,100 delegates cast votes based on the size of their locals, Trementozzi won 25.5 percent.

It was the first competitive election for a top officer in CWA since 1998, when the union’s executive board split over a bid by Larry Cohen— then CWA’s organizing director and now its president—to become executive vice president. Cohen won with 52 percent, campaigning on a platform of stepped up membership mobilization and external organizing, union priorities he has stressed throughout his 36-year career.

Running Against a ‘Unity Slate’

While Cohen remains widely respected within the union for his progressive leadership and was re-elected by acclamation this week, Hill became a lightning rod for criticism when unity unraveled at AT&T in 2009-2010.

As Local 1298 business agent Chuck Borchert reported in Labor Notes last October: “Bargaining took place simultaneously at five locations around the country, as each region has a separate contract. The plan was to bargain locally and then, if problems came about, we could all stand together at the national level and be 120,000 strong. Before long, other districts started to fold, one after another, and accept subpar contracts. The smallest bargaining unit, ours—with only 4,000 members—was left standing alone in Connecticut.”

In an open letter to convention delegates this week, Local 1298 President Bill Henderson and two other telecom local leaders also faulted Hill for letting “AT&T finalize a contract deal covering 40,000 wireless workers, when linking their struggle to CWA’s overlapping landline contract mobilization would have given us all much more leverage….New and old members could have struggled together, built a stronger union, and even closed the contract gap between landline and wireless conditions.”

Henderson lamented this “breakdown of union solidarity” when he nominated Trementozzi Monday afternoon. “The impact of our separate AT&T contract settlements is now being felt at Verizon-East,” he said, to much delegate applause. “If we don’t draw a line in the sand here in Las Vegas, I fear we are doomed in CWA’s flagship industry.”

Anetra Session, president of CWA Local 6327, who seconded Trementozzi’s nomination, also expressed concern that benefit concessions by AT&T or Verizon landline employees, combined with lax enforcement of the union’s AT&T Mobility contract, will just make it harder for the union to organize.

“We need the right hand of the president to be the voice of the people we already represent. If we don’t protect our base then anything we grow will collapse upon itself,” Session predicted.

But Trementozzi’s appeal for “ticket-splitting” failed to sway delegates from the union’s flight attendant division, Newspaper Guild, manufacturing sector locals, or public employee bargaining units in New Jersey that Cohen helped organize three decades ago. In these and other parts of the union, Hill benefitted from her running-mate's long coattails.

Save Our Union primarily drew support from telecom locals and IUE-CWA dissenters in upstate New York and New England, plus unhappy AT&T local officers in other parts of the country, including leaders of the largest telecom local in Texas. In an appeal for Canadian delegates’ support, Trementozzi praised the rank-and-file vote that the union’s 8,000 members in Canada use to choose their national director (a system also employed by the Teamsters, United Steelworkers, and CWA-affiliated Newspaper Guild).

There may be additional interest in Trementozzi’s call to study direct elections after convention rule-makers limited “Save Our Union” speakers to just two. They were allotted a total of four minutes to make Trementozzi’s case. There was no time given for either secretary-treasurer candidate to address the delegates before they voted.

The day before, Hill had boycotted a candidates’ forum that Trementozzi supporters arranged. She’d also refused to make a joint appearance with Trementozzi, via conference call or in person, before any group of delegates anywhere else in the country in the months prior to the convention.

Since Cohen reportedly plans to retire in 2015, some Hill critics fear that she may have her eye on the presidency thereafter.

The union has yet to acknowledge that a contested vote even took place, on its website, much less give curious members back home the vote tallies.

Supporters of an opposition candidate for one of four diversity seats on the CWA executive board claimed he was pressured to drop out of the race. Carl Kennebrew from Dayton, Ohio, refused to drop out after a headquarters official warned him he was committing “career suicide.” He ended up getting 133,000 votes to 234, 856 for a candidate on a Cohen-Hill-allied slate.

District 6, which covers the southwestern U.S., will be represented by Local 6222 President Claude Cummings from Texas, who defeated an administrative staffer. Two other incumbent CWA board members survived election challenges in their districts.

Trementozzi and his supporters pledged to keep their Save Our Union website up and running as a source of information about CWA struggles and a vehicle for building a bigger national network of like-minded activists. In her acceptance speech Tuesday, Hill never mentioned her opponent but did admit that “mistakes” had been made in the last round of bargaining with AT&T.

Hill informed delegates that a “Committee of Eight”—composed of four CWA vice presidents and four local presidents (including Henderson)—would meet soon to plan better coordination of AT&T negotiations in 2012. By then, the company may be even larger, if regulators approve its bid to buy non-union T-Mobile, an acquisition which gives CWA a chance to expand its membership base in wireless by another 20,000 workers.

Steve Early retired in 2007 after serving as administrative assistant to the vice president of CWA District 1, international representative, and organizer. He has assisted members of CWA Local 1400 since its founding in 1980, aided Larry Cohen’s campaign for CWA executive vice president in 1998, and was an active supporter of Don Trementozzi’s “Save Our Union” campaign for secretary-treasurer this year.

Steve Early was a longtime Boston-based national union representative for the Communications Workers of America. He has written four books about labor and politics, including Save Our Unions (Monthly Review), and just co-authored a new book dealing with veterans’ issues. He can be reached at Lsupport@aol.com.
Related
Ballots Are Out in UAW Election, with Contrasting Visions of Unionism Up for Leadership »
Video Game and Tech Workers ‘Drop the U-Word’ »
Mike Parker: A Labor Educator with Impact »
Teamsters United Takes the Wheel »
Two Thousand California CWA Members Strike Telecoms Corp Frontier Communications »