Wave of Actions Proclaims ‘We Are One’ 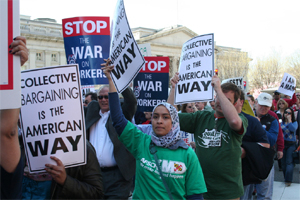 Chanting “we are one!” thousands of activists across the nation marched on Monday—the 45th anniversary of the assassination of Dr. Martin Luther King, Jr.—to resist the attacks on public sector workers and the services they provide. Photo: TWU.

Chanting “we are one!” thousands of activists across the nation marched on Monday—the 45th anniversary of the assassination of Dr. Martin Luther King, Jr.

The events showed solidarity with working people in Wisconsin, Ohio, Indiana and other states “where politicians backed by corporate CEOs are trying to take away the rights for which Dr. King gave his life,” said NAACP President Ben Jealous at the Washington, D.C. rally.

More than 1,000 mobilizations nationally were organized under the “We Are One” umbrella, in which more than a million workers stopped business as usual either at work or after work to join vigils at their workplace, community rallies or marches at statehouses, coordinated by the AFL-CIO and many unions, community, religious and student groups. “We’re putting all employers and all elected officials on notice that we’re mobilizing as we haven’t in decades,” said CWA President Larry Cohen.

On the West Coast, longshore workers shut down the Port of Oakland in solidarity with their brothers and sisters in the public sector.

Hundreds of ILWU members stayed off the job, leaving ships waiting in the San Francisco Bay. Some joined about 75 fellow union activists in attempting to stage a sit-in at the downtown Oakland Wells Fargo offices. They couldn’t get inside; the bank shut the branch down, as a sign on the door said, “due to protests today.”

The action was part of a “Make the Banks Pay” campaign initiated by members of the Oakland Education Association, the city’s teachers union. It is linked to a broader effort involving ACCE (the former ACORN), SEIU Local 1021, and other groups that want to focus on the role of major financial institutions in misusing public funds while continuing to abuse homeowners and blame workers for budget woes.

Protesters demanded Wells Fargo use its power to negotiate forgiveness of the Oakland School District’s debt, currently more than $100 million, which had been securitized and then bought by the bank and subsequently sold, much like the mortgage derivatives.

The protesters also noted that if Wells Fargo CEO John Stumpf donated his $18.8 million salary for a year, that would take care of the teacher layoffs, too.

Demonstrators at the D.C. march, which targeted the 14th Street offices of right-wing funders Charles and David Koch of the oil and consumer products conglomerate Koch Industries, carried signs saying “I Am A Man,” I Am A Woman” and “I Am A Worker,” linking the current struggles with the 1968 Memphis sanitation workers strike King was supporting when he was assassinated.

As the crowd massed outside Koch Industries building chanting “Shame, Shame!” a delegation led by Bob Edgar of the open-government group Common Cause was turned away at the front door. Demonstrators signed an invitation asking the Kochs to “stand for working people and responsible corporate behavior” and taped it to the door instead.

Shortly after the march and rally, an overflow crowd packed the AFL-CIO to hear labor historian Michael Honey, whose new book, “All Labor Has Dignity,” collects Dr. King’s speeches on labor and economic justice.

“The Memphis sanitation workers were fighting for the same things the Republicans are trying to take away now,” Honey reminded the crowd, “the right to bargain collectively and for dues check-off.”

The Memphis workers back then understood, as the GOP does today, that “if your union can’t bargain, then what good is it?” said Honey, who also led stirring renditions of several iconic civil rights movement songs.

Although King today is largely remembered for his “I have a dream” speech, Honey said his research shows that King “was a social revolutionary.”

Honey noted that just before he was assassinated, King called for a general strike in Memphis, telling the crowd of 15,000 there that without its workers the city would grind to a halt and the workers would win their strike.

WALK OUT AT PENN STATE

In Pennsylvania, students at Penn State honored the anniversary by walking out of class in protest of budget cuts that would halve the state’s contribution to higher ed. About 300 turned out for a noon rally along with members of Teamsters Local 8, which represents service and technical workers on campus.

Pennsylvania Governor Tom Corbett’s budget would chop $182 million from Penn State. Tuition, currently $15,000 a year for state residents, could jump by as much as 10 percent. Layoffs have been threatened; and one-third of the heavily state-dependent Agriculture Department already got the boot.

Faculty and staff have had salary freezes in two of the last three years. Penn State President Graham Spanier still makes $800,000 a year, however, fifth-highest among public university leaders in the nation.

“Punishment is being pushed on students and on workers,” said Chris Stevens, a Penn State senior. “We’re hurting people who didn’t do anything wrong, while the people who are to blame, like GE, get away with not paying any taxes.”

Stevens was fresh from “Corbettville,” a tent city inside the student center, set up by groups like United Students Against Sweatshops. They took over the space to make the point that some students will be looking for cheaper housing arrangements if the cuts to state aid go through.

“Students are already questioning whether they can afford to come back next semester,” he said.

Mohamed Raouda, president of the student government council that joins all 24 Penn State campuses across the state, said majors are disappearing, programs are seeing cutbacks, and fewer classes are being offered. He said students were headed to a lobby day at the Capitol tomorrow.

“We’re not going to let politics get in the way of a good education,” he said.

Bill Balderston is a retired member of the Oakland Education Association. Chris Garlock edits UNION CITY!, the e-zine published every weekday by the Metropolitan Washington Council, AFL-CIO. You can subscribe to UNION CITY! here. Mischa Gaus contributed to this piece.

Related
Open Bargaining Brings the Power of Members to the Table in Berkeley »
Union Hopes High as Chileans Rewrite Anti-Labor Constitution »
'We Took Care of Each Other': A Maritime Union's Hidden History of Gay-Straight and Interracial Solidarity »
New Jersey Welfare Workers Sound the Alarm on Safety »
New York City Retirees Fight to Defend Their Medicare Benefits »