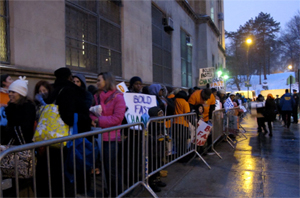 Parents with children in New York City public schools slated for closure tussled with parents bused in by charter schools Tuesday night at a meeting where the mayor's appointees voted to close 10 public schools. Photo: gothamschools.org.

Parents with children in the 26 public schools slated for closure tussled with parents bused in by charter schools Tuesday night. The confrontations took place at the first of several meetings where an educational panel convened by the mayor, who controls city schools, voted to close 10 schools. Fourteen more are expected to have their closures voted on at Thursday’s meeting.

After several scuffles between charter parents and public school parents, the meeting reached a fever pitch when two opposing members on the mayor’s education panel shoved each other on stage and had to be physically separated by the chairman.

The charter lobby and the Harlem Success Academy chain of schools bused in about 1,600 parents for the meeting, feeding them sandwiches and dressing them in orange T-shirts before setting them in line to speak at the public meeting, long before folks from schools up for closure could get to the event. Not one elected official, parent, student, or educator from any of the schools slated for closure spoke in favor.

Charter school parents and children, some as young as kindergarteners, spoke from a common script in favor of proposed charter school “co-locations.” By mid-March, nearly 30 charter schools will be forcibly placed into public school buildings, against those communities’ wishes. These are in addition to the 80 education corporations already given free space in public schools in New York City, forcing kids like those at PS 241 into a sublevel basement, while the Harlem Success charter school students spread out on the upper floors, previously occupied by PS 241 students.

Twenty-five parent protesters, including two members of the City Council, were arrested Monday at a rally opposing school closings when they formed a human chain and shut down a street in lower Manhattan outside of City Hall.

Several hundred rallied in support. Organized and attended mostly by students and parents from schools facing closure, the rally drew a spotlight on the DOE’s failure to support public schools. Some pointed to recent disclosures that the DOE concentrates older students—who are more likely to drop out—in targeted schools and then uses high drop-rate rates to close schools.

Activity has been building since January 21—“Fightback Friday”—when parent, student, educator, and community activists rallied at schools and wore black across the city to oppose the city’s plans to close 26 schools and open more buildings to privately run charter schools.

The day culminated with a press conference on the steps of Tweed, the Department of Education’s headquarters, where a student delivered an invitation to Cathleen Black, the newly appointed schools chancellor, to a city-wide rally on January 27. Black has never worked in education; her background is in magazine publishing. Like the chancellor before her, her lack of qualifications meant she required a special waiver to get the job.

Despite an unusual and unexpected snow day, several hundred protesters gathered for the January 27 rally outside of Tweed and City Hall to stop school closings, stop charter takeovers, defend public education, and say no to privatization.

Parents, students, educators, and community members spoke out against school closings and handed out “The Cycle,” a new flyer from the Grassroots Education Movement group that illustrates the Bloomberg education department’s destructive pattern.

Public schools are destabilized through overcrowding and underfunding, then flawed measures relying on high-stakes tests are used to judge schools. Some of those schools are closed, and charter schools open to siphon off funding and the most-motivated students—setting the cycle in motion again.

Editor’s note: You can follow in-depth coverage of the “School Wars” all week on labornotes.org. See Julie Cavanagh’s piece on the billionaires’ agenda for school “reform,” and another article detailing the billions in public money the privatizers are chasing.

Order the entire package of stories, available in the February issue of Labor Notes, by calling 313-842-6262.

Related
Minneapolis Strike Wins Big Raise For Lowest-Paid Educators »
Collective Action Is How We Shake Ourselves Free of Pandemic Isolation »
School and Campus Workers Say: Not Until It's Safe »
Privatizers Said It Was Impossible for Chicago Teachers to Strike. How Wrong They Were. »
Will the Teacher Strike Wave Hit Chicago Again? »