Now For Something Completely Different: Dispatches from the UE Convention 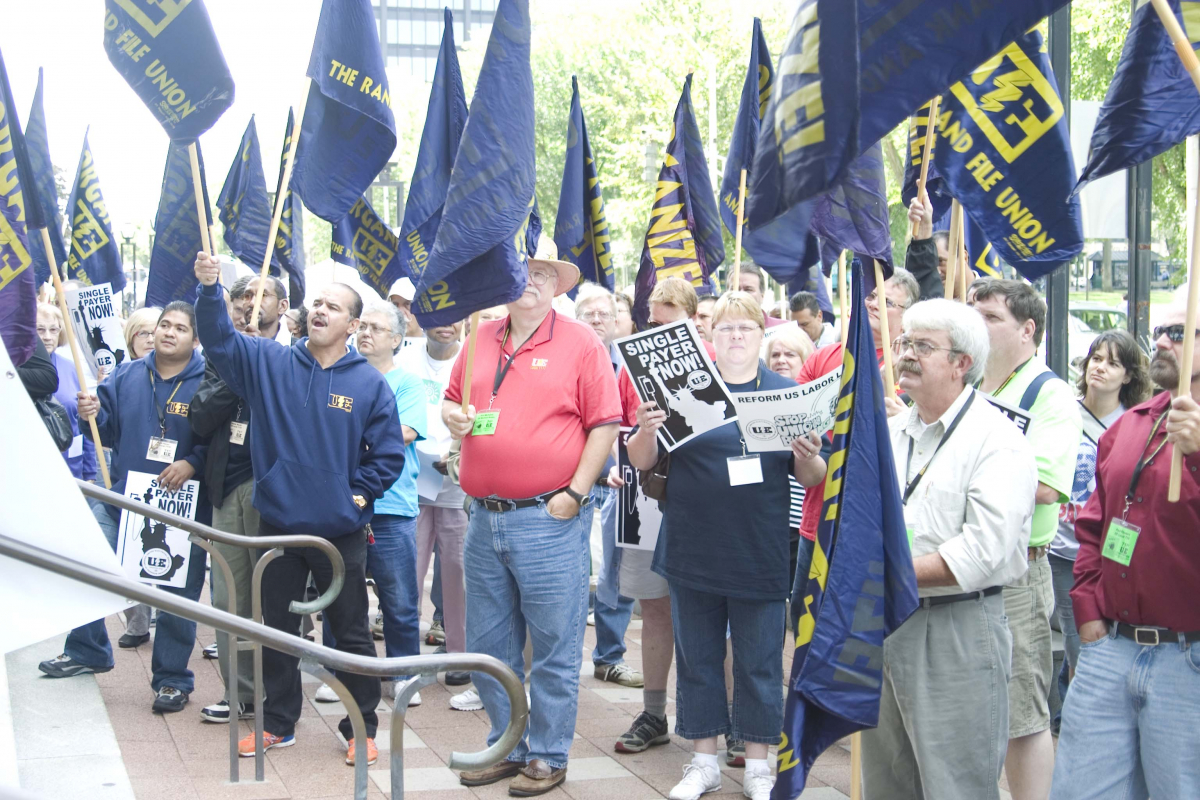 Looking for a break from the palace politics and spit-shine glitz of the AFL-CIO convention in Pittsburgh (where, behind our reporters just hours ago, they turned back on the booming sound system to give tomorrow's speeches a dry run)? Let us transport you to downtown New Haven, where a gathering of a totally different stripe is underway.

One of the scrappiest unions in the country—the United Electrical, Radio and Machine Workers of America—is holding their national convention in Connecticut’s second-largest city (That’s right, Bridgeport is bigger than New Haven, I looked it up).

I never got a satisfying answer about why the Pittsburgh-based UE headed off to New Haven just when the AFL-CIO was setting up camp in their backyard. But after half an hour rubbing shoulders with the rank-and-file members assembled here, there’s no doubt the house of labor could use a healthy dose of the UE’s fighting spirit.

The UE has deep roots in New Haven, representing manufacturing workers at the Sargent lock plant since 1939. The union also had one of its most important strikes here in 1989, the 17-month strike to organize workers at Circuit-Wise (a company making printed circuit boards). More recently public works and Parks and Recreation workers in New Haven voted to join the UE, an important part of the union’s foray into the public sector.

On Monday we kicked off the lunch break (BYO, naturally) marching from the hotel to the Chamber of Commerce. We were there to highlight the nation’s undeclared war on workers who try to organize unions. We shouted down a few Chamber staffers leaving the building (hey, if you sign up to be the clownish face of corporate greed you’re asking for it) and then crossed the town common to City Hall.

UE’s Director of Organization Bob Kingsley was clearly seething as he relayed the almost unbelievable fact that every 23 minutes someone in the country is fired for union organizing. UE members standing next to Kingsley released 60 black balloons, one for each worker fired for trying to form a union that day.

Yours truly was on site to deliver some words about the right to organize, too. I stressed the fact that we can’t rely on Congress to solve our problems. They’ll see the light as soon as they feel the heat—and that requires organizers like the UE activists assembled here to light the fire.

Our feisty rally also took up the cause of single-payer health care, which hits close to home in New Haven. UE members working for the city are facing steep concessions, driven mostly by the skyrocketing cost of health care and the crater-sized hole in the state budget. Members held signs touting the intriguing sum of $38,206,081, which turns out is what the city of New Haven would save if Congress adopted a single-payer health care system.

Although the rally was fun and full of energy, the convention’s afternoon session was really the highlight of the day. The delegates started off with a celebration of the union’s big win at Republic Windows and Doors. Indeed convention badges touted the UE as “America’s Most Valuable Union,” a nod they received from the Nation magazine in the wake of their Chicago factory occupation.

Although the victory lap was well-deserved, delegates didn’t shy away from the hard times ahead. Most of the rank-and-file stories from the stage were about the meat grinder that workers go through when they try to form a union, and the brutal truth that we are losing more than we are winning. But for all their sobriety, most the stories were really about perseverance and the plain but powerful inspiration of workers taking their fate—through the fight for a union—into their own hands.

Sometimes it wasn’t the most eloquent but it was always real. I doubt the AFL-CIO convention planners would pull a move like Ron “Wolfie” Wolfe from the Ralston cereal plant in Lancaster, Ohio. Wolfie was the third speaker from his plant to get up to the podium, but rather than offering any comment on the organizing drive he broke into a huge grin, snapped a picture of the assembled delegates, and let them know he would never forget this moment.

It was also inspirational to see a really different brand of unionism surviving if not quite thriving. When the chair asked every member who had served as volunteer organizer to stand, half of the room was on their feet.

Nick Nichols, a worker at the Hishi plastics factory, really crystallized the experience of a UE convention. In an emotional moment, Nichols said, “My mom always told me when you stand up for what is right people will follow you and help you fight that fight.” But in classic UE fashion, Nichols then reflected on the struggle, noting, “Sometimes we lose because the fear is greater than the fight.” At Hishi plastics, Nichols and his co-workers overcame their fear. Here’s hoping the rest of the working class will follow.

Mark Brenner is the former director of Labor Notes and is currently an instructor at the University of Oregon's Labor Education & Research Center.
Related
Here's How to Join Labor's Anti-Coup Network »
Undergrad Workers Organize Wall-to-Wall at Kenyon College »
New UE Pamphlet Highlights Rank-and-File Control, Calls for Return to 'Them and Us Unionism' »
With a Little Help from My Friends: How Taco Bell Workers and Many More Are Self-Organizing in the Pandemic »
A Worker Agenda Against Coronavirus »